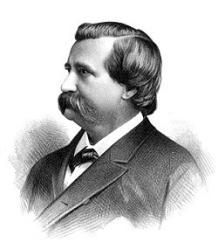 Though blinded by an eye infection at age eight, Geibel was a successful composer, conductor, and organist. Emigrating from Germany probably around 1864, he studied at the Philadelphia Institute for the Blind, and wrote a number of Gospel songs, anthems, cantatas, etc. He founded the Adam Geibel Music Company, later evolved into the Hall-Mack Company, and later merged to become the Rodeheaver Hall-Mack Company. He was well known for secular songs like "Kentucky Babe" and "Sleep, Sleep, Sleep." In 1885, Geibel organized the J. B. Stetson Mission. He conducted the Stetson Chorus of Philadelphia, and from 1884-1901, was a music instructor at the Pennsylvania Institution for the Instruction of the Blind. His works include: