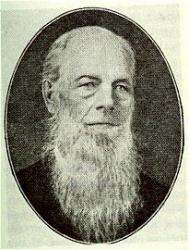 The words and music of this beautiful hymn were first published in a monthly, entitled, Guide to Holiness, a copy of which was sent to me in England. I immediately adopted it, and had it published in Sacred Songs and Solos. It proved to be one of the most helpful of the revival hymns, and was often used as an invitation hymn in England and America."

Hartsough, Lewis. (August 31, 1823--January 1, 1919). Details of his early life are lacking. After being admitted to the Oneida, New York, Conference of the Methodist Episcopal Church in 1851 and serving several pastorates in that state, his health failed and he went to Utah where he was influential in establishing the Utah Mission, later becoming its superintendent. Upon relinquishing that position he moved to Mt. Vernon, Iowa, where he spent the remainder of his life. Bird's statement that he lived in Indiana is erroneous. He was minister of the South Street Methodist Episcopal Church, Utica, New York, when he first became associated with Joseph Hillman, who chose him to act as musical editor of The Revivalist, a gospel hymn book which went through eleven editions in five years, 1868-1872. This book had a remarkable sale and was doubtless used in more churches during the 1870s than any other of similar character. To it the Reverend Hartsough contributed, in one edition, twelve texts, fourteen tunes, and thirty arrangements of tunes, several of the latter being of the religio-folk variety which had been so popular in the early camp meetings. It is a valuable source work.