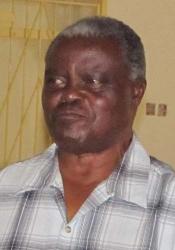 Patrick Matsikenyiri--
Since his retirement from Africa University in Mutare in December of 2002, Matsikenyiri has been teaching in several institutions in the United States by invitation. Some of which are Shenandoah University, VA; Drew University, NJ; Adrian College, MI; which honored him with a Doctorate in 1999. Wesley Theological Seminary, Washington, DC. He also participated in a series of lectures in places like Calvin Institute of Worship in Michigan and Whitworth University in Spokane, WA.

He has helped to make Africa Music become part of the repertoire used in many churches and organizations to the joy and appreciation of many.

Dr. Matsikenyiri attributes his successes to the encouragement he receives from the Administration, Faculty members and students of Africa University, the community of Zimbabwe and the world at large.