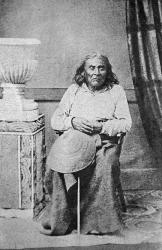 The only known photograph of Chief Seattle, 1864. (from Wikimedia Commons))

In the 1850s, Chief Seattle was a prominent elder of the Duwamish (on his mother's side) and Suquamish (on his father's side) people of central Puget Sound. Settlers named one of their new towns (previously called "New York Alki" and "Duwamps") after the "chief" (as the immigrants called him). He attended, and addressed, a meeting called by Governor Isaac Stevens to determine the best ways to entice the indigenous peoples to settle on territorially limited, resource-poor "Reservations", and a version of his speech at that meeting, published decades later, has become widely known.

Chief Seattle (c. 1786 – June 7, 1866) was a Suquamish Tribe (Suquamish) and Dkhw'Duw'Absh (Duwamish) chief. A prominent figure among his people, he pursued a path of accommodation to white settlers, forming a personal relationship with "Doc" Maynard. The city of Seattle, in the U.S. state of Washington, was named after him. A widely publicized speech arguing in favor of ecological responsibility and respect of Native Americans' land rights had been attributed to him. However, what he actually said has been lost through translation and rewriting.
Wikipedia Biography
TextsTunesHymnals