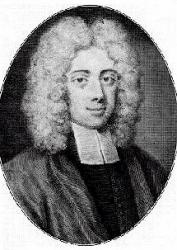 Stennett, Joseph, the earliest English Baptist hymnwriter whose hymns are now in common use, was born at Abingdon, Berks, in 1663. He received a superior education at the Grammar School of Wallingford, and at the age of 22 removed to London, where for several years he engaged in tuition. In 1688 he married a daughter of George Guill, a French Protestant refugee, another of whose daughters was the wife of the celebrated Presbyterian minister, Dr. Daniel Williams, who became a generous friend to Stennett. In the following year he was called to preach by the Baptist Sabbatarian congregation then meeting in Devonshire Square, London, afterwards in Pinners' Hall; and in 1690 became its pastor, a position he retained to his death, July 4, 1713. Since the meetings of this congregation for worship were on the seventh day of the week, he was free to preach to other congregations on the Sunday, which he did very frequently, especially to the General Baptist Church in the Barbican. Such was Stennett's repute for piety, learning and practical wisdom that his advice was very much sought by his Christian friends, and by the "great Whig Lords” of that day he was occasionally consulted as to the feeling of the Dissenters concerning national affairs. His published works include:—
(1) Hymns in commemoration of the Sufferings of our Blessed Saviour Jesus Christ, compos'd for the Celebration of his Holy Supper, 1697; 2nd ed. 1703 (This is entitled in Stennett's Works, 1732, Hymns for the Lord's Supper). These were 37 in number, increased to 50 in the 3rd edition, 1709. (2) In 1700 he published a poetical Version of Solomon's Song of Songs, together with the XLVth Psalm. A second edition, corrected, appeared in 1709. (3) In 1712 he published twelve Hymns composed for the Celebration of the Holy Ordinance of Baptism; 2nd ed. 1722.

Stennett also translated Dacier's Plato and other works from the French, and published several sermons preached on days of National Thanksgiving and other public occasions. His Works were collected after his death and published in 1732, in 4 vols. They contain a Memoir, Sermons and Letters, the Hymns and Poems mentioned above, and a few other poetical pieces. A controversial work, An Answer to Mr. Russen's Book on Baptism, 1702, may be reckoned as a 5th vol. Of his hymns, that which, in the form of varying centos, is most widely known is, "Another six days' work is done". Others in common use include:—
1. Gracious Redeemer, how divine. Holy Communion. Appeared in his Hymns for the Lord's Supper, first edition, 1697. (Works, 1732, ii. p. 98.) Usually abbreviated.
2. Immortal praise be given. Holy Communion. Published in his Hymns for The Lord's Supper, first ed., 1697. (Works, 1732, ii. p. 97.) From this "We'll praise our risen Lord," is taken.
3. Jesus, O word divinely sweet. Redemption through Jesus. Published in Hymns for the Lord's Supper, 3rd ed. 1709, No. 47.
4. Lord, at Thy Table I behold. Holy Communion. This hymn is not in Stennett's Works. From it "With humble faith and trembling heart," is taken.
5. My blessed Saviour, is Thy love? Self-Consecration to God. Appeared in his Hymns for the Lord's Supper, 1697, No. 22. Usually abbreviated.
6. The great Redeemer we adore. Published in his Hymns for Baptism, 1712.
7. Whene'er one sinner turns to God. Holy Baptism. Published in his Hymns for Baptism, 1712, No. 12. From this "See how the willing converts trace" is taken. It begins with st. iii.
Several of his hymns additional to these are given in the older collections, but have passed out of use. We may add that the Joseph Stennett, the subject of this article, had a son, Joseph Stennett, D.D., who also became an eminent Baptist minister, and was the father of Samuel Stennett. [Rev.W. R. Stevenson, M.A.]