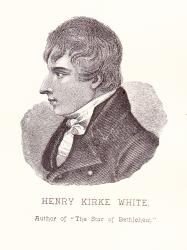 White, Henry Kirke, a gifted English poet who died early in life, was born in Nottingham, England, March 21, 1785. Very early he manifested a remarkable love for books and a decided talent for composition. But his parents were poor, and he was apprenticed in early boyhood to a stocking weaver, from which uncongenial servitude he escaped as soon as he could and began the study of law; but later he was converted and felt called to the ministry. The story of his conversion from deism to Christianity is briefly but beautifully told in the poem titled "The Star of Bethlehem." He entered St. John's College, Cambridge, in 1805 as a servitor; but died October 19, 1806, in the second year of his college course, when only twenty-one years of age. In 1803 he published a small volume of poems. Some of them are very fine, but no doubt he would have produced others far better if he had lived to the ordinary age of man. His rare poetic genius, his victory over skepticism and subsequent faith and piety, his hard struggle with poverty and early death invest the story of his life with more than ordinary pathos. His hymns, ten in number, appeared in Collyer's Collection, 1812.
Oft in danger, oft in woe 412
The Lord our God is clothed with 99
When marshaled on the mighty 124

White, Henry Kirk, remarkable both for the early development of his genius and for the untimely termination of his brief life of splendid promise, was born at Nottingham, March 21, 1785. His father was a butcher, but his mother must have been a superior woman, since for a number of years she successfully conducted a boarding-school for girls. The writing-master in her establishment was for some time Henry's teacher, and under his instruction he made remarkable progress in Latin and other subjects. At the age of 13 he composed the lines "To an early Primrose," which were subsequently printed with his poems. At 14 he left school, and was put to the stocking-frame in order to learn prac¬tically the business of a hosier; but, disliking the employment, he was removed to an attorney's office in Nottingham, with a view to the legal profession. All his spare time was now devoted to literary pursuits, the acquisition of languages, and the composition of poetical and other contributions for the periodicals of the day. At the age of 15 he obtained from the Monthly Preceptor a silver medal for a translation from Horace, and a pair of globes for the best description of an imaginary tour from London to Edinburgh. When only 17 he was encouraged to publish his Clifton Grove and other Poems, which were certainly excellent as the compositions of a mere boy. About this time he was inclined to scepticism, but. through the perusal of Scott's Force of Truth and the arguments and appeals of a young friend, R. W. Almond (afterwards Rector of St. Peter's, Nottingham), he was led to earnest faith in Christianity. His well-known hymn "When marshall'd on the nightly plain" is understood to be a figurative description of his spiritual experience at this period.

He now desired to become a Christian minister, and through the generosity of his employers he was released from his articles in 1804. With the help of the Rev. C. Simeon and other friends, he became a student of St. John's College, Cambridge. There he speedily distinguished himself, and the highest honours seemed within his grasp; but over application to study destroyed his health, and he fell ill and died Oct. 19, 1806, in the 22nd year of his age. Universal regret was expressed at his untimely end. Southey published his Remains, accompanied by a short memoir. Lord Byron composed some beautiful lines on the sad event. Josiah Conder and others wrote commemorative verses. The entire literary young manhood of England and America seemed moved with sympathy. A monumental tablet, with a medallion by Chantrey, was erected in All Saints Church, Cambridge, at the expense of a citizen of Boston, in the United States. Ten hymns are ascribed to H. K. White, which were printed by the Rev. Dr. W. B. Collyer in his Supplement to Dr. Watts's Psalms & Hymns, London, 1812. Of these four of the most popular are annotated as follows: "Awake, sweet harp of Judah, wake"; "Christians, brethren, ere we part"; "Much in sorrow, oft in woe"; “When marshalled on the nightly plain." These are all in extensive use. The rest, all in common use at the present time, are:—
1. 0 Lord, another day has flown. Evening. From this the hymn "0 let Thy grace perform its part" is taken.
2. 0 Lord, my God, in mercy turn. Penitence and Faith.
3. The Lord our God is full [clothed in] of might. Divine Sovereignty.
4. The Lord our God is Lord of all. Divine Sovereignty.
5. Through sorrow's night and danger's path. The Resurrection. Sometimes given as "When sorrow's path and danger's road."
6. What is this passing scene? Human Frailty. This hymn consists of selected stanzas from his “Ode on Disappointment." [Rev. W. R. Stevenson, M.A.]