Abide with me: fast falls the eventide

Abide with me: fast falls the eventide

1 Abide with me: fast falls the eventide;
the darkness deepens; Lord, with me abide.
When other helpers fail and comforts flee,
Help of the helpless, O abide with me.


2 Swift to its close ebbs out life's little day;
earth's joys grow dim, its glories pass away.
Change and decay in all around I see.
O thou who changest not, abide with me.


3 I need thy presence every passing hour.
What but thy grace can foil the tempter's power?
Who like thyself my guide and strength can be?
Through cloud and sunshine, O abide with me.


4 I fear no foe with thee at hand to bless,
ills have no weight, and tears no bitterness.
Where is death's sting? Where, grave, thy victory?
I triumph still, if thou abide with me.


5 Hold thou thy cross before my closing eyes.
Shine through the gloom and point me to the skies.
Heaven's morning breaks and earth's vain shadows flee;
in life, in death, O Lord, abide with me.

Henry Francis Lyte (b. Ednam, near Kelso, Rosburghshire, Scotland, 1793; d. Nice, France, 1847) wrote this text in the late summer of 1847; he died in November of that year (various other stories about Lyte's writing of this text do not appear to be reliable). First printed in a leaflet in 1847, the text was published posthumously in Lyte's Remains (1850). Most hymnals, including the Psalter Hymnal, customarily omit three of the original eight stanzas. The Psalter Hymnal also contains other alterations; for example, stanza 4 originally read, "Ills have no weight, and tears no bitterness."

The text was inspired by Luke 24:29, in which the two travelers to Emmaus ask Jesus to "stay with us, for it is nearly evening." But "Abide with Me" is not a hymn for the evening of a day; instead evening is a metaphor for the close of life, a transition from life's "little day" (st. 2) to "Heaven's morning" (st. 5), which Lyte himself was quickly I approaching. The text is a prayer for God's abiding care when friends fail (st. 1), when everything seems to change and decay (st. 2), when the devil attacks (st. 3), when death approaches (st. 4), and when we pass from this life to heaven's glory (st. 5).

Lyte was orphaned at an early age. He decided to pursue a medical career, although he also had an early interest in poetry. At Trinity College, Dublin, Scotland,[sic. Trinity College, Dublin, Ireland] he was awarded a prize for his poems on three different occasions. While at Trinity, he decided to become a minister and in 1815 was ordained in the Church of England. He served a number of parishes, including Lower Brixham, a small fishing village in Devonshire (1823-1847). Lyte wrote a considerable body of poetry, hymns, and psalm paraphrases, which were published in Tales on the Lord's Prayer in Verse (1826), Poems, Chiefly Religious. (1833, 1845, slightly enlarged posthumously as Miscellaneous Poems, 1868), and The Spirit of the Psalms (1834, 1836). Because of ill health Lyte made winter visits to the French Riviera from 1844 until his death there in 1847.

Abide with me, fast falls the eventide. H. F. Lyte. [Evening.] The history of this hymn to the date of its first publication, is given in the prefatory Memoir to his Remains by his daughter, Anna Maria Maxwell Hogg, London, Rivington, 1850, pp. ii., iii., as follows:—

"The summer was passing away, and the month of September (that month in which he was once more to quit his native land) arrived, and each day seemed to have a special value as being one day nearer his departure. His family were surprised and almost alarmed at his announcing his intention of preaching once more to his people. His weakness, and the possible danger attending the effort, were urged to prevent it, but in vain. ‘It was better,' as he used often playfully to say, when in comparative health, 'to wear out than to rust out.' He felt that he should be enabled to fulfil his wish, and feared not for the result. His expectation was well founded. He did preach, and amid the breathless attention of his hearers gave them the sermon on the Holy Communion, which is inserted last in this volume [i.e. the Remains], He afterwards assisted at the administration of the Holy Eucharist, and though necessarily much exhausted by the exertion and excitement of this effort, yet his friends had no reason to believe it had been hurtful to him. In the evening of the same day he placed in the hands of a near and dear relative the little hymn, 'Abide with me,' with an air of his own composing, adapted to the words."

A note to the sermon referred to in this extract says, "Preached at Lower Brixham, Sept. 4, 1847." He died at Nice on the 20th of the November following

The text of this hymn, which is usually regarded as the original, is that contained in his Remains, published in 1850. There are, however, several readings of the text. These readings are given in:—
1. A facsimile of the original manuscript in the autograph of the author, published by the Vicar of Lower Brixham, on behalf of the restoration of the church.
2. A leaflet on which it was first printed at Berryhead in September, 1847.
3. Remains, &c, 1850.
4. Miscellaneous Poems, 1868.
The variations of text are:--

In addition to these the hymn has also been published by J. Wright and Co., Thomas Street, Bristol, 1863, with Lyte's original music; and it has been translated into many languages, including Latin renderings in the Guardian (Nov. 1879 and Dec. 1881), Church Times, Memorials of T. G. Godfrey-Faussett (1878), Hymnologia Christiana Latina, &c.
The important position which this hymn has attained in many lands and tongues will justify an extract from Mr. Ellerton's note to the same in Church Hymns (folio edition 1881). In that collection it is given with the "General Hymns." Mr. Ellerton says:—

"It is sometimes [nearly always] classed among evening hymns, apparently on the ground of the first two lines, and their similarity in sound to two lines in Keble's ‘Sun of my soul.' This is a curious instance of the misapprehension of the true meaning of a hymn by those among whom it is popular; for a very little consideration will suffice to show that there is not throughout the hymn the slightest allusion to the close of the natural day: the words of St. Luke xxiv. 29 are obviously used in a sense wholly metaphorical. It is far better adapted to be sung at funerals, as it was beside the grave of Professor Maurice; but it is almost too intense and personal for ordinary congregational use."

The use of this hymn is very extensive in all English-speaking countries. It is found in almost every collection published in Great Britain, during the past thirty years.

All tunes published with 'Abide with me: fast falls the eventide'^ top

According to an edition of the British Weekly, in the late summer of 1847, after preaching his final sermon, knowing his time on earth was drawing to a close, Henry Francis Lyte “walked in the valley garden in front of the home, then down to the rocks, where he sat and composed. It was a lovely sunny day and the sun was setting over distant Dartmoor in a blaze of glory. On the left lay Brixham harbor like a pool of molten gold, with its picturesque trawling vessels lying peacefully at anchor. After the sun had set, Lyte returned to his study. His family thought he was resting, but he was putting the finishing touches to his immortal hymn” (Bailey, The Gospel in Hymns, 171). Later that fall, Lyte passed away, but his hymn has indeed endured through the years as a beloved hymn of peace and prayer in the face of change. Theodore L. Cuyler once relayed a story in which a dying woman recited this hymn as she lay in bed during her last hours. He writes, “As I came away from that room, which had been as the vestibule of heaven, I understood how the ‘light of eventide’ could be only a flashing forth of the overwhelming glory that plays for ever around the throne of God” (Sankey, My Life and Sacred Songs, 57). What a beautiful image when we see the light of day ebbing – this light is only a shadow of the light of life that shines forth from Christ.

This text, written by Henry F. Lyte near the end of his life, was inspired by Luke 24:29, in which the travelers to Emmaus tell Jesus, “stay with us, for it is nearly evening.” Many hymnals have in the past mistakenly placed this hymn in a section of hymns meant to be sung in the evening. However, though the text refers to the darkening hour, “evening” is a metaphor for the close of one’s life, not a reference to the ending of the day. Most modern hymnals omit three of the original eight stanzas.

Some sources claim that William H. Monk wrote his tune, EVENTIDE, in just ten minutes at a committee meeting for the 1861 edition of Hymns Ancient and Modern. Lyte’s text had no tune, so Monk sat down at the piano and wrote one. Others claim that he wrote the tune during a time of great sorrow, while watching the sun set.

Paul Westermeyer considers EVENTIDE to be Monk’s most characteristic tune - that is, ‘never vulgar, never extravagant, often distractingly dull,’ and bordering on the sentimental. It can have this tendency, especially when taken too slow. Even though it’s a tune for generally solemn occasions, be sure it doesn’t drag. Use light accompaniment to help keep the tempo moving.

This hymn of comfort is often sung at funerals or memorial services, during healing services, Easter vigil services (especially stanza four), or on New Year’s Eve. It’s an acknowledgement that though our lives are always changing, sometimes in joy and sometimes in sorrow, God remains steadfast. It is thus a perfect hymn of response to an assurance of this steadfastness, and would also be a good song with which to end a service.

For a choral arrangement try either an arrangement by Donald Busarow, Victor Johnson or Jack Schrader. 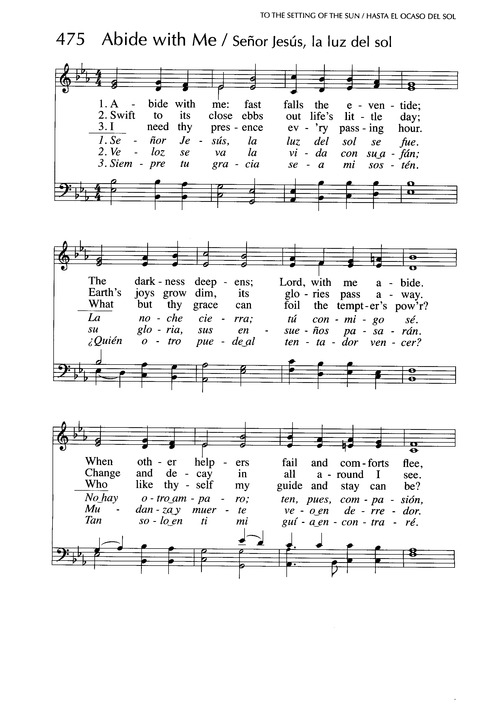 Great Songs of the Church #33

Hymns for a Pilgrim People #467

Oramos Cantando = We Pray In Song #21

The Book of Hymns #2

The Hymnal for Worship and Celebration #419

The Song Book of the Salvation Army #670

The Willard Hymnary #20a