Refrain:
We'll walk in the light!
Beautiful light!
Shine where the dewdrops of mercy shine bright.
Oh, shine all around us by day and by night,
Jesus, the light of the world.

Written by the great hymn writer Charles Wesley (PHH 267), this text was published in three stanzas in Hymns and Sacred Poems, compiled in 1740 by Charles Wesley and his" brother John. James Montgomery called it "one of Charles Wesley's loveliest progeny.”

Titled "Morning Hymn" by Wesley, it is unusual in that it does not contain the customary reference to the previous night's rest or to the work and dangers of the day ahead. The text begins by placing the focus entirely on Christ, the "light of the world," the sun of Righteousness who rises with healing in his wings"; he is the "Dayspring" and "Daystar." Thus the "light of Christ" is to fill our lives and lead us forward "to the perfect day."

Liturgical Use:
As a morning hymn during the Easter vigil service and during Advent; other services that have as their theme Christ as "light."

Christ, Whose glory fills the skies, Christ the true, &c. C. Wesley. [Morning.] First published in J. and C. Wesley's Hymns and Sacred Poems, 1740, p. 61, in 3 stanzas of 6 lines, and entitled "A Morning Hymn" (Poetical Works, 1868-72, vol. i. p. 224). In 1776, A. M. Toplady included it, unaltered, in his Psalms and Hymns, No. 296, and for many years it was quoted as his production. Montgomery, however, corrected the error in his Christian Psalmist in 1825. Its extensive use in the Church of England, and by Nonconformists, is due mainly to Toplady and Montgomery. The latter held it in special esteem, and regarded it as "one of C. Wesley's loveliest progeny." In its complete form it was not included in the Wesleyan Hymn Book until 1875. Its use is very extensive. The hymn:—"Thou, Whose glory fills the skies," as found in the People's Hymnal, 1867, No. 570, is the same hymn with slight alterations. In the Society for Promoting Christian Knowledge Church Hymns, the doxology is from the Cooke and Denton Hymnal, 1853; stanzas ii. and iii. have also been used in the cento "O disclose Thy lovely face," q. v. It has been rendered into Latin by the Rev. R. Bingham, in his Hymnologia Christiana Latina, 1871, as "Christe, cujus gloriae." The American use of the original is extensive.

French romanticist composer Charles F. Gounod (PHH 165) wrote LUX PRIMA, which means "first light" in Latin. When the Franco-Prussian War broke out in 1870, Gounod left his native Paris and settled in England for five years. This sturdy tune was published in the Scottish Hymnary in 1872. It uses sev…

All tunes published with 'Christ, Whose glory fills the skies'^ top 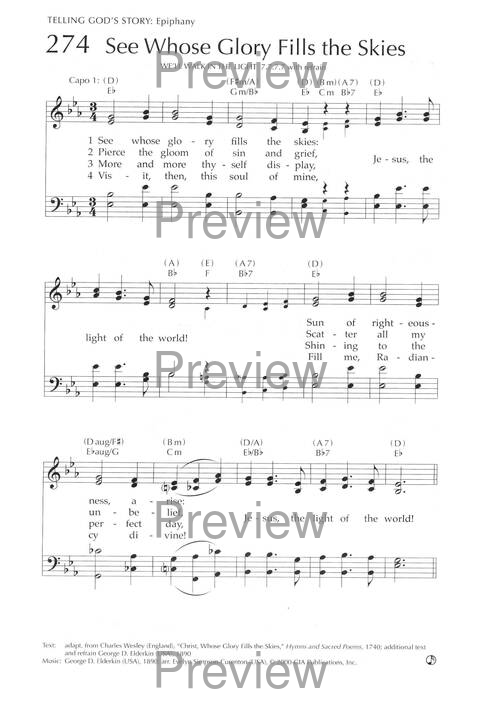 Hymns for a Pilgrim People #155

Hymns of Glory, Songs of Praise #578a

Hymns of Glory, Songs of Praise #578b

Hymns of the Christian Life #38

The New English Hymnal #234a

The New English Hymnal #234b

The Song Book of the Salvation Army #412