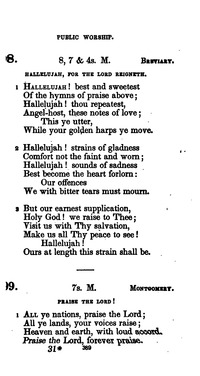 1 Alleluia! best and sweetest
Of the hymns of praise above!
Alleluia! thou repeatest,
Angel host, these notes of love.
This ye utter,
While your golden harps ye move.


2 Alleluia! Church victorious,
Join the concert of the sky!
Alleluia! bright and glorious,
Lift, ye saints, this strain on high!
We, poor exiles,
Join not yet your melody.


3 Alleluia! strains of gladness
Suit not souls with anguish torn:
Alleluia! sounds of sadness
Best become our state forlorn:
Our offences
We with bitter tears must mourn.


4 But our earnest supplication
Holy God, we raise to Thee:
Visit us with Thy salvation,
Make us all Thy joys to see!
Alleluia!
Ours at length this strain shall be.

Source: Church Book: for the use of Evangelical Lutheran congregations #20

Translations in common use:—
1. Alleluia! best and sweetest. Of the hymns of praise above. By J. Chandler, first published in his Hymns of the Primitive Church, 1837, No. 59, in 4 stanzas of 6 lines, as the first of two renderings of the hymn. This translation is found in a great number of collections with the first two lines complete, but usually with a few alterations in the rest of the hymn.

All tunes published with 'Alleluia, best and sweetest'^ top 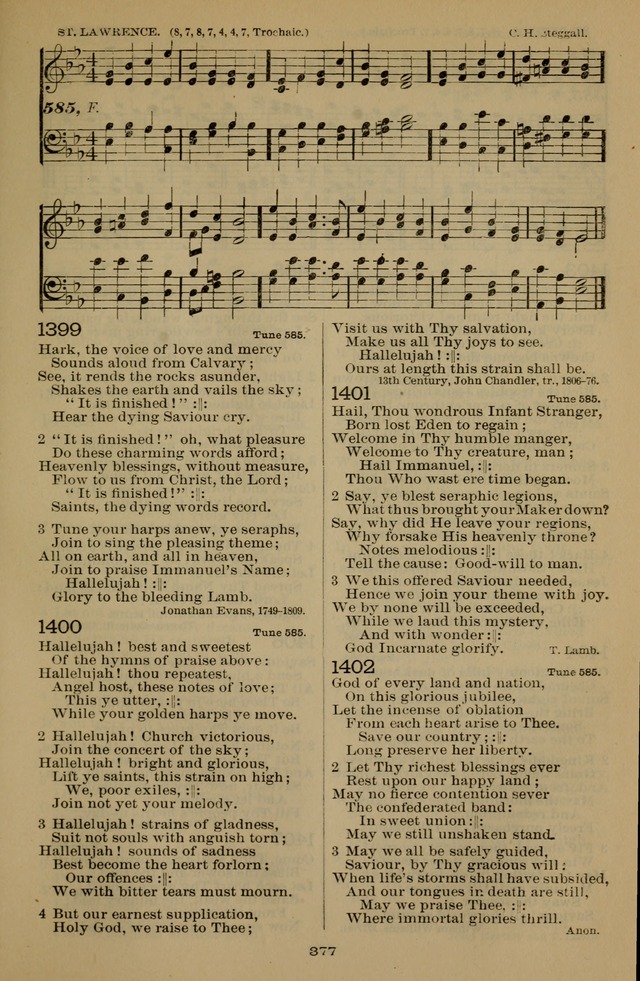 View Page
The Liturgy and the Offices of Worship and Hymns of the American Province of the Unitas Fratrum, or the Moravian Church (1908), p.561
^ top

Hymn and Tune Book for the Church and the Home and Services for Congregational Worship. Rev. ed. #d19

Hymns and Songs of Praise for Public and Social Worship #1393

Hymns for Church and Home #288

Hymns for Public Worship in the Diocese of Fredericton. 2nd ed. #d2

Hymns for the use of the Evangelical Lutheran Church, by the Authority of the Ministerium of Pennsylvania #31

Offices of Worship and Hymns #1400

Plymouth Collection of Hymns and Tunes; for the use of Christian Congregations #1232

Sacred Songs for School Use #44

Songs for Social and Public Worship #910

Songs for the Sanctuary, or Hymns and Tunes for Christian Worship #b1165

Songs for the Sanctuary, or Hymns and Tunes for Christian Worship #1165

Songs for the Sanctuary; or Psalms and Hymns for Christian Worship (Baptist Ed.) #1165

Songs for the Sanctuary; or, Psalms and Hymns for Christian Worship (Words only) #1165

The Heavenly Choir #114a

The Hymnal of the Reformed Church in the United States #d23

The Liturgy and the Offices of Worship and Hymns of the American Province of the Unitas Fratrum, or the Moravian Church #1400

The Students' Hymnal; hymns of praise, with selections from scripture for reading and chanting #19