As with Gladness Men of Old

As with gladness men of old

1 As with gladness men of old
did the guiding star behold,
as with joy they hailed its light,
leading onward, beaming bright;
so, most gracious God, may we
evermore be led to thee.


2 As with joyful steps they sped,
Savior, to thy lowly bed,
there to bend the knee before
thee whom heav’n and earth adore;
so may we with willing feet
ever seek thy mercy seat.


3 As they offered gifts most rare
at thy cradle rude and bare,
so may we with holy joy,
pure and free from sin’s alloy,
all our costliest treasures bring,
Christ, to thee, our heav’nly king.


4 Holy Jesus, ev’ry day
keep us in the narrow way,
and, when earthly things are past,
bring our ransomed souls at last
where they need no star to guide,
where no clouds thy glory hide.

Most British hymn writers in the nineteenth century were clergymen, but William C. Dix (b. Bristol, England, 1837; d. Cheddar, Somerset, England, 1898) was a notable exception. Trained in the business world, he became the manager of a marine insurance company in Glasgow, Scotland. Dix published various volumes of his hymns, such as Hymns of Love and Joy (1861) and Altar Songs: Verses on the Holy Eucharist (1867). A number of his texts were first published in Hymns Ancient and Modern (1861). Bert Polman… Go to person page >
^ top

Inspired by the Epiphany gospel, Matthew 1:1-11, William C. Dix (b. Bristol, England, 1837; d. Cheddar, Somerset, England, 1898) wrote this text in 1858 while recuperating from illness. The text was first published in A. H. Ward's Hymns for Public Worship and Private Devotion (1860). The following year it was published in both Dix's Hymns of Love and Joy and Hymns Ancient and Modern.

Taking Matthew 1: 1-11 as his theme for stanzas 1-3, Dix likens the journey of the wise men who came to worship the Christ to our own Christian pilgrimage. The pattern of these stanzas is "as they … so may we." Stanzas 4 and 5 are a prayer that our journey on the "narrow way" may bring us finally to glory where Christ is the light (Rev. 21:23) and where we may perfectly sing his praise.

Most British hymn writers in the nineteenth century were clergymen, but Dix was a notable exception. Trained in the business world, he became the manager of a marine insurance company in Glasgow, Scotland. Dix published various volumes of his hymns, such as Hymns of Love and Joy (1861) and Altar Songs: Verses on the Holy Eucharist (1867). A number of his texts were first published in Hymns Ancient and Modern (1861). In addition to the two printed in the Psalter Hymnal (also 406), another popular hymn by Dix is "What Child Is This."

As with gladness men of old. W. C. Dix. [Epiphany.] "Written about 1860 during an illness" (E. MSS.) and first printed in a small collection of hymns for private circulation, entitled Hymns of Love and Joy, and then in the trial copy of Hymns Ancient & Modern. In 1861 it was published in 5 stanzas of 6 lines almost simultaneously in the St. Raphael’s Hymnal, Bristol, and in Hymns Ancient & Modern. From that date it has been incorporated in nearly every new hymnal and in new editions of the older collections in all English-speaking countries. Very slight variations in the text are sometimes found, as in the revised edition of Hymns Ancient &. Modern, 1875. The author's authorized text is in Church Hymns, 1871, and Thring's Collection, 1882. This hymn was brought into great prominence by Sir Roundell Palmer (Lord Selborne) in his paper on English Church Hymnody, at the Church Congress at York in 1866:—

"Of writers still living (the names of many, and of some very eminent, will at once occur to my hearers), I do not feel called upon to make myself, in this place, either the critic or the eulogist. But I may be permitted to say, that the most favourable hopes may be entertained of the future prospects of British Hymnody, when among its most recent fruits is a work so admirable in every respect as the Epiphany Hymn of Mr. Chatterton Dix; than which there can be no more appropriate conclusion to this lecture, 'As with gladness men of old.'"

An anonymous hymn—"As in Eastern lands afar"—given in Holy Song for all Seasons, London, Bell and Daldy, 1869, in 4 stanzas of 8 lines, is based upon, and is an imitation of "As with gladness men of old." We have not met with it elsewhere.

An early form of the tune DIX was composed by Conrad Kocher (b. Ditzingen, Wurttemberg, Germany, 1786; d. Stuttgart, Germany, 1872). Trained as a teacher, Kocher moved to St. Petersburg, Russia, to work as a tutor at the age of seventeen. But his love for the music of Haydn and Mozart impelled him t…

All tunes published with 'As with Gladness Men of Old'^ top

This hymn is a prayer for God's presence in our lives as we draw closer to Him. The Magi showed faith in God and eagerness, as well as sacrifice, in their journey to see the Christ-child. So may we live as though we really believe and eagerly look forward to the day when we shall one day see Him. In the third stanza, the gifts of the Magi are not even named. The Magi took the trouble to bring “gifts most rare” on a long journey. So may we “All our costliest treasures bring, Christ, to Thee, our heavenly King.” This pilgrimage is not easy, so we sing, “Holy Jesus, every day keep us in the narrow way,” remembering that Jesus said, “For the gate is narrow and the way is hard that leads to life, and those who find it are few” (Matthew 7:14, ESV).

William C. Dix wrote this hymn in 1858 during an illness. It was published in 1861 in Hymns Ancient and Modern. Dix is also well-known for another Christmas text, “What Child Is This.”

“As With Gladness” is a prayer. The first three stanzas all have a similar structure “as they … so may we,” comparing the journey of the Magi to our Christian pilgrimage. In the third stanza, Dix does not even name the gifts of the Magi, unlike some other well-known hymns (including his own “What Child Is This”). The focus is on the sacrifice of the Magi in taking the trouble to bring the expensive gifts on a long journey. The fourth stanza is a more direct petition, asking Jesus to keep us faithful to the journey begun in the first three stanzas. The fifth stanza, which is omitted in some hymnals, describes heaven – the destination of our journey.

Besides the omission of the fifth stanza, the most significant change sometimes made to the text is to eliminate references to the manger in stanzas two and three. Despite tradition, the clues in the biblical account indicating that the Magi did not come to the manger (which is, incidentally, not mentioned at all in Matthew's account) make it more accurate to refer to the “infant bed” or “cradle.”

This hymn is always sung to the tune DIX. Conrad Kocher, a German composer and church musician, originally wrote a longer version of this tune for a German chorale, “Treuer Heiland, wir sind hier,” which was published in 1838. William H. Monk omitted one phrase and altered a few notes of Kocher's tune to fit “As With Gladness” for the 1861 edition of Hymns Ancient and Modern, which he was music editor for. Even though Dix did not like the choice of this tune, it goes so well with the text that it now bears his name.

One hymn commentator suggests “Sing in three long lines rather than six short ones in order to reflect the longer phrases of the text” (Emily R. Brink and Bert Polman, eds., Psalter Hymnal Handbook, 514). Sing at a brisk tempo, with simple, consistent accompaniment for the first three stanzas, to show the uniformity of the message. Try adding additional instruments, such as a trumpet, for the final stanza.

This hymn fits best during Epiphany, but can also be sung at Christmas.

“As With Gladness” could be paired with another contemplative Christmas hymn, such as “Once in Royal David's City,” or another hymn about the story of the Magi, such as “We Three Kings of Orient are.” The handbell medley of “We Three Kings,” “As With Gladness,” and “Break Forth, O Beauteous Heavenly Light” titled “Behold the Glorious, Heavenly Light” is a joyous celebration of the light Christ brings that draws people to Him. It would do well as a prelude for a service on Epiphany Sunday. 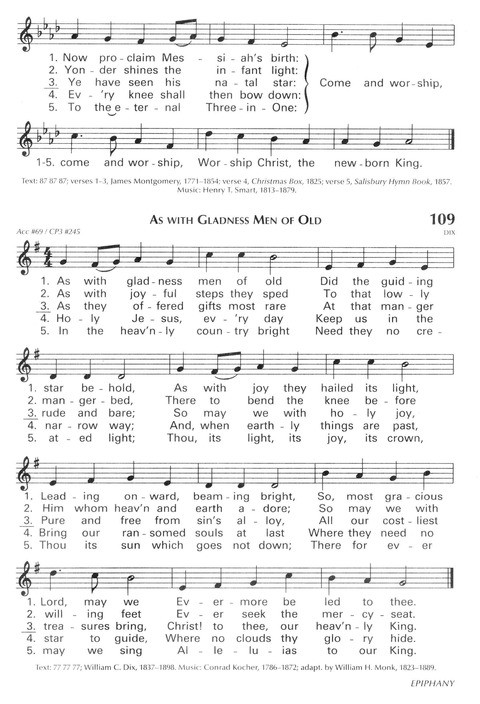 Hymns for a Pilgrim People #144

Hymns of the Christian Life #67

The Hymnal for Worship and Celebration #163

The Song Book of the Salvation Army #76