What Child Is This

What child is this, who, laid to rest

1 What Child is this, who, laid to rest,
On Mary's lap is sleeping?
Whom angels greet with anthems sweet,
While shepherds watch are keeping?


Chorus:
This, this is Christ, the King,
Whom shepherds guard and angels sing:
Haste, haste to bring Him laud,
The Babe, the Son of Mary!


2 Why lies He in such mean estate,
Where ox and ass are feeding?
Good Christian, fear: for sinners here
The silent Word is pleading.[Chorus]


3 So bring Him incense, gold, and myrrh,
Come, peasant, king to own Him.
The King of kings salvation brings;
Let loving hearts enthrone Him.[Chorus]

Most British hymn writers in the nineteenth century were clergymen, but William C. Dix (b. Bristol, England, 1837; d. Cheddar, Somerset, England, 1898) was a notable exception. Trained in the business world, he became the manager of a marine insurance company in Glasgow, Scotland. Dix published various volumes of his hymns, such as Hymns of Love and Joy (1861) and Altar Songs: Verses on the Holy Eucharist (1867). A number of his texts were first published in Hymns Ancient and Modern (1861). Bert Polman… Go to person page >
^ top

All tunes published with 'What Child Is This'^ top

Have you ever studied the words of Isaiah 9:6-7 (they begin, "For to us a child is born") and realized just how strange they are? At first glance, the grand titles and expectations seem absurd to place on a child. It’s a strange picture - a small child, hunched over like Atlas, a parliament building set on his shoulders, wearing a crown, perched on a throne, with a very troubled look on his face, as if to say, “What in the world am I doing here?” And yet, this is exactly what these verses tell us to be true. Of course, there was no actual building, no real throne, and no crown but one of thorns. But the thought is still astounding – this child, this baby wrapped in swaddling clothes, would be the fulfillment of these promises. He would be, and is, the Wonderful Counselor, Mighty God, Everlasting Father, Prince of Peace. It is this astonishing prophecy that we keep in mind when we ask the question, “What child is this?”

This text, by William C. Dix, is his own modification of a poem he had written entitled “The Manger Throne.” There are two differences in the text between hymnals. Some hymnals, rather than divide into three verses and a chorus, make the tune of the chorus an extension of each verse, using the traditional words for the chorus as an extension of verse one, and adding new words to verses two and three. Other hymnals that keep the traditional structure alter the third line of the chorus to repeat, “This, this is Christ the King,” rather than “Haste, haste to bring Him laud.”

Perhaps the most famous aspect of this hymn is its tune. GREENSLEEVES is an iconic medieval tune, named for the character about which the old folk song was written, Lady Green Sleeves. It is the only tune now used for Dix’s text. One important difference in the tune among various versions is found in the second measure. The rising notes on the word “this” can either be sung as a half step from B to C, or a whole step, from C to C#.

This gentle hymn can be sung a cappella, or with very light accompaniment. The harmonies are beautiful, so be sure to draw those out. You could start with a children’s choir on the first verse, and add the congregation on the last two. Or start a cappella, and add light guitar or piano. Don’t be afraid to sing this hymn at a fairly quick tempo.

This is a well-known Christmas carol, and is often sung during a carol sing or Christmas Eve service. It is often sung as a solo, and could be sung during the offering, emphasizing the words, “so bring Him incense, gold and myrrh.” Larry Shackley has a beautiful arrangement of this hymn combining it with “Coventry Carol” in his collection of carols for the piano, Christmas Reflections. On the flip side, this hymn could also be sung during the season of Lent. There is an article in Reformed Worship called “Students Celebrate Holy Week: Resources from Two High School Chapels” with an excellent dramatic reading interspersed with the singing of this hymn for a Good Friday service. 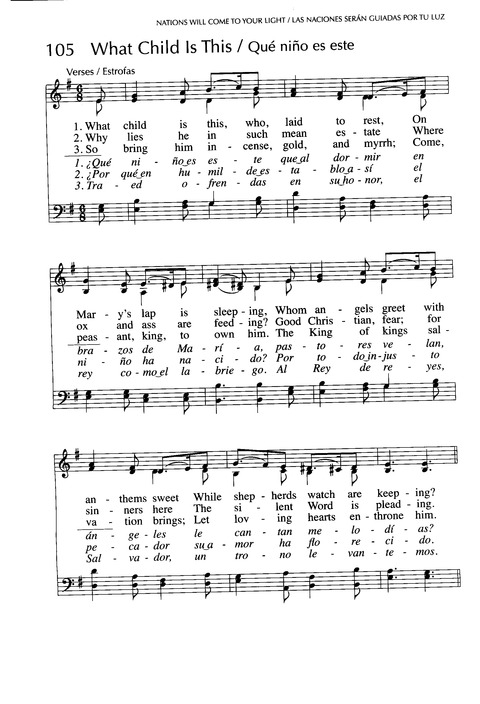 A New Hymnal for Colleges and Schools #232

Display Title: This, this is Christ the King First Line: What child is this, who, laid to rest Tune Title: Greensleeves Date: 1992
A New Hymnal for Colleges and Schools #232

Display Title: What child is this First Line: What child is this, who, laid to rest Tune Title: GREENSLEEVES Author: William Chatterton Dix, 1837-98 Meter: 87 87 with refrain Date: 1999 Subject: Seasons of the Christian Year | Advent and Christmas
Complete Mission Praise #749

Hymns for a Pilgrim People #138

Display Title: What Child Is This? First Line: What Child is this who, laid to rest Tune Title: GREENSLEEVES Author: William C. Dix Date: 1979 Subject: Christ | his birth
Praise! Our Songs and Hymns #180

Display Title: What Child Is This? First Line: What Child is this, who, laid to rest Tune Title: GREENSLEEVES Author: William C. Dix Meter: 8.7.8.7. with Refrain Date: 1997 Subject: Christ | Birth
The Celebration Hymnal #281

Display Title: What Child Is This? First Line: What Child is this, who, laid to rest Tune Title: GREENSLEEVES Date: 2006
The Christian Life Hymnal #110

Display Title: What Child Is This? First Line: What child is this who, laid to rest Tune Title: GREENSLEEVES Author: William Chatterton Dix Source: The Manger Throne, 1865
The Cyber Hymnal #7273

The Hymnal for Worship and Celebration #137

Display Title: What Child Is This? First Line: What Child is this, who, laid to rest Tune Title: GREENSLEEVES Author: William C. Dix Meter: 8.7.8.7. with Refrain Date: 1986 Subject: Christ | Lordship; Jesus Our Savior : His Birth |
The Hymnal for Worship and Celebration #137