Stanza 1 is a paraphrase of Rist's original ninth stanza; the rather free paraphrase is a composite effort of John Troutbeck and others. Borrowing more from John 1, Norman E. Johnson (PHH 322) prepared a second stanza, which was first published in the 1973 Covenant Hymnal. The composite text then views the Christmas story both through the perspective of Luke 2 (st. 1) and John 1 (st. 2).

Rist was a man of many gifts and accomplishments. He studied at the universities of Rinteln and Rostock, published widely on contemporary events, and became poet laureate for Emperor Ferdinand III in 1644. He served as both pastor and physician in Wedel (1635-1667) but lost his musical and scientific instruments during the Thirty Years' War. Although a successful pastor who was often honored for his work, Rist refused positions of greater prestige and income. In collections published from 1641 to 1656 he produced some 680 hymn texts for use in private devotions. Eventually German churches used a number of his hymns in public worship.

John Troutbeck (b. Blencowe, Cumberland, England, 1832; d. Westminster, London, England, 1899) was educated at University College, Oxford, England, and ordained a priest in the Church of England in 1856. He was precentor at Manchester cathedral from 1865 to 1869 and then held a similar position at Westminster Abbey. Troutbeck served as chaplain to Queen Victoria and was secretary for the New Testament Revision Committee (1870-1881). His greatest claim to fame arises from his translation into English of German, French, and Italian operas, songs, and oratorios (including cantatas and chorales set by J. S. Bach) for the British music publisher Novello. An editor of The Manchester Psalter (1867), Westminster Abbey Hymn Book (1883), and several chant books; he was also the author of Church Choir Training (1879).

Johann Schop (PHH 122) composed ERMUNTRE DICH in triple meter for the Rist text with which it was published in Himmlische Lieder (1641). Johann Crüger (PHH 42) adapted the tune for his Praxis Pietatis Melica (1648). The isorhythmic (all equal rhythms) setting in the Psalter Hymnal is the Johann S.… 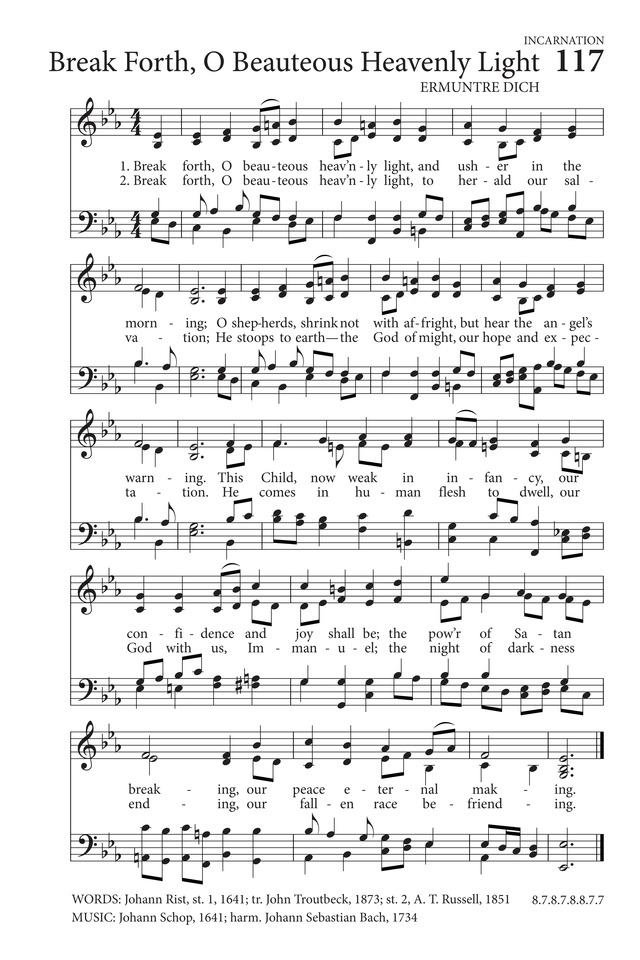 Hymns for a Pilgrim People #99

The Hymnal for Worship and Celebration #129