Come, Risen Lord, and Deign to be Our Guest 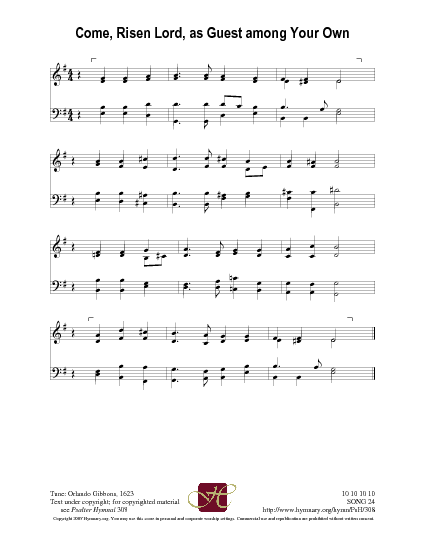 Come, risen Lord, and deign to be our guest

1 Come, risen Lord, and deign to be our guest;
no, let us be your guests and with you dine;
at your own table now be manifest
in your own sacrament of bread and wine.


2 We meet as in the upper room they met;
now at the table, blessing, yet you stand:
'This is my body': this you give us yet;
faith still receives the cup as from your hand.


3 One body we, one body who partake,
one church united in communion blessed;
one name we bear, one bread of life we break,
with all your saints on earth and saints at rest.


4 One with each other, Lord, and one in you,
who are one Saviour and one living head;
open our eyes to see with vision true;
be known to us in breaking of the bread.

George Wallace Briggs is a Canon of Worcester Cathedral and one of the most distinguished British hymn writers and hymnologists of today. Six of his hymns appear in the Episcopal Hymnal of 1940 (American). Another hymn on the Bible entitled "Word of the living God" was written for the 25th Anniversary of the British Bible Reading Fellowship and was sung in Westminster Abbey on June 5, 1947. It has been widely used since that time. Canon Briggs is a leading member of the Hymn Society of Great Britain and Ireland. He is also the composer of several hymn times, six of which have appeared in British hymnals. In addition to his work as a clergy man of the Church of England and an hymnologist, he has interest himself actively in the field of reli… Go to person page >
^ top

This fine text celebrates the presence of Christ in the Lord's Supper. Stanzas 1 and 4 allude to the part of the Emmaus story (Luke 24:28-35) in which the two disciples invite Jesus to be their guest, but then Jesus becomes their host. Stanza 2 focuses on our partaking of the sacrament and stanzas 3 and 4 on the oneness we share with all believers in this world and in heaven.

Originally written as "Come, risen Lord, and deign to be our guest," the text by George W. Briggs (b. Kirkby,Nottingham County, England, 1875; d. Hindhead, Surrey, England, 1959) was first published in the original edition of the British hymnbook Songs of Praise (1925). Briggs, however, regretted a change suggested by Percy Dearmer (PHH 595), editor of that hymnal–from "thine own sacrament" to "this our sacrament" in stanza I-so he later published the text in its original form in his own Songs of Faith (1945). The Psalter Hymnal text is slightly altered from the revision published in Hymns for Today's Church (1982).

Educated at Emmanuel College, Cambridge, Briggs was a well-known twentieth-century hymn writer. A clergyman in the Church of England, he served a number of parishes and was a chaplain in the Royal Navy. He was especially interested in promoting meaningful worship in the British schools and consequently wrote Prayers and Hymns for Use in Schools (1927) and Prayers and Hymns for Junior Schools (1933). Briggs was a founding member of the Hymn Society of Great Britain and Ireland.

Liturgical Use:
Lord's Supper services-fits well as a congregational song either before the sacrament or during distribution of the bread and wine; also makes a fine choir anthem, preferably unaccompanied, during the sacrament.

All tunes published with 'Come, Risen Lord, and Deign to be Our Guest'^ top

Great Songs of the Church (Revised) #378