1 Father, we thank Thee who hast planted
Thy holy Name within our hearts.
Knowledge and faith and life immortal
Jesus Thy Son to us imparts.
Thou, Lord, didst make all for Thy pleasure,
didst give man food for all his days,
giving in Christ the Bread eternal;
Thine is the pow'r, be Thine the praise.


2 Watch o'er Thy church, O Lord, in mercy,
save it from evil, guard it still.
Perfect it in Thy love, unite it,
cleansed and conformed unto Thy will.
As grain, once scattered on the hillsides,
was in this broken bread made one,
so from all lands Thy church be gathered
into Thy kingdom by Thy Son.

Francis Bland Tucker (born Norfolk, Virginia, January 6, 1895). The son of a bishop and brother of a Presiding bishop of the Episcopal Church, he was educated at the University of Virginia, B.A., 1914, and at Virginia Theological Seminary, B.D., 1920; D.D., 1944. He was ordained deacon in 1918, priest in 1920, after having served as a private in Evacuation Hospital No.15 of the American Expeditionary Forces in France during World War I. His first charge was as a rector of Grammer Parish, Brunswick County, in southern Virginia. From 1925 to 1945, he was rector of historic St. John's Church, Georgetown, Washington, D.C. Then until retirement in 1967 he was rector of John Wesley's parish in Georgia, old Christ Church, Savannah. In "Reflecti… Go to person page >
^ top

This hymn text is rooted in the early Christian church, all the way back to the Greek-language Didache (the Teaching of the Twelve Apostles), a Christian manual from the Church of Antioch, Syria, which some scholars date as early as A.D. 110. To produce this hymn text, F. Bland Tucker (PHH 247) translated selected prayers from chapters 9 and 10 of the Didache.

Stanzas 1 and 2a are from a post-communion prayer, and stanza 2b is from a prayer intended during distribution of the bread. The whole is essentially a hymn of thanksgiving and praise (st. 1) concluded with a petition for the unity of the church (st. 2), which reminds us of Christ's prayer that all believers "may be one" (John 17:21). That unity should be obvious when Christians gather around the Lord's table, but it should also extend within and between Christian denominations.

Tucker's 1939 translation was first published in the American Protestant Episcopal Hymnal 1940. The original first line read, "Father, we thank thee who hast planted." The modernized text in the Psalter Hymnal is the same as that published in the Australian hymnal With One Voice (1977).

Liturgical Use:
Lord's Supper–as a post-communion hymn of thanksgiving; perhaps combined with the text of 310 (as the first stanza) whenever a longer hymn is needed, especially as a choral motet during communion.

GENEVAN 98/118 is the one tune in the Psalter Hymnal used for two psalms. It was first published in the 1551 Genevan Psalter as a setting for Psalm 118; in the 1562 edition it was also set to Psalm 98 (hence both numbers in the tune name). The tune is also often named RENDEZ A DIEV, the French incip…

LES COMMANDEMENS (French for "the commandments"), a rich and graceful tune in the Hypo-Ionian mode (major), was used in the Genevan Psalter (1547) for the Decalogue and for Psalm 140, and later in British psalters and in the Lutheran tradition. The first setting in the Psalter Hymnal derives from Cl…

All tunes published with 'Father, We Thank Thee, Who Hast Planted'^ top 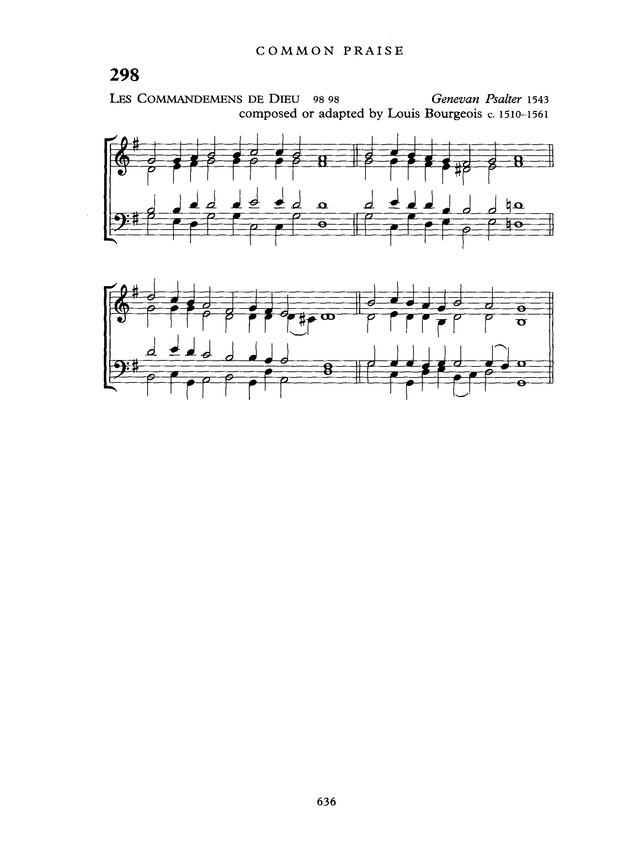