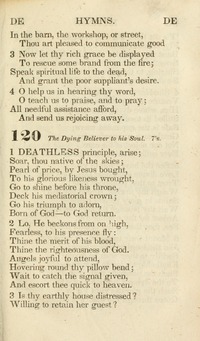 1 Deathless principle, arise;
Soar, thou native of the skies;
Pearl of price, by Jesus bought,
To his glorious likeness wrought,
Go to shine before his throne,
Deck his mediatorial crown;
Go, his triumphs to adorn,
Born of God--to God return.


2 Burst thy shackles, drop thy clay,
Sweetly breathe thyself away;
Singing, to thy crown remove,
Swift of wing, and fired with love.
Shudder not to pass the stream;
Venture all thy care on him;
Him, whose dying love and power
Stilled its tossing, hushed its roar.


3 Saints in glory perfect made,
Wait thy passage through the shade;
Ardent for thy coming o'er,
See, they throng the blissful shore;
Mount, their transports to improve,
Join the longing choir above;
Swiftly to their wish be given,
Kindle higher joy in heaven.

Source: The Voice of Praise: a collection of hymns for the use of the Methodist Church #936

“A Memoir of some Principal Circumstances in the Life and Death of the Rev. Augustus Montague Toplady, late Vicar of Broad Hembury, Devon. To which is added, written by himself, the Dying Believer's Address to his soul, and his own last Will and Testament. London, Pr. for J. Matthews, 1778, pr. 6d."

"The following soliloquy, written some years ago by Mr. Toplady upon the death of a valued friend, has been thought so apposite to himself in his own dying hour that it is presented without any further apology."

After a sentence referring to the Emperor Hadrian, and his poem, "Animula, vagula, blandula," &c, and a note embodying Pope's translation of Hadrian's "Animula”, &c, and of "Musculus Versus," the poem, "Deathless principle, arise" follows, in stanzas of irregular length. It was subsequently shaped into 6 stanzas of 8 lines, and in this form is given in D. Sedgwick's reprint of Toplady's Hymns and Sacred Poems, 1860, p. 165. In its full form it is found in many collections, both old and new, but usually for private use. In some American collections a cento is given beginning: “Deathless spirit, now arise," as in Dr. Hatfield's Church Hymn Book, N. Y., 1872, whilst in others, as Longfellow & Johnson's Unitarian Hymns of the Spirit, Boston, 1864, there is a second cento, "Burst thy shackles! drop thy clay! "

All tunes published with 'The Dying Believer'^ top 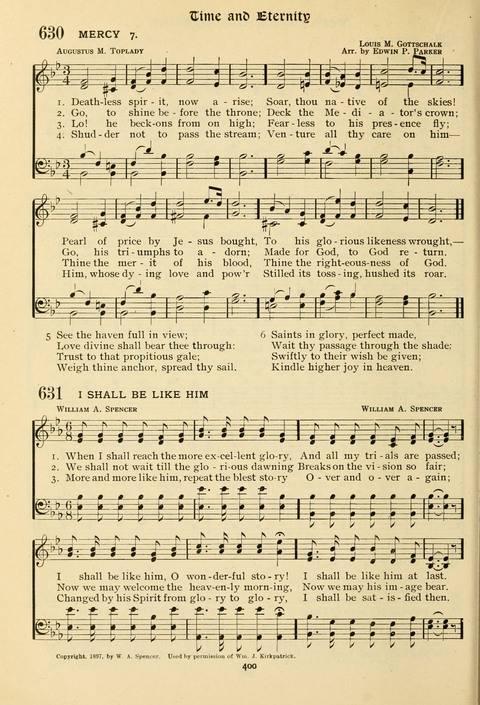 A Collection of Choral Hymns for the ... Hanson Place Methodist Episcopal Congregation #d34

A Collection of Hymns for Public, Social and Domestic Worship #d164

A Collection of Hymns for Public, Social and Domestic Worship #d165

A Collection of Hymns for Public, Social, and Domestic Worship #d164

A Collection of Hymns for Public, Social, and Domestic Worship #1045

A Collection of Hymns from Various Authors. New ed. #d76

A Selection of Hymns, adapted to the devotions of the closet, the family, and the social circle; and containing subjects appropriate to the monthly concerns of prayer for the success... #120

Congregational Hymn and Tune Book; containing the Psalms and Hymns of the General Association of Connecticut, adapted to Suitable Tunes #1018

Hymnal of the Methodist Episcopal Church #1004

Hymnal of the Methodist Episcopal Church #1004

Hymnal of the Reformed Episcopal Church, adopted in General Council, Chicago, May 1879 #d55

Hymns and Songs of Praise for Public and Social Worship #1317

Hymns for Church and Home #404

Hymns for the Sick-Room #88

Hymns for the Use of the Methodist Episcopal Church. Rev. ed. #674

Hymns of the Church Militant #227

Hymns of the Protestant Episcopal Church of the United States, as authorized by the General Convention #458

Ocean Melodies, and Seamen's Companion #76a

Plymouth Collection of Hymns and Tunes; for the use of Christian Congregations #1254

Prayers and Hymns for the Church and the Home #d110

Psalms and Hymns, for Christian Use and Worship #H474

Songs in the Night; or Hymns for the Sick and Suffering. 2nd ed. #d29

The Clifton Chapel Collection of "Psalms, Hymns, and Spiritual Songs" #1428

The Evangelical Hymnal with Tunes #453

The Guiding Star for Sunday Schools #128

The Halifax Selection of Hymns #d94

The Hymn Book of the Free Methodist Church #741

The Tribute of praise and Methodist Protestant Hymn Book. #470

The Wesleyan Harp, a Collection of Hymns and Tunes Suitable for Social Worship. 1st ed. #d26