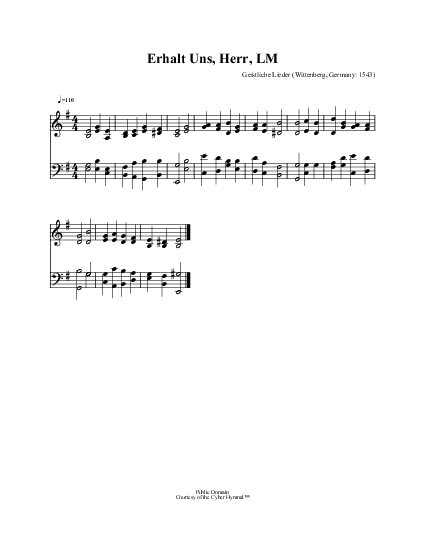 Suggested tune: ERHALT UNS, HERR
Erhalt uns, Herr, bei deinem Wort. M. Luther. [Peace and Orthodoxy.] This hymn was probably written 1541. In that year a service of prayer against the Turks was held at Wittenberg, for which Luther prepared a special office, in which most of the music was arranged for the boys of the choir. It was printed in broadsheet form at Wittenberg, 1542; appeared in Low German, in the Magdeburg Gesang-Buch. In Klug it was entitled "A hymn for the children to sing against the two arch-enemies of Christ, and His Holy Church, the Pope and the Turks." Thence in Wackernagel, iii. p. 26, in 3 stanzas of 4 lines, and Schircks's edition of Luther's Geistliche Lieder, 1854, p. 44. Additional stanzas from various sources have often been appended to this hymn, the most popular being those by Justus Jonas, probably written in 1545, against the Council of Trent. These are:—iv. "Ihr Anschläg, Herr, zu nichte mach"; v."So wenien wirerkennen doch," and appear, added to Luther's three, at the end of the Radtschlag des allerheyligsten Vaters Babsts Pauli des Dritten, mit dem Colligio Cardinalium gehalten, wie das angesatzte Concilium zu Trient fürzunehmen sey. Anno m.d.xlv. (Wackernagel's Bibliographie, 1855, p. 204.) This text, in 5 stanzas is No. 723 in Burg's Breslau Gesang-Buch, 1746.

The hymn soon came into universal use, at morning and evening devotions, before sermon, &c. Lauxmann, in Koch, viii. 133-134, gives various instances of the resentment of the Romanists, especially against stanza i., line 2, "Und steur des Papst und Türken Mord," which in many recent hymn-books appears as "Und steure deiner Feinde Mord." It came into use in England through Wisdome's version (see below), of which Warton in his History of English Poetry, sect. xlv. (evidently not knowing that Wisdome was merely the translator) thus speaks:—He is chiefly memorable for his metrical prayer, intended to be sung in the church, against the Pope and the Turk, of whom he seems to have conceived the most alarming apprehensions. It is probable that he thought Popery and Mahometanism were equally dan¬gerous to Christianity, at least the most powerful and sole enemies of our religion . . . Happily we have hitherto survived these two formidable evils!" The Turk, however, had come nearer to Wittenberg than to London, having under the rule of Suleiman the Lawgiver (1520-1566) conquered the greater part of Hungary, and even besieged Vienna. Moreover we find that in England in 1565 a form of prayer was issued to excite all godly people to pray "for the delivery of these Christians that are now invaded by the Turk." One passage from Luther's Table Talk will sufficiently show his sentiments: Antichrist is the Pope and the Turk together; a beast full of life must have a body and soul; the spirit or soul of Antichrist is the Pope, his flesh or body the Turk. The latter wastes and assails and persecutes God's Church corporally; the former spiritually and corporally too, with hanging, burning, murdering, &c. But, as in the apostles' time, the Church had the victory over the Jews and Romans, so now will she keep the field firm and solid against the hypocrisy and idolatry of the Pope, and the tyranny and devastation of the Turk and her other enemies." Bohn's ed., p. 193. 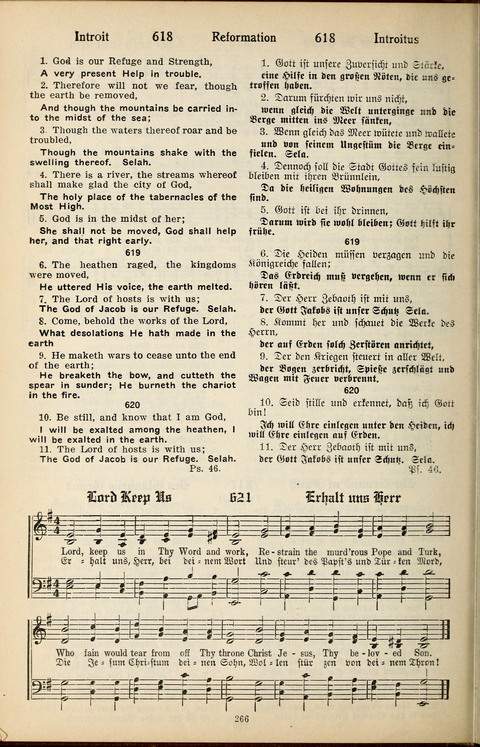