For the beauty of the earth

1 For the beauty of the earth,
for the glory of the skies,
for the love which from our birth
over and around us lies.


Refrain:
Christ, our Lord, to you we raise
this, our hymn of grateful praise.


2 For the wonder of each hour
of the day and of the night,
hill and vale and tree and flower,
sun and moon and stars of light, [Refrain ]


3 For the joy of human love,
brother, sister, parent, child,
friends on earth, and friends above,
for all gentle thoughts and mild, [Refrain]


4 For yourself, best gift divine,
to the world so freely given,
agent of God's grand design:
peace on earth and joy in heaven. [Refrain]

In the spring of 1863, Folliott S. Pierpoint (b. Bath, Somerset, England, 1835; d. Newport, Monmouthshire, England, 1917) sat on a hilltop outside his native city of Bath, England, admiring the country view and the winding Avon River. Inspired by the view to think about God's gifts in creation and in the church, Pierpont wrote this text. Pierpont was educated at Queen's College, Cambridge, England, and periodically taught classics at Somersetshire College. But because he had received an inheritance, he did not need a regular teaching position and could afford the leisure of personal study and writing. His three volumes of poetry were collected in 1878; he contributed hymns to The Hymnal Noted (1852) and Lyra Eucharistica (1864). "For the Be… Go to person page >
^ top

Folliett Sandford Pierpoint originally wrote this hymn for use during the Communion of the High Anglican Church. The original refrain "Christ, our God, to thee we raise; This our sacrifice of praise" was meant to mirror the portrayal of Christ's ultimate sacrifice -- just as the host would be lifted during the communion as a token of God's gift to us, a "sacrifice of praise" would be lifted in return. Later editions of the text emphasize the thanksgiving aspect of the verses. --Greg Scheer, 1995

An early form of the tune DIX was composed by Conrad Kocher (b. Ditzingen, Wurttemberg, Germany, 1786; d. Stuttgart, Germany, 1872). Trained as a teacher, Kocher moved to St. Petersburg, Russia, to work as a tutor at the age of seventeen. But his love for the music of Haydn and Mozart impelled him t…

All tunes published with 'For the Beauty of the Earth'^ top

In 1863, Folliott S. Pierpoint was wandering through the English countryside around the winding Avon River. As he looked on the peaceful beauty surrounding him, he was inspired to reflect on God’s gifts to his people in creation and in the church. Above all, Pierpoint thought of the sacrifice of Christ, in the greatest of sacrifices, that of his life in return for ours. He thus originally wrote the text of “For the Beauty of the Earth” as a hymn for the Lord’s Supper. The original chorus read, “Christ, our God, to thee we raise this, our sacrifice of praise.” The hymn was meant not only as a song of thanksgiving, but as the only thing we could give Christ in return for his mercy and love: a hymn of praise laid upon the altar as a sacrifice. Editors have since altered the refrain so it has become a more generic hymn of thanksgiving, but as it stands, it takes on a deeper meaning when understood as something we not only sing, but offer up to God.

Most hymnals today include four or five verses of the original eight. The Psalter Hymnal leaves out this verse, which is included in many other hymnals:

For the church that evermore
Lifteth holy hands above,
Offering up on every shore
Her pure sacrifice of love.

I think this is a beautiful verse simply because it acknowledges that the church is a gift – we did not come together on our own accord or through our own initiatives, but rather God has given us communion with each other through the body of Christ. This is truly something to be celebrated.

As Albert Bailey writes in his book, The Gospel in Hymns, in each verse, “the objects that arouse our gratitude are mentioned without much logical connection: the poet just thinks of as many sources of joy as possible and puts them down as they come to mind.” Rough commentary, but later he writes, “As we sing this hymn…we enjoy the memories and emotions aroused by the poet’s pictures. Perhaps this is praise enough to please God” (Bailey, 368). The simplicity of this text helps us lift our voices honestly and, of course, gratefully.

The tune DIX was written by Conrad Kocher and adapted by William Henry Monk. It is a simple melody much loved by congregations, and most hymnals have it in the key of G. I find that there are two predominant ways to do this hymn. If you’re using an organ or heavier sounding accompaniment, it’s best to keep the tune moving at a quicker pace so it doesn’t get weighed down and dragged. If you’re using a guitar or light piano, then you can take your time a bit more, and enjoy the simple, lilting feel of the melody.

Here are a few different versions for arranging inspiration:

Some recommended accompaniment resources are:

The Book of Common Praise: being the hymn book of The Church of England in Canada (revised 1938) #598b 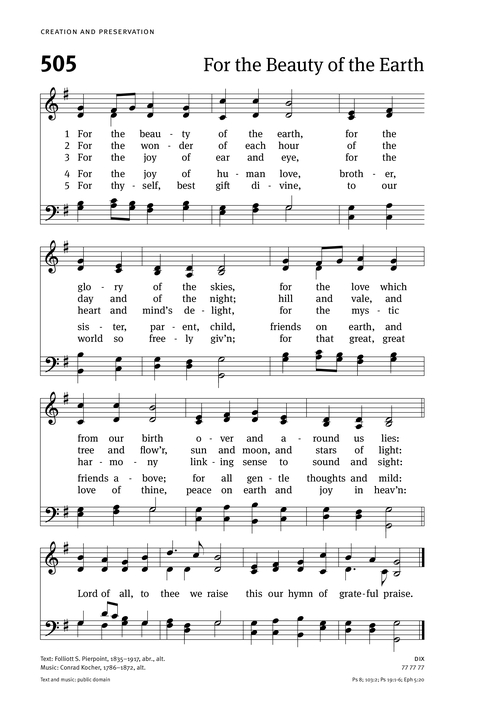 A New Hymnal for Colleges and Schools #67

Ancient and Modern #537a

Ancient and Modern #537b

Great Songs of the Church (Revised) #94

Hymns for a Pilgrim People #259

Hymns from the Four Winds #31

Display Title: For the Beauty of the Earth First Line: For the beauty of the earth Tune Title: MO-LI-HUA Author: Folliott S. Pierpoint Scripture: Psalm 33:5; Psalm 119:64 Date: 1983 Subject: God | Creation of God; Responses to God | Praise and Worship; Responses to God | Thanksgivings; The Christian Life | Love and Grace; The Christian Life | Peace and Joy; The Church | Worship and Praise; The Holy Spirit and The Church | The Church Source: Chinese
Hymns from the Four Winds #31

Hymns of Glory, Songs of Praise #181a

Hymns of Glory, Songs of Praise #181b

Hymns of the Christian Life #26

Hymns to the Living God #46

In Every Corner Sing #9

Praise! Our Songs and Hymns #26

Rejoice in the Lord #5

The Hymnal for Worship and Celebration #560

The Irish Presbyterian Hymbook #20a

The Irish Presbyterian Hymbook #20b

The New English Hymnal #285a

The New English Hymnal #285b

Include 463 pre-1979 instances
All instances^ top
Suggestions or corrections? Contact us