Glorious Things of Thee Are Spoken

Glorious things of thee are spoken

1 Glorious things of thee are spoken,
Zion, city of our God;
he whose word cannot be broken
formed thee for his own abode;
on the Rock of Ages founded,
what can shake thy sure repose?
With salvation's walls surrounded,
thou may'st smile at all thy foes.


2 See the streams of living waters,
springing from eternal love,
well supply thy sons and daughters,
and all fear of want remove;
who can faint while such a river
ever flows their thirst t'assuage?
Grace, which like the Lord, the giver,
never fails from age to age.


3 Round each habitation hov'ring,
see the cloud and fire appear
for a glory and a cov'ring,
showing that the Lord is near;
thus deriving from their banner
light by night and shade by day,
safe they feed upon the manna
which he gives them when they pray.


4 Savior, if of Zion's city
I, thro' grace, a member am,
let the world deride or pity,
I will glory in thy name;
fading is the worldling's pleasure,
all his boasted pomp and show;
solid joys and lasting treasure
none but Zion's children know.

Glorious things of Thee are spoken. J. Newton. [Church of Christ.] First published in the Olney Hymns, 1779, Bk. i., No. 60, in 5 stanzas of 8 lines, and entitled, "Zion, or the City of God," Is. xxxiii. 20, 21. It has attained to great popularity in all English-speaking countries, and ranks with the first hymns in the language. It is used, however, in various forms as follows:—
1. Original text in Snepp's Songs of Grace & Glory People's Hymnal.
2. A cento composed of stanzas i., ii. and v. This appeared in Cotterill's Selection, 1819, from whence it has passed into a great number of collections. It is by far the most popular arrangement of the hymn in use, and may be found in fifty or more hymnals, as in Hymnal Companion, No. 234, and sometimes with Cotterill’s slight alterations, as in the Rev. F. Pott's Hymns, &c, 1861-67.
3. A cento composed of stanzas i., iii. and v., given in Society for Promoting Christian Knowledge Hymns, 1852, but not popular.
4. A cento, stanzas i., ii. and doxology in four lines, not by Newton, in the Cooke and Denton Hymnal, 1853.
5. A cento, in 4 stanzas of 4 lines, beginning, "Glorious things of old were spoken," is given in Isaac G. Smith's Hymn Book, 1855-57. It is thus composed: stanza i., Newton altered; ii., I. G. Smith; iii., Newton; iv., dox. from Cooke & Denton. This is the least successful of any arrangement.
6. The whole hymn revised by J. Keble for the Salisbury Hymn Book, 1857, and included therein, as No. 130, with the four-line doxology from Denton. This, with slight returns to the original in two places (stanzas i., v.), and the omission of the doxology, was repeated in the Sarum Hymnal (broken into two parts, pt. ii. beginning "Blessed city, holy nation), 1868; and a cento therefrom again altered, in 6 stanzas of 4 lines in T. Darling's Hymns, &c, edition 1887. Another cento, also with alterations, is given in the Hymnary, from which it passed into the New Mitre Hymnal, 1875.
7. Cento of stanzas i., ii., iv., v., unaltered as in the Book of Praise Hymnal, Thring's Collection, and others.
8. In the Society for Promoting Christian Knowledge Church Hymns, stanzas i.-iv. with slight alterations in stanzas i., ii., and iii.
In the American collections the same diversity of use prevails as in Great Britain. Sometimes the hymn is broken into two parts, with pt. ii. beginning, "Blest inhabitants of Zion." In addition other arrangements of minor importance are given in collections of less importance; but in most cases the original text is maintained. Stanzas i., ii., v., have been rendered into Latin by the Rev. R. Bingham, and included in his Hymnologia Christiana Latina, 1871, "Dicta do te sunt miranda."

All tunes published with 'Glorious Things of Thee Are Spoken'^ top

The opening line of this hymn quotes Psalm 87:3 “Glorious things of you are spoken, O city of God” (ESV). The theme of these stanzas is the universal church, and its story. The text begins with a vision of the new city of God (Hebrews 12:22) in the first two stanzas, and then looks back to the early journey of the Israelites, with references in the third stanza to cloud, fire, and manna (Exodus 13:21, 16:31). We are reminded through this of the long history God has with His people, and of the wonderful future awaiting those who are, through grace, members of God's family.

The title of Book I of the Olney Hymns, published in 1779 by John Newton and William Cowper, is “On Select Texts of Scripture,” containing hymns written on specific Scripture passages, arranged in biblical order. “Glorious Things of Thee Are Spoken,” written by Newton, is number 60 in this book. It is written on Isaiah 33:20-21, but there are plenty of clear references to other Scriptures, which Newton cited in footnotes, such as Psalm 87 (the first two lines of the hymn are nearly a direct quote of Ps. 87:3) and Isaiah 4:5-6 (which is closely paraphrased in the third stanza). This hymn has been called one of Newton's finest hymns, and it is certainly one of his most popular, along with “Amazing Grace” and “How Sweet the Name of Jesus Sounds.”

Three or four stanzas are sung, always including the first and second. Of the remaining three, the original fourth (beginning “Blest inhabitants of Zion”) is usually omitted, and then either the third (“Round each habitation”) or the fifth (“Savior, if of Zion's city”).

The most common tune for this text is Franz Joseph Haydn's famous melody AUSTRIA (which is also called AUSTRIAN HYMN, GERMAN HYMN, HAYDN, or VIENNA). This association was a very strong one until after World War II. While it is still very common to sing Newton's text to Haydn's music, some hymnals have used other tunes, such as RUSTINGTON or ABBOT'S LEIGH.

AUSTRIA has had nationalist associations from its inception. Haydn was commissioned to write a national anthem for Austria after visiting England and bringing back a report of the great impact “God Save the King” had on the British public. His tune was the national anthem for Austria from its composition and first performance for the emperor's birthday in 1797 until the Austrian Republic was established in 1918 following World War I. It was used as a hymn tune in English-speaking countries from the first decade of the nineteenth century. The German national song “Deutschland über alles” (written in the mid-nineteenth century by Hoffmann von Fallersleben), paired to this tune, was used by the Nazis in World War II, and added some very painful associations to this music. The question of whether to banish this popular tune completely or retain it because of it pre-1940s history is well-answered by Paul Westermeyer: “Though it is … a tune that needs to be in hymnals for future generations, there are many circumstances where, because of its associations, this tune still should not and cannot be sung” (Hymnal Companion to Evangelical Lutheran Worship, p. 700).

One tune with an interesting and related story is ABBOT'S LEIGH, which was written for Newton's text specifically as an alternate to AUSTRIA. During World War II, Cyril Taylor was in the village of Abbot's Leigh, near Bristol, England, working for the religious broadcasting department of the BBC. He wrote this tune on a Sunday morning in the spring of 1941, and it was introduced and popularized in Britain by its use in BBC radio broadcasts. It was published in Hymns Ancient and Modern in 1950.

RUSTINGTON was written by C. Hubert H. Parry and named after the English village in which he spent the last years of his life. It first appeared in the Westminster Abbey Hymn Book of 1897 with Benjamin Webb's hymn “Praise the rock of our salvation.”

This hymn is suitable for any service on the theme of the Church, such as a church anniversary or an ordination service, among others. For an alternate accompaniment for congregational singing, try the settings found in “Hymn Harmonizations by Hayes” (AUSTRIAN HYMN), “Festival Hymns for Organ, Brass, and Timpani—Set 5” (RUSTINGTON), or a festive version of “ABBOT'S LEIGH.” For a prelude or postlude based on the hymn's most common tune, AUSTRIAN HYMN, the collection “For Love of Country” contains a piano setting, and an easy organ fanfare can be found in “Nine Hymn Preludes.” 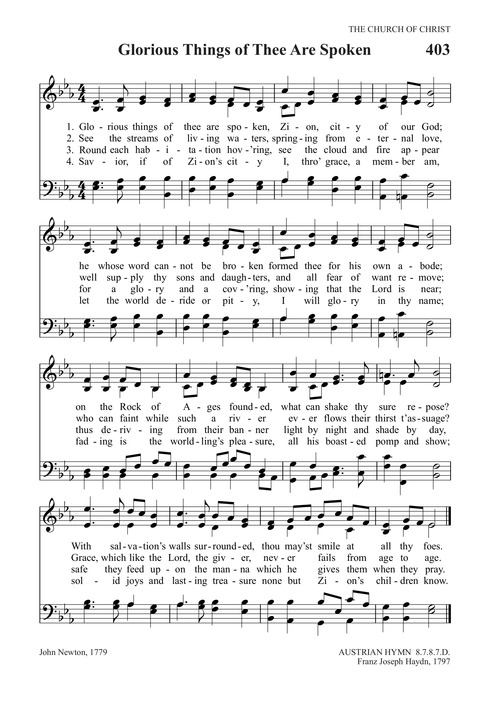 Ancient and Modern #641a

Ancient and Modern #641b

Hymns for a Pilgrim People #485

Psalms for All Seasons #87D

Psalms for All Seasons #87E

The Hymnal for Worship and Celebration #278

The Song Book of the Salvation Army #157