How Blest Is He Whose Trespass

How blest is he whose trespass has freely been forgiven

1 How blest are they whose trespass
Has freely been forgiv'n,
Whose sins are wholly covered
Before the sight of heav'n.
Blest they to whom the LORD God
Does not impute their sin,
Who have a guileless spirit,
Whose heart is true within.


2 While I kept guilty silence,
My strength was spent with grief:
Your hand was heavy on me;
My soul found no relief.
But when I owned my trespass
And did not hide my sin,
Then you forgave my guilt, LORD,
Restored my life within.


3 The sorrows of the wicked
Increase from year to year,
But those that trust the LORD God
Know love instead of fear.
Then in the LORD be joyful,
In song lift up your voice;
Be glad in God, you righteous:
Rejoice, O saints, rejoice!

A testimony to the blessedness of the forgiven and an exhortation to the trust, obedience, and joyful worship that should mark their lives.

Psalm 32 is traditionally considered a penitential psalm (along with 6, 38, 51,102, 130, and 143). In the sequence of spiritual experience it follows the situation depicted in Psalm 51, the great plea for forgiveness. That psalm's traditional association with David's sin against Uriah, together with Psalm 32's reference to delayed confession, has suggested a historical link between the two. The psalm's thematic movement is noteworthy and is well represented in the versification, which is slightly altered from that of the 1912 Psalter.

The psalm begins with a testimony to the blessedness of those forgiven by God (st. 1). Retracing the spiritual movement from stubbornly denying sin to experiencing the joy of God's forgiveness (st. 2), the psalm exhorts all the godly to faithfully rely on God and reaffirms the LORD as refuge and hiding place (st. 3). Next God speaks, instructing the saints in godly obedience (st. 4). The psalm then contrasts the lot of the wicked with that of those who trust in God, and it closes with a call to the righteous to rejoice in God for his unfailing mercies (st. 5).

Liturgical Use
Though considered penitential, this psalm is properly used not so much in confession of sin as in thanksgiving for God's forgiveness of our sin. It is a joyful psalm! Within that context, the psalm could also serve as a call to confession (st. 1-3) and instruction for godly living following the assurance of pardon (st. 4-5).


[How blest is he whose trespass] (McGranahan)

All tunes published with 'How Blest Is He Whose Trespass'^ top 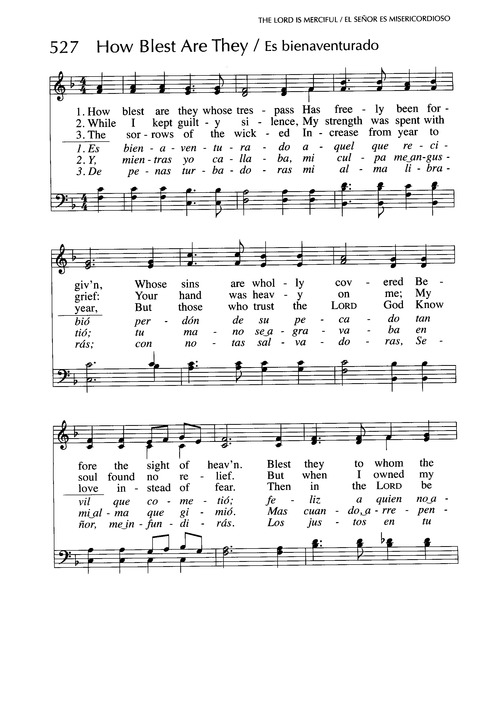 Hymns to the Living God #89

Psalms for All Seasons #32A

Display Title: How Blest Is He Whose Trespass First Line: How blest is he whose trespass Tune Title: RUTHERFORD Meter: 7.6.7.6.D. Scripture: Psalm 32; Romans 4:7-8 Date: 2018 Subject: Christians | Blessedness of; Confession and repentance | ; Joy | ; Sin and Forgiveness | Source: The Psalter, 1912
Trinity Psalter Hymnal #32B
Include 14 pre-1979 instances
All instances^ top
Suggestions or corrections? Contact us