How firm a foundation, ye saints of the Lord

1 How firm a foundation, ye saints of the Lord,
is laid for your faith in God's excellent Word!
What more can be said than to you God hath said,
to you who for refuge to Jesus have fled?


2 "Fear not, I am with thee, O be not dismayed,
for I am thy God, and will still give thee aid;
I'll strengthen thee, help thee, and cause thee to stand,
upheld by my righteous, omnipotent hand.


3 "When through the deep waters I call thee to go,
the rivers of sorrow shall not overflow;
for I will be near thee, thy troubles to bless,
and sanctify to thee thy deepest distress.


4 "When through fiery trials thy pathway shall lie,
my grace, all sufficient, shall be thy supply;
the flame shall not hurt thee; I only design
thy dross to consume, and thy gold to refine.


5 "The soul that on Jesus hath leaned for repose,
I will not, I will not desert to its foes;
that soul, though all hell should endeavor to shake,
I'll never, no, never, no, never forsake."

In John Rippon's A Selection of Hymns (1787, plus numerous subsequent editions), "How Firm a Foundation" (no. 128) is attributed simply to "K—". Two other hymns in the collection bear the same mark, "In songs of sublime adoration and praise," and "The Bible is justly esteemed." The author of the hymn has never been definitively identified, but the most common candidates are listed below. I. Robert Keen(e) The most likely possibility is Robert Keene, who served as precentor at Rippon's church. The evidence for connecting K with Keene comes (1) from his close acquaintance with Rippon, (2) Rippon's tune book, and (3) the testimony (of sorts) of Thomas Walker. After Rippon started publishing a tune book, A Selection of Psalm and Hymn T… Go to person page >

George Keith, according to D. Sedgwick, was the author of "How firm a foundation, ye saints of the Lord." Little is known about Keith, save that he was a publisher, a son-in-law of Dr. Gill, and the composer of several hymns. --Annotations of the Hymnal, Charles Hutchins, M.A. 1872. Go to person page >

Robert Keen (or Keene) was the leader of music and the Carter Lane Baptist Church in London when John Rippon was the pastor. It was during this time that Rippon collected and published his Selections in 1787. He is the likely author of "How Firm a Foundation." Go to person page >
^ top

Based on Isaiah 43: 1-5, this text was given the heading “Exceeding great and precious Promises. II Peter 3:4” [sic. II Peter 1:4] in John Rippon's A Selection of Hymns (1787). The author was listed simply as "K" Although some scholars are not convinced of this attribution, "K" presumably refers to Richard Keen, song leader in the London church where Rippon was minister. With minor alterations, stanzas 1, 3-5, and 7 are included from the original seven stanzas.

"How Firm a Foundation" is a noble text, full of comfort for God's people whose "foundation" of faith is rooted in the Word (st. 1) and whose lives experience divine protection when they face "deep waters" and "fiery trials" (st. 2-4). The final stanza clearly moves beyond the text's Old Testament source and proclaims the certainty of redemption in Christ.

A Baptist minister, Rippon (b. Tiverton, Devonshire, England, 1751; d. London, England, 1836) was called to the Baptist Church in Carter Lane, London, in 1772 as an interim pastor. After becoming head pastor, he stayed in that position for sixty-three years. He also edited the Baptist Annual Register (1790-1802). His main contribution to hymnody was his compiling of A Selection of Hymns from the Best Authors, Intended As an Appendix to Dr. Watts' Psalms and Hymns (1787) and A Selection of Psalm and Hymn Tunes (1791). These publications became popular in both England and America. However, later hymnologists have often been frustrated by Rippon's work because he frequently did not indicate the authors of the hymns and often altered the texts without acknowledging his changes.

Liturgical Use:
Many occasions of worship that focus on redemption and providence; as a hymn of comfort for those in difficult or tragic circumstances; baptism; profession of faith; prior to reading of Scripture.
--Psalter Hymnal Handbook

How firm a foundation, ye saints of the Lord. Keen. [Perseverance of the Saints.] This hymn appeared in Rippon's Selection, 1787, No. 128, in 7 stanzas of 4 lines, and entitled, “Exceeding great and precious promises." In 1822 it was repeated in A. Fletcher's Baptist Collection of Hymns, No. 296, in 4 stanzas, the omitted stanzas being ii., iv. & v. Two arrangements of the text were thus handed down to modern hymnals. In the 1835 edition of Fletcher's Collection, the full original text is restored. This is repeated in Spurgeon's Our Own Hymn Book, 1866, No. 732, and other hymn-books.
The authorship of this hymn has been the subject of much enquiry. We have (1) in modern editions of Rippon the name of "Kirkham"; (2) in Fletcher's 1835 edition as above, "Keen"; (3) and in Spurgeon's Our Own Hymn Book, "George Keith."
1. Rippon's original signature was "K—." In modern editions, which are not published by Dr. Rippon's representatives, the "K—“ is extended into "Kirkham," but on what authority we cannot say.
2. The ascription in Miller's Singers and Songs, 1869, p. 349, we find from the Sedgwick Manuscript, is based upon nothing but the statement of an old woman whom Sedgwick met in an almshouse.
3. In Fletcher's Collection, 1822, the "K—" of Rippon is extended to "Kn," and in the edition of 1835 this is still further extended to "Keen," and so it remains. That this is more likely to be correct than either of the other two is gathered from the fact that Dr. Fletcher was assisted in his work by Thomas Walker, the editor of Dr. Rippon's Tune Book, to whom he specially refers in these words:—"Great assistance has been obtained from Mr. Walker, Compiler of Dr. Rippon's Tune Book, and the Editor of the Companion to it, called Walker's Companion; and it is but justice to acknowledge that the principal choice of Hymns and the application of Tunes, has been effected by his extensive knowledge of sacred poetry, and long tried acquaintance with the science of sacred music." Preface, London, Nov. 1822.
In addition, in the Index of the "Names of such Authors of the Hymns as are known," the name "Keen," with the abbreviation “Kn," is also given. Taking Mr. Walker's acquaintance with Dr. Rippon's work into account, we are justified in concluding that the ascription to this hymn must be that of an unknown person of the name of Keen.
The following hymns bear the same signature as the above in Dr. Rippon's Selection, 1787.
1. In songs of sublime adoration and praise (Distinguishing Grace). This is given in Spurgeon's Our Own Hymn Book, on Sedgwick's authority, as "George Keith, 1787."
2. The Bible is justly esteemed (Holy Scriptures).
From the fact that these two hymns have a common signature in Rippon’s Selection, 1787, with "How firm a foundation," &c, and that the three appeared there for the first time, we also ascribe them to Keen. Miller, in his Singers and Songs of the Church, 1869, bases his note on George Keith on the unsupported word of D. Sedgwick as above.

The anonymous tune FOUNDATION first appeared in Joseph Funk's A Compilation of Genuine Church Music (1832) as a setting for this text (there it was called PROTECTION). The tune was also published with the text in Southern Harmony and Sacred Harp. The ancestors of Joseph Funk (b. Lancaster County, PA…

All tunes published with 'The Firm Foundation'^ top

“How Firm a Foundation” is a hymn that for over two centuries has assured believers of the faithfulness of Christ and the certainty of hope. The first verse acts almost as an introduction to the rest of the text, giving us cause to stop and ponder the Word of assurance that God has given us, described in greater detail in the next four verses. Those four verses are in fact paraphrases of Scripture passages: Isaiah 41:10, 43:2, Romans 8:3-39, Hebrews 13:5, and Deuteronomy 31:6. In the words of this hymn then, we carry with us the Word from God, and the call to trust in that Word. But God’s Word is expansive and not limited to letters on a page - the fifth verse moves us to a trust in the Word made flesh in Jesus Christ. Thus we are assured by the words we sing, the Word we are given, and the Word made flesh, of the steadfastness of God and His unfailing love.

This hymn, believed by most to have been written by Richard Keen, was first published in 1787 in John Rippon’s A Selection of Hymns (Rippon was minister at the London church Keen attended). Keen’s text originally included seven stanzas and was entitled “Exceeding great and precious promises.” It appeared in A. Fletcher Baptist’s 1822 Collection of Hymns in only four stanzas, omitting the original second, fourth and fifth. Today, hymnals include anywhere from three to five stanzas, often the original first, third, fourth, fifth and seventh stanzas. The number of verses found in each hymnal differs, but the actual text has not been altered much. When all five stanzas are used, the text powerfully moves from references to the faithfulness of God in the Old Testament to the certainty of the faithfulness of Christ.

Almost every hymnal and version sets the text to the anonymous tune FOUNDATION, first appearing under the name SINCERITY and SOLICITUDE in Southern Harmony, and appearing with this text in the Sacred Harp. It now appears in most hymnals in the key of G. In the Episcopal Hymnal, the text is set to both FOUNDATION and LYONS, by Haydn. A less commonly used tune is ADESTES FIDELES, best known as the tune for “O Come, All Ye Faithful.”

A regal and stately American folk tune, the accompaniment should support the message of the text, the steadfastness and faithfulness of our God. Here are a few options for accompaniment:

Many times this hymn is used just to emphasize the value of Scripture, but it can be used throughout the year as a hymn of comfort and a declaration or profession of faith. It works well as a hymn of response to a Scripture passage or sermon that calls us to depend on God, or as a response to the Words of Assurance. You could use verse 1 as a prayer for illumination, and bring verses 2-5 back after the prayers of the people. 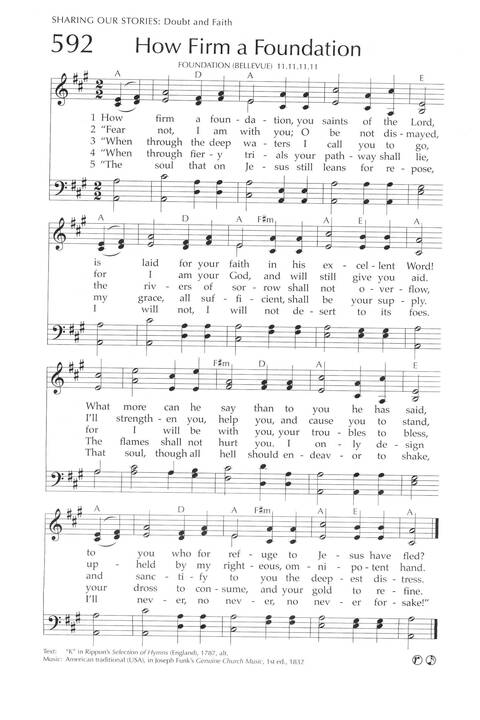 Display Title: How Firm a Foundation First Line: How firm a foundation, you saints of the Lord Tune Title: FOUNDATION Date: 2018 Subject: Faith and Commitment | Source: John Rippon, 1751-1836, A Selection of Hymns, alt.
A Teaching Hymnal #142

Great Songs of the Church (Revised) #493

Hymns for a Pilgrim People #248

Hymns of the Christian Life #405

Hymns of the Christian Life #406

Psalms for All Seasons #11B

Rock of Ages A Worship and Songbook for Retirement Living #59

Display Title: How Firm a Foundation First Line: How firm a foundation, ye saints of the Lord Date: 2002
Rock of Ages A Worship and Songbook for Retirement Living #59

Sacred Selections for the Church #214

Display Title: How Firm a Foundation First Line: How firm a foundation, ye saints of the Lord Date: 2012
The Family Hymnal #26

The Hymnal for Worship and Celebration #275

The Sacred Harp #72b

The Song Book of the Salvation Army #653

Welsh and English Hymns and Anthems #5b

Welsh and English Hymns and Anthems (Reformatted) #5b

Worship and Service Hymnal #279a

Worship and Service Hymnal #279b

Include 1917 pre-1979 instances
All instances^ top
Suggestions or corrections? Contact us