How Vast the Benefits Divine

How vast the benefits divine

1 How vast the benefits divine
which we in Christ possess!
We are redeemed from sin and shame,
and called to holiness.
'Tis not for works that we have done,
these all to him we owe;
but he of his electing love
salvation doth bestow.


2 To thee, O Lord, alone is due
all glory and renown;
aught to ourselves we dare not take,
or rob thee of thy crown.
Thou wast thyself our Surety
in God's redemption plan;
in thee his grace was given us,
long ere the world began.


3 Safe in the arms of sov'ereign love
we ever shall remain;
nor shall the rage of earth or hell
make thy sure counsel vain.
Not one of all the chosen race
but shall to heav'n attain;
here they will share abounding grace,
and there with Jesus reign.

This teaching text presents in song the essential points of the doctrine of redemption (like 496 but more comprehensively): only in Christ are we saved, for we have no merit of our own. Our redemption was ordained "before the world began" (see election texts referred to in 496), and our salvation ultimately leads to ruling with Christ in his kingdom.

Toplady is primarily known for writing "Rock of Ages" and for being an outspoken Calvinist opponent of John Wesley (PHH 267). After his father's death, Toplady moved with his mother to Ireland, where he studied at Trinity College, Dublin. He experienced a conversion while listening to the Wesleyan Methodist lay preacher James Morris. Ordained in the Church of England in 1762, Toplady served several congregations, including Broadhembury in Devonshire (1770-1775) and the Chapel of the French Calvinists in Leicester Fields, London, from 1775 on. Although converted under the preaching of a Methodist, Toplady became a bitter opponent in sermons and print of John Wesley and his Arminian teaching. Often using scurrilous language, such as "Wesley is guilty of Satanic shamelessness," he pressed his Calvinistic interpretation of the Bible, to which Wesley responded with equal disdain. Toplady wrote 130 hymn texts and produce Poems on Sacred Subjects (1769) and Psalms and Hymns for Public and Private Worship (1776).

Liturgical Use:
With preaching on redemption, probably after the sermon; Lent.

ST. MATTHEW was published in the Supplement to the New Version of Psalms by Dr. Brady and Mr. Tate (1708), where it was set to Psalm 33 and noted as a new tune. The editor of the Supplement, William Croft (PHH 149), may be the composer of ST. MATTHEW. One of the longer British psalm tunes, it has a…

All tunes published with 'How Vast the Benefits Divine'^ top 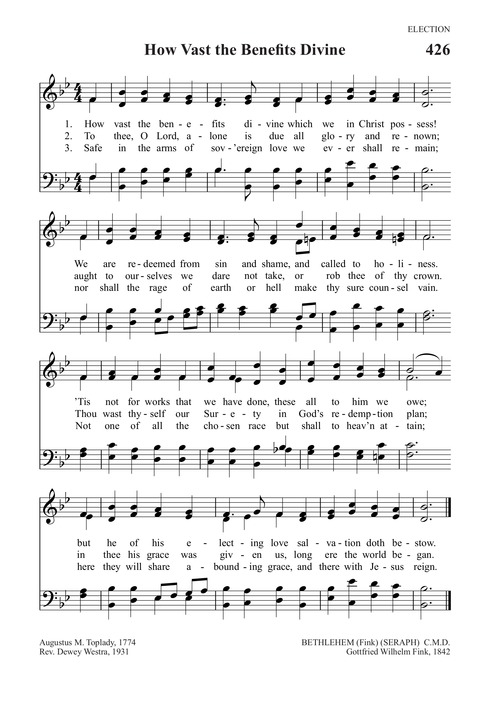