I Will Exalt My God, My King (Te Exaltaré Mi Dios, Mi Rey) 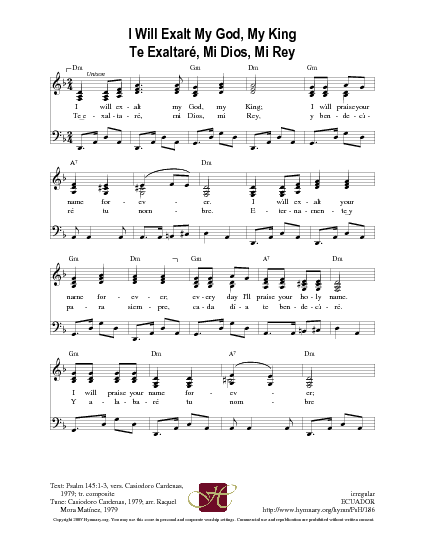 I will exalt my God my King (Te exaltaré mi Dios, mi Rey)


2 Each generation to the next
will proclaim your works of splendor,
and celebrate your mighty deeds.
Every day I’ll praise your holy name. [Refrain]


Source: Lift Up Your Hearts: psalms, hymns, and spiritual songs #37

Casiodoro Cardenas, an Ecuadoran, based this song on Psalm 145: 1-3. The English translation of the text includes work in 1985 by Frank Sawyer (PHH 250) and in 1986 by Bert Polman (PHH 37). "Te Exaltaré" was published in Ecuador in 1975 in Tiempo de Cantar (vol. 2) and in the United States in Celebremos I (1979), a collection of Hispanic songs produced by the United Methodist Church. See PHH 145 for textual commentary on Psalm 145.

Liturgical Use:
At the beginning of worship as an entrance psalm of praise, at the offering as a psalm of dedication, or at the conclusion as a psalm of commitment to honor the Lord. See also PHH 145.

ECUADOR, composed by Cardenas, consists of four musical phrases repeated and combined in various ways. The tune was arranged by Raquel Mora Martinez (b. Allende, Coahuila, Mexico, 1940) for Celebremos; she served on the editorial committee that prepared that collection of Hispanic songs and also sup…

All tunes published with 'I Will Exalt My God, My King (Te Exaltaré Mi Dios, Mi Rey)'^ top Psalms for All Seasons #145C