I will tell and sing the gospel story

I will tell and sing the gospel story 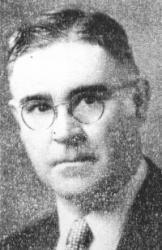 John Melvin Henson, 1887-1972 Born: August 23, 1887 in Cur­ryille, Georg­ia. Died: Ap­ril 22, 1972, At­lan­ta, Georg­ia. John Melvin Henson, who was born on Aug. 23, 1887, at Curryville, GA, and began teaching in singing schools in 1909. With Homer F. Morris, he founded the Morris-Henson Company. During his lifetime, he produced over 200 gospel songs, including "Anywhere Is Home," perhaps his best known, along with "I’ll Live In Glory," and "Happy Am I," that have appeared in some of our books. "Watching You" was copyrighted in 1915. The copyright was later owned by R. E. Winsett and eventually became the property of Ellis J. Crum. Henson died in 1972. --hymnstudiesblog.wordpress.com Go to person page >
^ top