1 Immortal, invisible, God only wise,
in light inaccessible hid from our eyes,
most blessed, most glorious, the Ancient of Days,
almighty, victorious, thy great name we praise.


2 Unresting, unhasting, and silent as light,
nor wanting, nor wasting, thou rulest in might;
thy justice like mountains high soaring above
thy clouds, which are fountains of goodness and love.


3 To all life thou givest, to both great and small;
in all life thou livest, the true life of all;
we blossom and flourish as leaves on the tree,
and wither and perish but naught changeth thee.


4 Great Father of glory, pure Father of light,
thine angels adore thee, all veiling their sight;
all praise we would render, O help us to see
'tis only the splendor of light hideth thee. 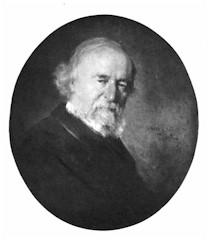 Walter C. Smith based this text on 1 Timothy 1: 17: "Now to the King eternal, immortal, invisible, the only God, be honor and glory for ever and ever." The six-stanza text was published in Smith's Hymns of Christ and the Christian Life (1867) and, after having been revised by Smith, in W. Garrett Horder's Congregational Hymns (1884). Further revisions were made by the Psalter Hymnal Revision Committee.

"Immortal, Invisible" is a strong text of praise to God, who created and sustains the lives of all his creatures. The text focuses on the Creator of the universe, the invisible God whose visible works in nature testify to his glory and majesty. "Light" is the prevailing image in stanzas 1, 2, and 4 (see also Ps. 104:2); our inability to see God is not because of insufficient light but because the "splendor of light hides [God] from view."

Walter Chalmbers Smith (b. Aberdeen, Scotland, 1824; d. Kinbuck, Perthshire, Scotland, 1908) was educated at the University of Aberdeen and New College, Edinburgh, and became a Presbyterian pastor in the Free Church of Scotland in 1850. He served four congregations, including the Free High Church in Edinburgh (1876¬-1894). Moderator of his denomination in 1893, Smith was a man of wide interests. His poetry was published in some six volumes entitled Poetical Works (1902), and his hymn texts were published in Hymns of Christ and the Christian Life (1886).

Liturgical Use
A festival hymn of praise to God; for various other worship services, especially at the beginning of the service; with stanza 3 for services that focus on the brevity of life.

All tunes published with 'Immortal, Invisible, God Only Wise'^ top

This hymn was originally published under this Scripture: “Now unto the King eternal, immortal, invisible, the only wise God, be honor and glory for ever and ever. Amen” (1 Timothy 1:17 KJV). After paraphrasing this verse in the first stanza, the author goes on to elaborate on the themes of light, immortality, and glory in the following stanzas.

Walter Chalmers Smith wrote this hymn in six stanzas based on 1 Timothy 1:17 and published it in his Hymns of Christ and the Christian Life in 1867. Percy Dearmer edited the text into a four-stanza version for the English Hymnal in 1906; this version is now standard. Most hymnals include all four stanzas, though sometimes with further revision. In the first, second, and fourth stanzas, blinding light is the prevailing metaphor for God's glory. The theme of stanza three is the eternal God as the Giver of life.

ST. DENIO is a tune of Welsh origin. It is also known as JOANNA and may have been based on a Welsh folk song. The tune was first published under the name PALESTRINA in a sacred song collection in 1839. The editors of the English Hymnal paired ST. DENIO with “Immortal, Invisible” in 1906. Though the tune begins on the tonic note, the first three notes outline a different chord. Despite this, it is fairly easy for congregations to sing. Sing this sturdy tune in unison or in harmony with vigorous accompaniment.

This hymn can be sung at any time of year as a hymn of praise. The vigorous tune works well for festival settings. "Immortal, Invisible, God Only Wise" is for organ and handbells and includes an optional trumpet trio. A festival setting for organ and congregation is found in “The Coral Ridge Festival, vol. 1.” Another arrangement of “Immortal, Invisible” is introduced and concluded by the choir, and is a great setting for congregational accompaniment. “Walk Worthy” contains an energetic piano solo on ST. DENIO. A concertato arrangement of “Immortal, Invisible, God Only Wise” for congregation, choir, organ, and trumpet features a range of moods to suit the text. 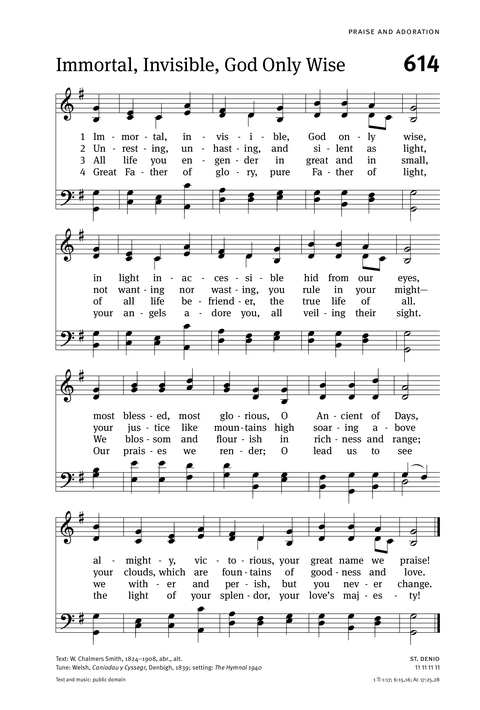 A New Hymnal for Colleges and Schools #69

Great Songs of the Church (Revised) #75

Hymns for a Pilgrim People #37

Hymns of the Christian Life #15

Hymns to the Living God #36

Praise! Our Songs and Hymns #55

Rejoice in the Lord #7

The Book of Hymns (A fresh anthology of favourite hymns) #12

The Hymnal for Worship and Celebration #25

The Song Book of the Salvation Army #8