1 O worship the King all-glorious above,
O gratefully sing his power and his love:
our shield and defender, the Ancient of Days,
pavilioned in splendor and girded with praise.


2 O tell of his might and sing of his grace,
whose robe is the light, whose canopy space.
His chariots of wrath the deep thunderclouds form,
and dark is his path on the wings of the storm.


3 Your bountiful care, what tongue can recite?
It breathes in the air, it shines in the light;
it streams from the hills, it descends to the plain,
and sweetly distills in the dew and the rain.


4 Frail children of dust, and feeble as frail,
in you do we trust, nor find you to fail.
Your mercies, how tender, how firm to the end,
our Maker, Defender, Redeemer, and Friend!


5 O measureless Might, unchangeable Love,
whom angels delight to worship above!
Your ransomed creation, with glory ablaze,
in true adoration shall sing to your praise!

Robert Grant (b. Bengal, India, 1779; d. Dalpoorie, India, 1838) was influenced in writing this text by William Kethe’s (PHH 100) paraphrase of Psalm 104 in the Anglo-Genevan Psalter (1561). Grant’s text was first published in Edward Bickersteth’s Christian Psalmody (1833) with several unauthorized alterations. In 1835 his original six-stanza text was published in Henry Elliott’s Psalm and Hymns. Stanza 3 was omitted in the Psalter Hymnal.

Rather than being a paraphrase or versification, the text is a meditation on the creation theme of Psalm 104. Stanzas 1-3, which allude to Psalm 104:1-6, focus on God’s creation as a testimony to his “measureless Might.” More personal in tone, stanzas 4 and 5 confess the compassion of God toward his creatures and affirm with apocalyptic vision that the “ransomed creation, with glory ablaze” will join with angels to hymn its praise to God.

Of Scottish ancestry, Grant was born in India, where his father was a director of the East India Company. He attended Magdalen College, Cambridge, and was called to the bar in 1807. He had a distinguished public career a Governor of Bombay and as a member of the British Parliament, where he sponsored a bill to remove civil restrictions on Jews. Grant was knighted in 1834. His hymn texts were published in the Christian Observer (1806-1815), in Elliot’s Psalms and Hymns (1835), and posthumously by his brother as Sacred Poems (1839).

Liturgical Use:
An opening hymn of praise; because of the hymn’s relationship to Psalm 104, see suggestions for use at PHH 104.

O worship the King, All-glorious above. Sir R. Grant . [Psalms civ.] This version of Psalms civ. is W. Kethe's rendering of the same psalm in the Anglo-Genevan Psalter of 1561, reset by Sir R. Grant in the same metre but in a less quaint and much more ornate style, as a quotation of Kethe's stanzas i., iii. will show:—

"My ƒoule praise the Lord,
speake good of his Name
0 Lord our great God
how doeƒt thou appear?
So passing in glorie,
that great is thy fame,
Honour and maieƒtie,
in thee ƒhine moƒt cleare.

"His chamber beames lie,
in the clouds full ƒure,
Which as his chariot,
are made him to beare.
And there with much ƒwiftneƒƒ
his courƒe doth endure:
Vpon the wings riding.
Of winds in the aire."

Sir R. Grant's version was given in Bickersteth's Church Psalmody, 1833, No. 17; in Elliott's Psalms and Hymns, 1835; and in Lord Glenelg's edition of Grant's Sacred Poems. 1839, p. 33. From the Preface to Elliott's Psalms & Hymns we find that the text in Bickersteth was not authorized. It was altered from a source at present unknown to us. The authorized text is in the Hymnal Companion, 1876, with stanza ii., l. 3, thus-—
“His chariots of wrath the deep thunderclouds form."
This text with the omission of the "the" is ill extensive use in all English-speaking countries. It is also in use in an abbreviated and slightly altered form as in Hymns Ancient & Modern, 1861 ; and in the full form, but still altered as before, in Hymns Ancient & Modern1875. The 1839 text is in Church Hymns, 1871; Hymnal Companion, 1876; Turing's Collection, 1882, and others. It has been translation into Latin by R. Bingham, in his Hymnologia Christiana Latina, 1871, p. 143, as, "Glorioso ferte Regi vota vestra carmine."

Sir Robert Grant stood as a man among men, serving both as a member of British Parliament and the governor of Bombay. Though himself of royal station, Grant's pen attested to the highest adoration-- his Maker. The regal prose of his pen ran rich in the lofty expressions and majestic declarations which attested to a humble concession to a being so much higher than himself.

“In the beginning God created the heavens and the earth.” These may be some of the best-known words in the Bible, but in 1835, Robert Grant wrote a text that helps us see the creation story in a new light. His meditation on the creation theme of Psalm 104 consists of six verses that parallel the six days of creation. But rather than simply paraphrase the psalm or the first two books of the Bible, Grant focuses on how creation is a testimony to God’s “measureless might.” And Grant’s beautiful text doesn’t stop at Genesis Two. Rather, in the fourth and fifth verse we celebrate God’s saving grace to his creation. When God took that seventh day of rest, he was not signaling an end. He continued to bless His creation, even those as feeble and frail as us. In the last verse, Grant points to Christ as the ultimate reconciler of a broken, but still beautiful creation. An original last stanza that we no longer sing reads, “The humbler creation, though feeble their lays, with true adoration shall lisp to Thy praise.”

Grant’s text is a resetting of William Kethe’s rendering of Psalm 104 first published in 1561. Albert Bailey wrote of this text: “It is no small accomplishment to combine, as this hymn does, the majestic, the tender, and a smooth-flowing poetical rendering” (Gospel in Hymns, 182). The text has not been changed much from Grant’s original. Some verses are not included in all hymnals – unlike most hymnals, the Psalter Hymnal leaves out the original third stanza, which reads, “The earth with its store of wonders untold, Almighty, thy power hath founded of old; hath ‘stablished it fast by a changeless decree, and round it hath cast, like a mantle, the sea.” The Psalter Hymnal does, however, include a verse many hymnals leave out, beginning “O measureless Might.”

The most common tune for Grant’s text is LYONS. For most of the tune’s existence, its composition was attributed to either of the Haydn brothers. In 2000, Margaret K. Dismore discovered that the tune was actually composed by Joseph Martin Kraus, a German composer who was probably in London, along with Haydn, when Kraus’ sonata was premiered, the first line of which became the theme of this hymn tune. Hymn tune analyst Paul Westermeyer describes this tune as an example of a popular instrumental melody broken into a “congregational idiom,” and done quite well (Let the People Sing, 204).

A second tune that is often put to Grant’s text is HANOVER. This tune also had a mix-up over who actually composed it. For many years it was attributed to Handel, but is now generally ascribed to William Croft. Both of these tunes are excellent. HANOVER is spritely, but does jump around a bit melodically, while LYONS tends to have steadier climbs and natural progressions, and might be more comfortable for congregations, unless you’ve been singing HANOVER for a long time already. If you’re looking for an arrangement for worship band, Chris Tomlin has a version with an easily adaptable riff for violin or electric guitar, and a great original chorus.

“O Worship the King” is most often used as a hymn of gathering and a call to worship. It can be used any time during the liturgical calendar, but it would be especially fitting on Christ the King Sunday, the last Sunday before Advent. It could be paired well with the contemporary song “He Reigns” and the great hymn, “All Creatures of Our God and King.” 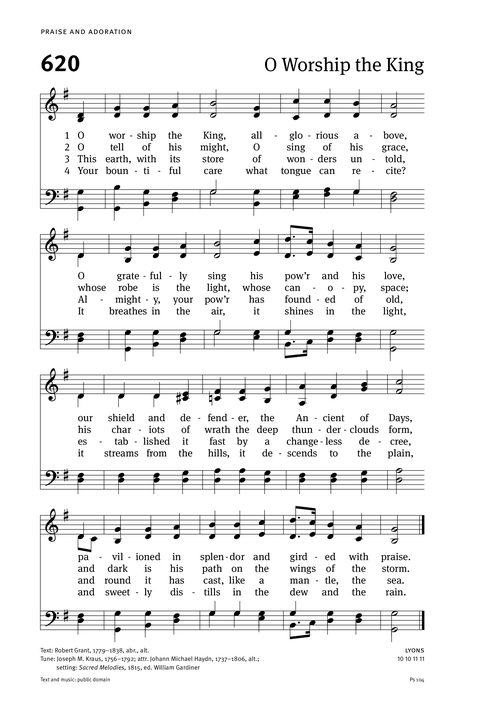 A New Hymnal for Colleges and Schools #6

Great Songs of the Church (Revised) #87

Hymns for a Pilgrim People #38

Hymns of the Christian Life #12

Hymns of the Church #6

Hymns to the Living God #29

Lift Up Your Hearts #2

Praise! Our Songs and Hymns #28

Psalms and Hymns and Spiritual Songs #1

Psalms for All Seasons #104F

Rejoice in the Lord #2

The Book of Hymns (A fresh anthology of favourite hymns) #17

The Hymnal for Worship and Celebration #10

The Hymnal of the Christian Methodist Episcopal Church #9

The Song Book of the Salvation Army #16

Include 992 pre-1979 instances
All instances^ top
Suggestions or corrections? Contact us