This song is about the importance of God's presence in times of sorrow and trial. As we beg for God's presence, we are echoing the call of God's people through many centuries: “Give ear to my prayer, O God, and hide not yourself from my plea for mercy!” (Psalm 55:1 ESV) We can ask with assurance, for Jesus said, “Again I say to you, if two of you agree on earth about anything they ask, it will be done for them by my Father in heaven. For where two or three are gathered in my name, there am I among them.” (Matthew 18:19-20 ESV)

There has been great debate over the origins of this song. At least three distinct stories have come to varying stages of acceptance by the public. One story is that it originated in the southern coastal regions of the U.S., near South Carolina and northern Florida, where Gullah, an African-American dialect, is spoken.

Another story comes from the authorship claims of Marvin Frey. He claimed to have written the song at a Christian Crusade camp in 1936, at age seventeen, with the original first line “Come by here.” Another camper took the song home to his missionary parents, who in turn took it to Angola, where it was altered to “Kum ba yah,” and then brought back to the U.S. as an African song. Frey has claimed a copyright on the song.

The third and most likely story is that it is an African-American spiritual that originated at an unknown date in the American South. This is supported by the existence of a cylinder recording of the song in the American Folklife Center archives in the Library of Congress. The recording was collected in 1926 – ten years before Frey claimed to have written it – in Georgia by Robert Gordon and was sung by H. Wylie. A transcription of that recording bears a close resemblance to the song we know today in the structure of the tune and the form and wording of the lyrics.

This folksong has become popular all over the world. It was most popular from the 1950s to 1990s, but its use started declining in the 1980s. Today, outside of church, the name of the song has become idiomatic for naïve, superficial peace. It is often thought of as a children's song, but it can be sung by all of God's people as a request for His presence in times of trial.

There are many stanzas to this song. The first stanza is “Kum ba yah,” which is, of course, the title of the song. Most of the other stanzas are on a sad theme: “Someone's crying,” “Someone's hurting,” etc. A few are on a happier note: “Someone's singing,” “Let us praise the Lord,” etc. As with many folk songs, there is no single accepted version.

The tune KUM BA YAH has the same origins as the text. A few hymnals call it DESMOND, after the South African archbishop, Desmond Tutu.

KUM BA YAH is sometimes written in triple meter, and sometimes in duple. It is best sung in unison with little or no accompaniment. The desired mood should determine the tempo. For the subdued stanzas, keep the tempo moderate to slow. For the upbeat stanzas, move the tempo ahead.

This song could be used to open a worship service. It is often used for children's services. “God Is Calling Us” is a choral piece for a children’s choir combining an original song by Natalie Sleeth with this traditional spiritual. A setting of “Kum Ba Yah” for an adult choir employs expanded harmony and a variety of textures in singing through this song. Joel Raney’s setting of “Kum Ba Yah” alters the accompaniment and texture to suit the text of each stanza. Both adult and children’s choirs are featured, with optional percussion adding interest to the piano accompaniment. For an instrumental prelude, “Kum Ba Yah: A Suite for Piano and Organ” contains six short movements in a variety of styles. 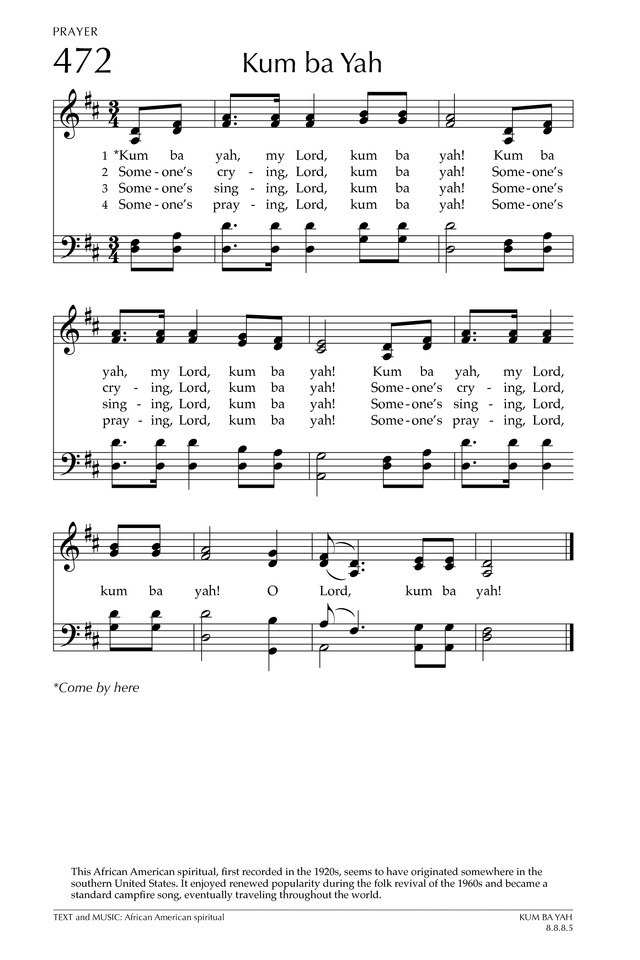 Psalms for All Seasons #79A