What a Friend We Have in Jesus

What a friend we have in Jesus, All our sins and griefs to bear 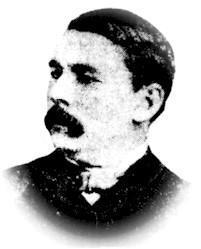 Joseph M. Scriven (b. Seapatrick, County Down, Ireland, 1819; d. Bewdley, Rice Lake, ON, Canada, 1886), an Irish immigrant to Canada, wrote this text near Port Hope, Ontario, in 1855. Because his life was filled with grief and trials, Scriven often needed the solace of the Lord as described in his famous hymn. Educated at Trinity College, Dublin, Ireland, he enrolled in a military college to prepare for an army career. However, poor health forced him to give up that ambition. Soon after came a second blow—his fiancée died in a drowning accident on the eve of their wedding in 1844. Later that year he moved to Ontario, where he taught school in Woodstock and Brantford. His plans for marriage were dashed again when his new bride-to-be di… Go to person page >
^ top

Joseph M. Scriven (b. Seapatrick, County Down, Ireland, 1819; d. Bewdley, Rice Lake, ON, Canada, 1886), an Irish immigrant to Canada, wrote this text near Port Hope, Ontario, in 1855. Because his life was filled with grief and trials, Scriven often needed the solace of the Lord as described in his famous hymn.
Educated at Trinity College, Dublin, Ireland, he enrolled in a military college to prepare for an army career. However, poor health forced him to give up that ambition. Soon after came a second blow–his fiancee died in a drowning accident on the eve of their wedding in 1844. Later that year he moved to Ontario, where he taught school in Woodstock and Brantford. His plans for marriage were dashed again when his new bride-to-be died after a short illness in 1855. Following this calamity Scriven seldom had a regular income, and he was forced to live in the homes of others. He also experienced mistrust from neighbors who did not appreciate his eccentricities or his work with the underprivileged. A member of the Plymouth Brethren, he tried to live according to the Sermon on the Mount as literally as possible, giving and sharing all he had and often doing menial tasks for the poor and physically disabled. Because Scriven suffered from depression, no one knew if his death by drowning in Rice Lake was suicide or an accident.

Scriven wrote "What a Friend" to comfort his sick mother in Dublin, possibly right after the death of his second fiancee. When asked by a neighbor about his writing of the text, Scriven modestly commented, “The Lord and I did it between us.” The text was published anonymously in Horace Hastings's Social Hymns, Original and Selected (1865), but Scriven was given proper credit in Hastings's Songs of Pilgrimage (1886). Ira D. Sankey (PHH 73) included the text, set to the familiar tune by Charles C. Converse, in his various hymnals (from 1875 on).

Scriven's text clearly arises from his own experiences in life. Although not great poetry, the text has spiritual appeal and an effective repeated phrase, "take it to the Lord in prayer." Because of its simple encouragement to "pray without ceasing," the text is much loved in many circles of Christendom. A collection of his poetry was published in Hymns and Other Verses (1869).

Liturgical Use:
As a hymn of encouragement to pray amid the "sins and griefs" we encounter on our journey of life.

CONVERSE (also "Erie", named for the city in Pennsylvania where the composer lived for many years) was written in 1868 and published two years later in his Silver Wings under the pseudonym Karl Reden. The tune has also been called "Friendship." –Hymnal Companion to the Lutheran Book of Worship

The life of Joseph M. Scriven, the author of this text, was hard and filled with tragedy. At a young age he had to give up his military ambitions due to poor health. Things were looking up as he prepared to be married, but on the eve before his wedding, his fiancée died tragically in a drowning accident. Scriven moved to Rice Lake, Ontario, and was soon to be wed again. His second fiancée, however, also died suddenly from an illness shortly before the wedding. With no job in a hard economy, Scriven had to live with friends and acquaintances. His volunteer work with the impoverished and sickly as he tried to live as closely to the Sermon on the Mount as possible was frowned upon by those friends, however, and they quickly disassociated themselves from him. Penniless and alone, Scriven was later found drowned in Rice Lake.

It’s a tragic story and, like all tragedies, hard to make sense of. And yet, God still works in and through our stories and losses to fulfill His purposes. Shortly after Scriven moved to Ontario, it’s said he wrote the text “What a Friend” to send back to his mother in Ireland to comfort her in a time of sorrow. After its publication, a neighbor asked if Scriven really did write it, and he replied, “The Lord and I did it between us” (Lutheran Hymnal Handbook). As one of the best-known hymns of comfort, it is certain that the Lord used Scriven to bless many in their own times of sorrow.

Scriven’s text has remained largely unchanged since it was first published in 1857. The verses build on one another, carrying the same theme throughout: first raising the questions we have about our pain and sorrow, and then answering those questions with assurance of God’s power and love. As the editors in the Psalter Hymnal Handbook write, the text “is not great poetry,” but it has “spiritual appeal and an effective repeated phrase, ‘take it to the Lord in prayer.’” Albert Bailey goes so far as to describe the repetition as “doggerel,” but adds that this provides a good teaching tool (The Gospel in Hymns, 495).

The tune CONVERSE, written by Charles C. Converse, in 1868, is almost universally paired with Scriven’s text. It is a tune that speaks of assurance and hope, and with its uplifting melody, there is a temptation to play it too quickly. The text, though, demands adequate consideration as you sing, and though the tune is hopeful, the weight of the words and the sorrow that is implied should give cause to slow the tempo and play with an expressive ear. A good example of this is found in an arrangement by Chelsea Moon and the Franz Brothers.

A good alternative to CONVERSE is the tune BEACH SPRING, attributed to B. H. White, which Emily Brink paired with Scriven’s text in the Psalter Hymnal. This is a far more melancholy tune that brings out the darker side of the text. It would be especially fitting to use this tune when singing this hymn in a time of great sorrow for your congregation; the assurance is needed, but in the context of very real pain. To hear a version of the hymn using this tune, check out this rendition done for a prayer service at Calvin College, on the college’s website under Faith & Worship/LOFT/Archives/LOFT 2010-11/Feb. 6, starting at around 18:00.

This is a hymn that acknowledges the pain we experience in life, and then assures us of the comfort we have in Christ. It would be fitting during most services as a hymn of response after the Prayers of the People, or after a time of confession. It’s especially appropriate during a service themed around God’s hand of mercy in times of suffering, or when we need a reminder of our call to pray without ceasing, even when life gets rough. Try pairing this song with the modern hymn, “Jesus Draw Me Ever Nearer,” or a more subdued, slower version of the well-loved contemporary song, “Blessed Be Your Name.” 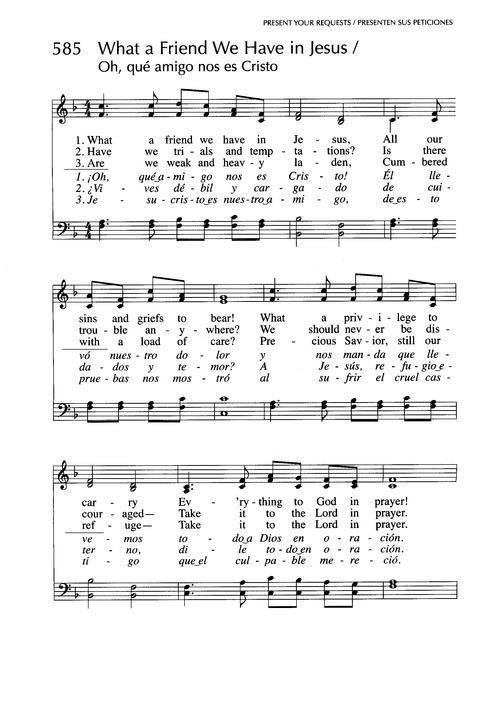 Hymns for a Pilgrim People #408

Hymns of the Christian Life #204

Psalms for All Seasons #41B

Sacred Selections for the Church #63

The Hymnal for Worship and Celebration #435

The Irish Presbyterian Hymbook #257a

The Irish Presbyterian Hymbook #257b

The Song Book of the Salvation Army #645