William W. Walford, a blind preacher of England, is the author of the hymn beginning "Sweet hour of prayer." This hymn first appeared in print in the New York Observer September 13, 1845. The contributor who furnished the hymn says: "During my residence at Coleshill, Warwickshire, England, I became acquainted with W. W. Walford, the blind preacher, a man of obscure birth and connections and no education, but of strong mind and most retentive memory. In the pulpit he never failed to select a lesson well adapted to his subject, giving chapter and verse with unerring precision, and scarcely ever misplacing a word in his repetition of the Psalms, every part of the New Testament, the prophecies, and some of the histories, so as to have the r… Go to person page >
^ top

Sweet hour of prayer, sweet hour of prayer. W. W. Walford. [Prayer.] In Nutter's Hymn Studies, N. Y., 1884, the note to this hymn is "Mr. Butterworth, in his Story of the Hymns, says, 'This hymn was written by Rev. Mr. Walford, an English blind preacher, and was given to the public in 1849.'" Beyond this we have no information except that the hymn is in several American collections, including the Meth. Episcopal Hymnal, 1878, and that the original consists of 4 stanzas of 8 lines. This hymn is given on p. 1204, ii. 52, as by Mrs. Van Alstyne, in error.

All tunes published with 'Sweet Hour of Prayer'^ top

Sometimes during His earthly ministry, Jesus would withdraw to a secluded place to pray (Mark 1:35, Luke 5:16, etc.). The early church followed His practice of regular prayer (Acts 2:42), and Paul encouraged its continuance in some of his letters. He wrote, “Continue steadfastly in prayer, being watchful in it with thanksgiving” (Colossians 4:2 ESV). This hymn is an expression of the joy that can come when believers, individually and corporately, pray regularly.

The author of this hymn is not known for certain. The text is often attributed to a man named W. W. Walford on the basis of an account in the New York Observer by Thomas Salmon in 1845, where the text was first published. This Walford was a blind, uneducated English preacher who had committed huge portions of the Bible to memory. Salmon would have met him between 1838 and 1842 while serving as pastor of a church in Coleshill, England. However, hymnologists have encountered problems in substantiating Walford's identity through church records, and some attribute the hymn to William Walford of Homerton, England, an educated Congregational minister, who was not blind. Traditionally, however, the hymn has been attributed to the blind preacher.

The theme of the text is the joy of spending time in communion with God through prayer. The text has four stanzas, though sometimes the second (“The joys I feel, the bliss I share”) or the fourth (“May I thy consolation share”) is omitted.

William Bradbury composed SWEET HOUR for this text in 1861 and published it in his Golden Chain. The tune was named after the text and is the only tune to which this hymn is sung. The tempo should not drag, and the accompaniment should be soft. 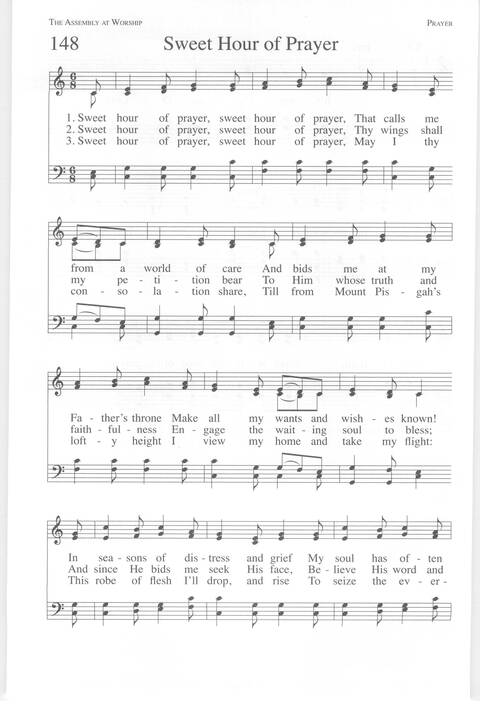 Hymns for a Pilgrim People #413

Hymns of the Christian Life #209

Sacred Selections for the Church #23

The Hymnal for Worship and Celebration #433

The Song Book of the Salvation Army #633