Lead us, heavenly Father, lead us

1 Lead us, heavenly Father, lead us
o'er the world's tempestuous sea;
guard us, guide us, keep us, feed us,
for we have no help but thee;
yet possessing every blessing,
if our God our Father be.

2 Saviour, breathe forgiveness o'er us:
all our weakness thou dost know;
thou didst tread this earth before us,
thou didst feel its keenest woe;
lone and dreary, faint and weary,
through the desert thou didst go.

3 Spirit of our God, descending,
fill our hearts with heavenly joy,
love with every passion blending,
pleasure that can never cloy:
thus provided, pardoned, guided,
nothing can our peace destroy.

Source: Ancient and Modern: hymns and songs for refreshing worship #702

Edmeston, James, born Sept. 10, 1791. His maternal grandfather was the Rev. Samuel Brewer, who for 50 years was the pastor of an Independent congregation at Stepney. Educated as an architect and surveyor, in 1816 he entered upon his profession on his own account, and continued to practice it until his death on Jan. 7, 1867. The late Sir G. Gilbert Scott was his pupil. Although an Independent by descent he joined the Established Church at a comparatively early age, and subsequently held various offices, including that of churchwarden, in the Church of St. Barnabas, Homerton. His hymns number nearly 2000. The best known are “Lead us, Heavenly Father, lead us” and "Saviour, breathe an evening blessing." Many of his hymns were written for c… Go to person page >
^ top

Lead us, Heavenly Father, lead us. J. Edmeston. [Holy Trinity—Invocation of.] Appeared in his Sacred Lyrics, set two, 1821, in 3 stanzas of 7 lines, and entitled "Hymn, Written for the Children of the London Orphan Asylum (Air Lewes)." In 1858 it was included in the Baptist Psalms & Hymns, No. 564, and from that date it has grown gradually into favour until it has attained to a foremost place amongst modern hymns in all English-speaking countries. It is generally given in a correct and complete form as in Thring’s Collection, 1882. It has been rendered into several languages, including Latin. The Rev. R. Bingham, in his Hymnologia Christiana Latina, 1871, has translated it as "Due nos, Genitor Coelestis."

All tunes published with 'Lead us, heavenly Father, lead us'^ top 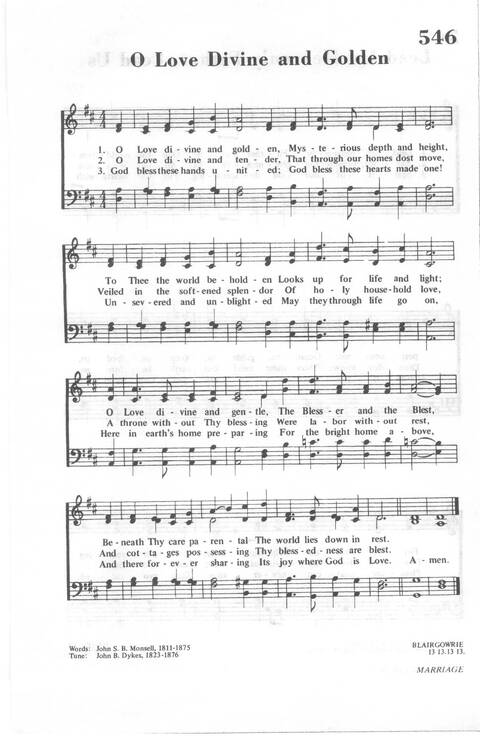 Hymns and Psalms #68a

Hymns and Psalms #68b

The Song Book of the Salvation Army #607