Jesus Calls Us, O'er the Tumult

Jesus calls us, o'er the tumult

1 Jesus calls us o'er the tumult
of our life's wild, restless sea;
day by day his voice invites me,
saying "Christian, follow me!"


2 As the first disciples heard it
by the Galilean lake,
turned from home and toil and kindred,
leaving all for his dear sake.


3 Jesus calls us from the worship
of the vain world's golden store,
from each idol that would keep us,
saying "Christian, love me more."


4 In our joys and in our sorrows,
days of toil and hours of ease,
still he calls, in cares and pleasures,
"Christian, love me more than these."


5 Jesus calls us! In your mercy,
Savior, help us hear your call;
give our hearts to your obedience,
serve and love you best of all!

Irish hymn writer Cecil F. Alexander (PHH 346) wrote this text for St. Andrew's Day. The appointed gospel reading for that day in the church year concerned Jesus' calling of Simon Peter and Andrew (Matt. 4: 18-20). Her text was published in the Society for the Promotion of Christian Knowledge's (SPCK) Hymns for Public Worship (1852). Though written for a relatively minor saint's day, this hymn quickly gained popularity. It was frequently altered (sometimes mutilated) in later hymnals; Alexander herself prepared an inferior revision about twenty years after the text's first publication. The original third stanza is omitted.

The thread that binds the stanzas together is the call of Christ. Just as Jesus called the fishermen to be his disciples, he still calls us today to be his followers and obedient servants. His call is for total commitment, a "follow me" that overrides all our earthly "cares and pleasures."

Liturgical Use:
Worship that focuses on God's call, his summons to obedience; profession of faith; ordination and commissioning; evangelistic meetings.

--Psalter Hymnal Handbook
==================
Jesus calls us; [mid] o'er the tumult. Cecil F. Alexander, née Humphreys. [St. Andrew.] Contributed to the Society for Promoting Christian Knowledge Hymns, &c, 1852, No. 116, in 5 stanzas of 4 lines. Its use has become very extensive in most English-speaking countries. Usually the original text is followed, but here and there slight variations are introduced, as, for instance, in Hymns Ancient & Modern, where stanza iv., line 4, reads, “That we love Him more than these," for "Christian, love Me more than these." In 1871 a mutilated text was given in the S. P. C. K. Church Hymns. This led to a revision of the original by Mrs. Alexander, which was given in the folio edition, 1881, and later editions of Church Hymns, as Mrs. Alexander's authorised text. It is easily recognised by the refrain of stanzas i.—iii., “Softly, clearly—‘Follow Me.’" This text differs very materially from the original, and in comparison with it, will commend itself to very few. In the Anglican Hymn Book, 1868, the opening line reads, "Jesus call us, mid the tumult." Other alterations are also introduced very much to the injury of the hymn.

All tunes published with 'Jesus Calls Us, O'er the Tumult'^ top 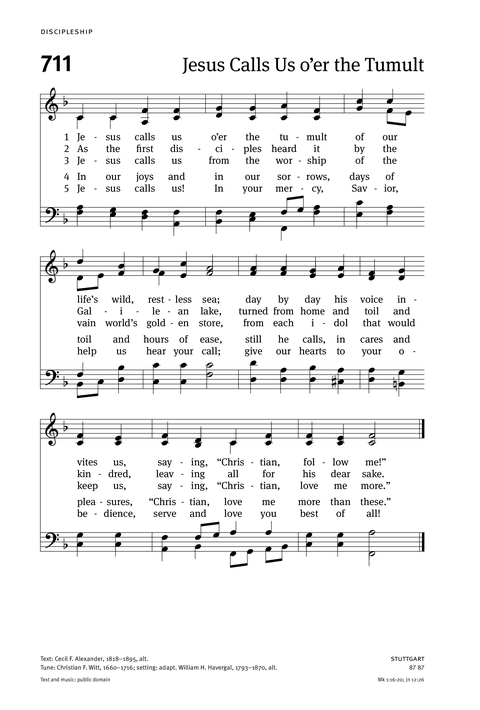 Ancient and Modern #324a

Ancient and Modern #324b

Great Songs of the Church (Revised) #614

Great Songs of the Church (Revised) #615

Hymns for a Pilgrim People #314

Hymns of the Christian Life #221

Sacred Selections for the Church #298

The Hymnal for Worship and Celebration #375

The Song Book of the Salvation Army #428