O Christ, You Wept When Grief Was Raw

O Christ, you wept when grief was raw

Representative text cannot be shown for this hymn due to copyright.
To see the text, purchase a flexscore.
See page scan previews below.

Iona Community, an ecumenical Christian group of men and women based on the small island of Iona off the coast of Scotland. The community began in 1938 when the Rev. George MacLeod of the Church of Scotland began a ministry among the unemployed poor who had been neglected by the church. He took a handful of men to the island to rebuild the ruins of a thousand-year-old abbey church. That rebuilding became a metaphor for the rebuilding of the common life, a return to the belief that daily activity is the stuff of godly service – work, and worship. The Community has since grown to include a group of members, associates, and friends all over the United Kingdom and many other countries. In addition to many conferences that attract people to I… Go to person page >

John Bell (b. 1949) was born in the Scottish town of Kilmarnock in Ayrshire, intending to be a music teacher when he felt the call to the ministry. But in frustration with his classes, he did volunteer work in a deprived neighborhood in London for a time and also served for two years as an associate pastor at the English Reformed Church in Amsterdam. After graduating he worked for five years as a youth pastor for the Church of Scotland, serving a large region that included about 500 churches. He then took a similar position with the Iona Community, and with his colleague Graham Maule, began to broaden the youth ministry to focus on renewal of the church’s worship. His approach soon turned to composing songs within the identifiable traditi… Go to person page >
^ top

Edward Miller (b. Norwich, England, 1735; d. Doncaster, Yorkshire, England, 1807) adapted ROCKINGHAM from an earlier tune, TUNEBRIDGE, which had been published in Aaron Williams's A Second Supplement to Psalmody in Miniature (c. 1780). ROCKINGHAM has long associations in Great Britain and North Amer…

All tunes published with 'O Christ, You Wept When Grief Was Raw'^ top 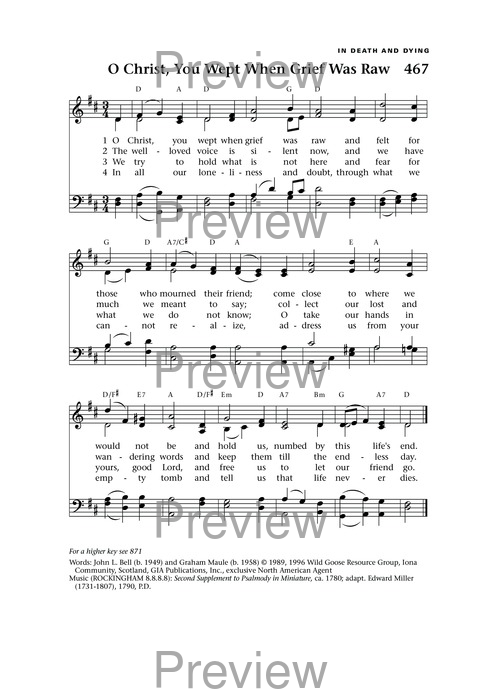