O Lord, turn not thy face away 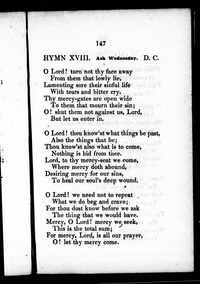 O Lord, turn not thy face away

1 O Lord, turn not Thy face away
From them that lowly lie,
Lamenting sore their sinful life
With tears and bitter cry.


2 Thy mercy-gates are open wide
To them that mourn their sin;
O shut them not against us, Lord,
But let us enter in.


3 We need not to confess our fault,
For surely Thou canst tell;
What we have done, and what we are,
Thou knowest very well.


4 Wherefore, to beg and to entreat,
With tears we come to Thee,
As children that have done amiss
Fall at their father's knee.


5 And need we, then, O Lord, repeat
The blessing which we crave,
When Thou dost know, before we speak,
The thing that we would have?


6 Mercy, O Lord, mercy we seek,
This is the total sum:
For mercy, Lord, is all our prayer;
O let Thy mercy come.

O Lord, turn not Thy face away. J. Marckant. [Lent.] This hymn, known as The Lamentation of a Sinner, is first found in J. Daye's edition of Sternhold and Hopkins, 1560-61 but without signature. In the edition of 1565, the authorship is given to Marckant. This name, sometimes written Market, appears also in the editions of 1595 and 1606. The first stanza is:—

"O Lord, turn not Thy face away
From him that lies prostrate,
Lamenting sore his sinful life
Before Thy mercy gate.”

In The Whole Book of Psalms, &c, by J. Playford, 1677, p. 285, it begins "O Lord, turn not away Thy face."
The authorship of this hymn is given by Miller (Singers and Songs, 1869, p. 46) and by Lord Selborne (Book of Praise, 1862, p. 239, and note) to John Mardley, although Miller adds a "?" in his Index. These conclusions are based upon Farr's note in his Select Poetry Chiefly Devotional of the Reign of Queen Elizabeth, &c, 1845, vol. i. p. 1., where the signature "M" in the Old Version is thought to represent John Mardley.
A second rendering of The Lamentation is that by Tate and Brady, in the 6th edition of the Supplement of the New Version, 1708. It is the Old Version text rewritten in 9 stanzas of 4 lines. The first stanza reads:—

0 Lord, turn not Thy face from me,
Who lie in woeful state,
Lamenting all my sinful life
Before Thy mercy gate."

This text continued in use as a part of Tate and Brady until that work was superseded by modern hymnbooks. It is also found in a considerable number of the latter, but usually in an abridged form.
A third rendering of The Lamentation, by Bishop R. Heber, was given in his posthumous Hymns, 1827, p. 104, in 12 double lines. The opening lines are:—

"Oh Lord, turn not Thy face away
From them that lowly lie,
Lamenting sore their sinful life
With tears and bitter cry."

This rendering, signed in Heber's Hymns "Sternhold" in error, is given in full in Lord Selborne's Book of Praise, 1862, p. 239. It is considerably altered from the Old Version original. In several modern hymnbooks, including the Scottish Presbyterian Hymnal, 1876, it is slightly altered, as "O Lord, turn not Thy face from us." Other altered forms of the text are (1) "Turn not Thy face away, O Lord," in the American Sabbath Hymn Book, 1858, and others; and (2) "Turn not, O Lord, Thy face from me," in Alford's Psalms & Hymns, 1844, and his Year of Praise, 1867. The original texts of the Old and the New Versions may be found bound up with old copies of the Book of Common Prayer.

All tunes published with 'O Lord, turn not thy face away'^ top 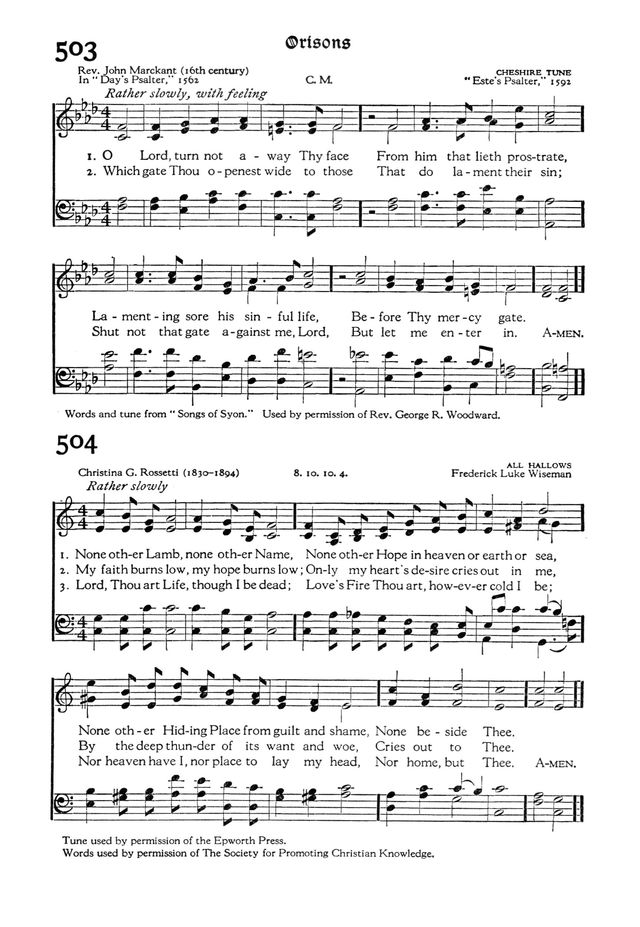 A Liturgy and Hymns for Church Sunday Schools #97

A Selection of Psalms and Hymns for Every Sunday ... Diocese of Quebec #d94

A Selection of Psalms and Hymns for the Use of the Diocese of Nova Scotia. 3rd ed. #d253

A Selection of Psalms, Hymns and Anthems, for every Sunday and principal festival throughout the year. for the use of congregations in the dioceses Quebec and Toronto. #H18

Church Hymns and Tunes for use in Baptist Churches #d393

Hymnal and Liturgies of the Moravian Church #421

Hymns for Public Worship in the Diocese of Fredericton. 2nd ed. #d145

Hymns of the Church Militant #387

Hymns of the Church Universal #236

The Sabbath Hymn and Tune Book #328a

The Sacrifice of Praise. psalms, hymns, and spiritual songs designed for public worship and private devotion, with notes on the origin of hymns. #338

The Service of Song for Baptist Churches #d663