Walk in the Light

The Faithfulness of God

MANOAH was first published in Henry W. Greatorex's Collection of Psalm and Hymn Tunes (1851). This anthology (later editions had alternate titles) contained one of the best tune collections of its era and included thirty-seven original compositions and arrangements by compiler Greatorex as well as melodies by his father, Thomas, and grandfather Anthony. Because no other source has been traced, it is believed that Greatorex composed MANOAH.

The composer gave arbitrary names to his tunes: Manoah was the father of Samson in the Old Testament. This well-crafted common-meter tune features some repetition of melodic motives and a harmonization that invites part singing. Sing in harmony in two long lines rather than four short phrases. Use moderate organ accompaniment at first, but make sure it swells for stanza 4.

Text: How Beautiful the Mystery

Text: I Love the Voice Divine

Text: In Anger, Lord, Rebuke Me Not

Text: I Walk the King's Highway

Text: O Jesus Christ, Grow Thou in Me

Text: Why Did the Nations Join to Slay

Text: Ye Children Come, Give Ear to Me

Text: Behold, Where In A Mortal Form

Text: Hosannah To Our Conquering King

Text: Firm As The Earth Thy Gospel Stands

Text: These Are The Crowns That We Shall Wear

Text: The Sleep Of The Master 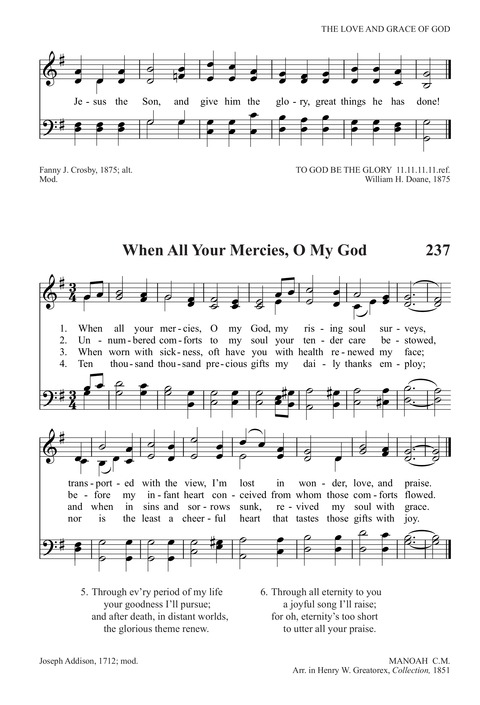 Hymns of the Saints #2

Praise! Our Songs and Hymns #29

The Hymnal for Worship and Celebration #70

The Hymnal for Worship and Celebration #321