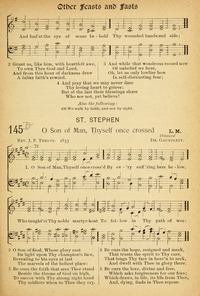 1 O Son of Man, Thyself once crossed
By ev'ry suffering here below,
Who taught'st Thy noble martyr-host
To follow in Thy path of woe:


2 O Son of God, Whose glory cast
Its light upon Thy champion's face,
Revealing to his eye at last
The marvels of the holiest place;


3 Be ours the faith that sees Thee stand
Beside the throne of God on high,
To succor with Thy strong right hand
Thy soldiers when to Thee they cry.


4 Be ours the hope, resigned and meek,
That trusts the spirit to Thy care,
That longs Thy face in heaven to seek,
And dwell with Thee in glory there.


5 Be ours the love, divine and free,
Which asks forgiveness for our foes;
Which draws, in life, its life from Thee,
And, dying, finds in Thee repose.

Thrupp, Joseph. Francis, M.A., son of a solicitor, was born May 20,1827, and educated at Winchester School and Trinity College, Cambridge. At Winchester he gained the Heathcote and Duncan prizes, and the Queen's gold medal for an English poem, and was Head Prefect during his last year. He graduated in 1849 as 7th Wrangler, and 11th in the 1st class of the Classical Tripos. In 1850 he was elected a Fellow of his college. Taking Holy Orders in 1852, he was appointed Vicar of Barrington, Cambridge, in 1852, and Select Preacher before the University in 1865. He was also for some time a member of the Board of Theological Studies, and was associated with the Society for Promoting Christian Knowledge some 20 years. He died at Surbiton, Sept. 24,… Go to person page >
^ top

O Son of Man, Thyself once [crossed] crost. [St. Stephen's Day.] This hymn was given in the Rev. J. F. Thrupp's Psalms & Hymns for Public Worship, 1853, No. 120, in 4 stanzas of 4 lines. In his Index of first lines Mr. Thrupp says that it was "rewritten," but does not give the source of the original. That original is evidently Mrs. C. F. Alexander’s hymn for St. Stephen's Day, "Have you not seen the lily ride," which appeared in her Verses for Holy Seasons, 1846, p. 11, in 10 stanzas of 4 lines; the stanzas chosen being viii., iv., v., ix., x. Thrupp's form of the hymn underwent another change when included in the Society for Promoting Christian Knowledge Church Hymns, 1871, as "O Son of Man, Thyself once crossed,” when the compilers added their stanza ii., "O Son of God, Whose glory cast," and altered Thrupp's stanzas iv, and v. This text of 1871 is also in Thring's Collection, 1882.

Also known as: ST. PHILIPS BENEDICTION GRANTON NAZARETH MELCOMBE was first used as an anonymous chant tune (with figured bass) in the Roman Catholic Mass and was published in 1782 in An Essay on the Church Plain Chant. It was first ascribed to Samuel Webbe (the elder; b. London, England, 1740; d.…

Henry Baker (b. Nuneham, Oxfordshire, England, 1835; d. Wimbledon, England, 1910; not to be confused with Henry W. Baker) was educated as a civil engineer at Winchester and Cooper's Hill and was active in railroad building in India. In 1867 he completed a music degree at Exeter College, Oxford, Engl…

All tunes published with 'O Son of Man, Thyself once crossed'^ top 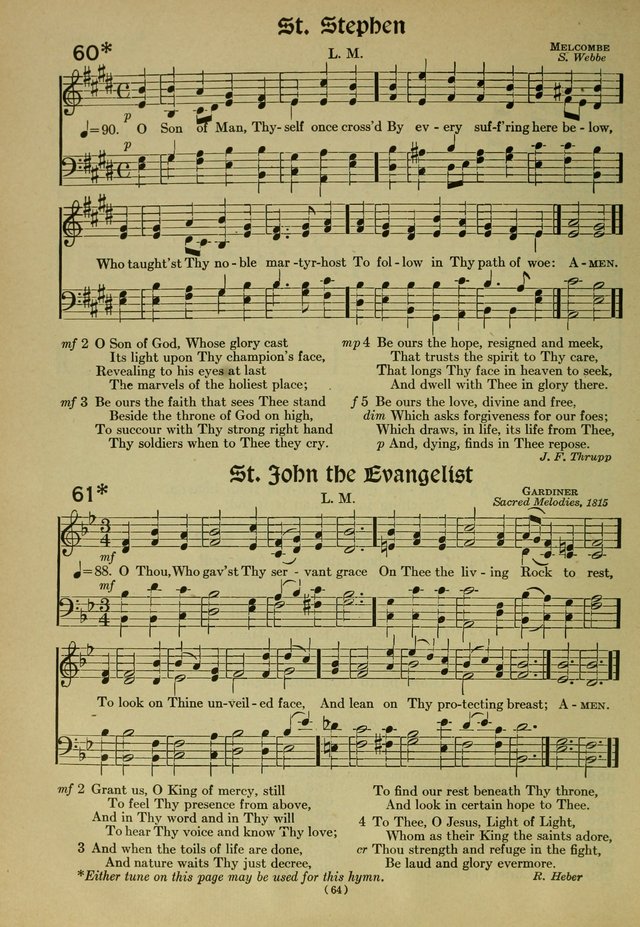 View Page
The Church Hymnal: containing hymns approved and set forth by the general conventions of 1892 and 1916; together with hymns for the use of guilds and brotherhoods, and for special occasions (Rev. ed) (1920), p.65
^ top

The Hymnal, Revised and Enlarged, as adopted by the General Convention of the Protestant Episcopal Church in the United States of America in the year of our Lord 1892 #145