Henry Baker, Mus. Bac., son of the Rev. James Baker, Chancellor of the diocese of Durham; born at Nuneham, Oxfordshire; educated at Winchester School; graduated Bachelor in Music at the University of Oxford in 1867. He also worked as a civil engineer. Scottish Church Music, its composers and sources by James Love; William Blackwwod and Sons, Edinburgh and London, 1891 Go to person page >
^ top

Jesu, Thou joy of loving hearts!

All texts published with QUEBEC ^ top

Henry Baker (b. Nuneham, Oxfordshire, England, 1835; d. Wimbledon, England, 1910; not to be confused with Henry W. Baker) was educated as a civil engineer at Winchester and Cooper's Hill and was active in railroad building in India. In 1867 he completed a music degree at Exeter College, Oxford, England. Baker composed QUEBEC in 1854 when he was a student at Exeter. In 1861 the London Penny Post advertised for a suitable tune for John Keble's text "Sun of My Soul." Baker's tune was among the many that were submitted, but without his knowledge–a friend who had seen QUEBEC shortly after Baker had written it submitted the tune anonymously. QUEBEC was selected and was published in Rev. John Grey's Hymnal for the Use of the English Church (1866). Many of Baker's hymn tunes were published in Garrett Horder's Worship Songs (1905).

A serviceable long-meter tune, QUEBEC proves that a limited soprano range is not a handicap in a well-crafted hymn tune. The tune title's reference to the Canadian city and province is unknown. Also known as HESPERUS, QUEBEC shares similarities with MARYTON (573), PENTECOST (212), and especially ST. CRISPIN (276)–to name just three of the "generic" late-nineteenth-century British hymn tunes. For best results, sing the harmony parts.

Text: Take Up Your Cross

Text: And Dost Thou Say

Text: Father and Friend! Thy Light, Thy Love

Text: Happy the Man That Finds the Grace

Text: Help Us, O Lord, Thy Yoke to Wear

Text: Lord, Guard and Guide the Men Who Fly

Text: My Lord, I Do Not Ask to Stand

Text: Thou, Lord of Life

Text: If Solomon For Wisdom Prayed

Text: Not To Ourselves

Text: His Own Received Him Not 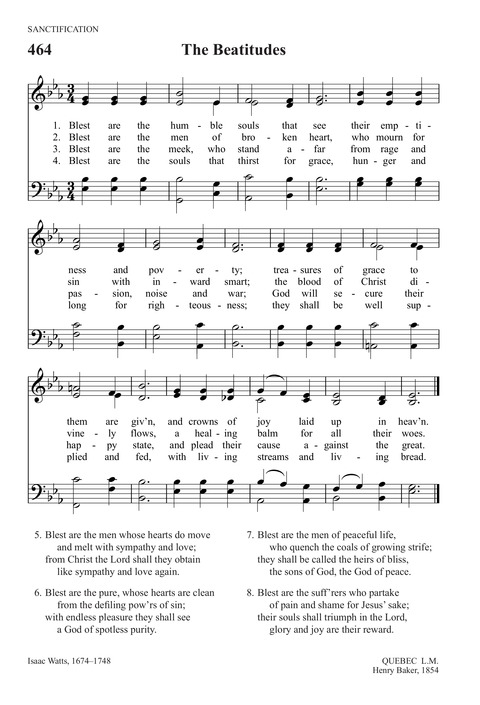 Hymns for a Pilgrim People #312

Hymns of Glory, Songs of Praise #402b

Tune Title: HESPERUS First Line: Not to ourselves, who are but dust Composer: Henry Baker Meter: LM Key: F Major or modal
The Cyber Hymnal #11760

Tune Title: HESPERUS First Line: Surely, if such a thing could be Composer: Henry Baker Meter: LM Key: F Major or modal Source: A Hymnal for Use in the English Church by John Grey, 1866
The Cyber Hymnal #12749

The Hymnal for Worship and Celebration #501

The Irish Presbyterian Hymbook #571b