O God, Our Help in Ages Past

Our God, our help in ages past

1 O God, our help in ages past,
our hope for years to come,
our shelter from the stormy blast,
and our eternal home:


2 Under the shadow of your throne
your saints have dwelt secure;
sufficient is your arm alone,
and our defense is sure.


3 Before the hills in order stood,
or earth received its frame,
from everlasting you are God,
to endless years the same.


4 A thousand ages in your sight
are like an evening gone,
short as the watch that ends the night
before the rising sun.


5 Time, like an ever-rolling stream,
soon bears us all away;
we fly forgotten, as a dream
dies at the op’ning day.


6 O God, our help in ages past,
our hope for years to come,
still be our guard while troubles last,
and our eternal home!

Considered one of the finest paraphrases written by Isaac Watts (PHH 155), "O God, Our Help in Ages Past" expresses a strong note of assurance, promise, and hope in the LORD as recorded in the first part of Psalm 90, even though the entire psalm has a recurring theme of lament. Watts wrote the paraphrase in nine stanzas around 1714 and first published the text in his Psalms of David (1719). The Psalter Hymnal includes the most well-known stanzas. The first line, originally "Our God, our help … ," was changed to "O God, our help… “by John Wesley in his Collection of Psalms and Hymns. (1738). For further commentary on this psalm see PHH 90.

Liturgical Use:
Because it has great stature in the British Commonwealth and virtually serves as a second national anthem, "O God, Our Help in Ages Past" is suitable for various civic occasions in addition to its more common. See also PHH 90.

Our God, our help in ages past. I. Watts. [Ps. xc.] this is the first part of his C.M. rendering of Ps. xc, in 9 stanzas of 4 lines, which appeared in his Psalms of David, &c., 1719, p. 229, and entitled “Man Frail, and God Eternal.” This version of Ps. xc. Has come down to modern collections in the following forms:--
(1) The original, in a few instances in full, but oftener in an abbreviated form of stanzas i., ii., iii., v., vii., and ix.
(2) The altered text by J. Wesley, first published in his Collection of Psalms & Hymns, 1737, where it begins, “O God, our help,” &c. In this text alterations are introduced in stanzas i., ii., vi., and vii. This arrangement in 7 stanzas was included in the Wesleyan Hymn Book, 1780, No. 39, and has been retained in all subsequent editions of that collection. A collation of any hymnal with the original and these changes by J. Wesley, will shew that in nearly every case the stanzas taken are i., ii., iii., v., vii., ix., and the alterations, if any, are by J. Wesley. In Bigg’s Annotated Hymns Ancient &Modern, 1867, a rendering into Latin by C. S. Calverley, 1866, “Auxilium quondam, nunc spes,” is given of the Hymns Ancient & Modern text, which is the original, with J. Wesley’s “O God” for “Our God.”
(3) A curious arrangement of Watts with Tate & Brady was given by Toplady in his Psalms & Hymns, 1776, No. 308, in 10 stanzas of 4 lines. This cento is unknown to modern collections.
(4) In Stowell’s Manchester Collection, 1831, Ps. xc. is composed of stanzas i., ii., from this version by Watts; and iii.-v. by another hand. It is repeated in the 1877 edition by his son. It is a most unequal cento, with a grand opening and a most feeble finish.

Of Watts’s original it would be difficult to write too highly. It is undoubtedly one of his finest compostions, and his best paraphrase. In the commonly accepted form of six stanzas it is seen to the fullest advantage, the omitted portions being unequal to the rest, and impede the otherwise grandly sustained flow of thought. It has been rendered into many languages, and its use is universal. Original text in modern editions of Watts.

All tunes published with 'O God, Our Help in Ages Past'^ top

Isaiah 41:9-10 says, “I took you from the ends of the earth, from its farthest corners I called you. I said, ‘You are my servant’; I have chosen you and have not rejected you. So do not fear, for I am with you; do not be dismayed, for I am your God. I will strengthen you and help you; I will uphold you with my righteous right hand.” No matter our situation, no matter our struggles and fears, no matter doubts, we are told to have courage, for the Lord is our God. And as Isaac Watts writes so powerfully in this hymn, our God is everlasting, and will be our help through all of our years. The first verse gives us every assurance we need: God is our help, our hope, and our home. This does not blithely dismiss our fears and troubles. They are, and always will be, very real. But it does assure us that even if we cannot feel the immediate comfort, or even when all we can do is lament, we have a God that withstands the storms of the life and the tests of time, and who protects us and hears our cries.

This text was written by Isaac Watts in 1714, shortly before the death of Queen Anne of England. This was a time of great crises and turmoil, as the successor of Queen Anne was as yet undetermined, and the fear of a monarch who would reinstate the persecution of Protestants was great. King George I prevented such persecution, but the fear before Anne’s death was great. This was the context in which Watts wrote his powerful text, now lauded as “one of the grandest in the whole realm of English Hymnody” (Bailey, The Gospel in Hymns, 54).

Watts’ text was published in The Psalms of David Imitated, 1719, in nine stanzas. Now, the original first, second, third, fifth, seventh, and ninth stanza are commonly sung. In 1738, John Wesley changed “Our God, our help” to “O God, our help” for Collection of Psalms and Hymns.

ST. ANNE was first published as a setting for Psalm 42, but in 1861, for Hymns Ancient and Modern, it was made a setting for Watts’ text, and the two have been paired together ever since. It is most probably that the tune was composed by William Croft, though there is no documentation that guarantees this. Erick Routley calls this “the most celebrated of all English tunes” (Westermeyer, Let the People Sing, 172). This hymn requires a moderate tempo, a stately manner, and a big sound – whether that be with festive organ, trumpets, or lower octave piano.

As a declaration of trust, an assurance of God’s providence, and a reminder of our own limitations, this hymn can be sung at just about any time in any circumstance. It is particularly fitting for Old/New Year services, for funerals, services of lament/comfort, or celebrations of God’s faithfulness. The Psalter Hymnal Handbook editors write that this hymn “expresses a strong note of assurance, promise, and hope in the LORD as recorded in the first part of Psalm 90, even though the entire psalm has a recurring theme of lament” (PHH).Thus, this hymn is appropriate for celebration, but particularly as an assurance in times of lament or fear, or as a song of our own faith and trust in the face of trials. It is often sung during services of civil memorials, such as Canada’s Remembrance Day or British civic holidays.

With Heart and Voice: songs for all God's children #18 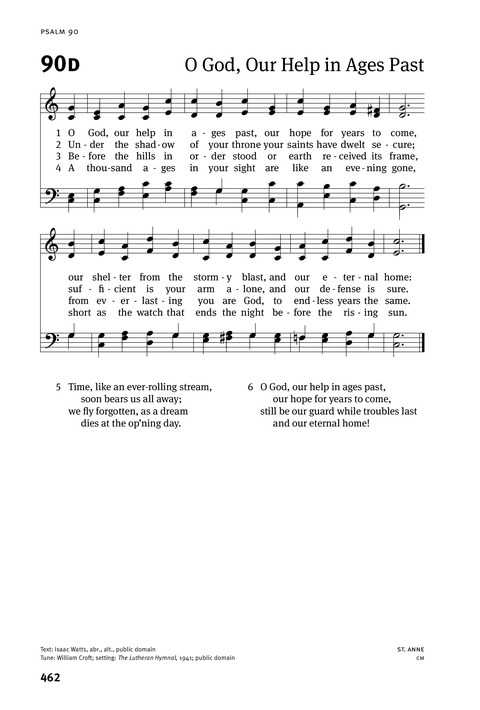 A New Hymnal for Colleges and Schools #205

Great Songs of the Church (Revised) #136

Hymns for a Pilgrim People #1

Hymns of the Christian Life #13

Praise! Our Songs and Hymns #32

Psalms for All Seasons #90B

Rejoice in the Lord #1

The Book of Hymns (A fresh anthology of favourite hymns) #208

The Hymnal for Worship and Celebration #52

The Song Book of the Salvation Army #13

Include 1078 pre-1979 instances
All instances^ top
Suggestions or corrections? Contact us