Out of the deep I cry to Thee, My God, with heart's contrition 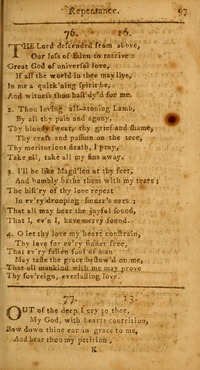 Out of the deep I cry to Thee, My God, with heart's contrition

1 Out of the deep I cry to Thee,
My God, with heart’s contrition;
Bow down Thine ear in grace to me,
And hear Thou my petition;
For if in judgment Thou wilt try
Man’s sin and great iniquity,
Ah, who can stand before Thee.


2 To gain remission of our sin,
No work of ours availeth;
God’s favor we may strive to win,
But all our labor faileth;
We’re ‘midst our fairest actions lost,
And none ‘fore Him of aught can boast.
We live alone through mercy.


3 Therefore my hope is in His grace
And not in my own merit;
On Him my confidence I place,
Instructed by His Spirit;
His precious Word hath promised me
He will my Joy and Comfort be;
Thereon is my reliance.


4 Though sin with us much abound,
Yet grace still more aboundeth;
Sufficient help in Christ is found,
Where sin most deeply woundeth.
He the good Shepherd is indeed,
Who His lost sheep doth seek and lead
With tender love and pity.

Source: Hymnal and Liturgies of the Moravian Church #317

La Trobe, Benjamin, was born in Dublin, April 19, 1725, and educated at the University of Glasgow. He entered the Ministry of the Moravians, and subsequently became superintendent of that body in England. He died Nov. 29, 1786. Several of his translation of German hymns appeared in the Moravian Hymn Book, 1789. [George Arthur Crawford, M.A.] --John Julian, Dictionary of Hymnology (1907)  Go to person page >

Aus tiefer Woth schrei ich zu dir. Martin Luther. [Ps. cxxx.] This beautiful, though free, version of Ps. cxxx. was written in 1523. Ps. cxxx. was a great favourite with Luther, one of those he called Pauline Psalms —the others being Ps. xxxii., li., and cxliii. With its versification he took special pains, and the final result ranks with the finest of German Psalm versions. It first appeared in 4 stanzas of 7 lines in Etlich cristlich lider, Wittenberg, 1524, and in Eyn Enchiridion, Erfurt, 1524. The form now in use considerably altered, and with stanza ii. rewritten as ii., iii., appeared in the Geystliche gesangk Buchleyn, Wittenberg, 1524, in 5 stanzas was included as No. 1 in Luther's Christliche Geseng zum Begrebnis, Wittenberg, 1542, and since in almost all German hymn-books, as recently in the Unverfälschter Liedersegen, 1851, No. 362. Both forms are included in Wackernagel’s D. Kirchenlied, iii. pp. 7-8, and in Schircks's ed. of Luther's Geistliche Lieder, 1854, pp. 66-68.
The fine melody (in the Irish Church Hymnal called De profundis; elsewhere, Luther's 130th, &c.) is possibly by Luther, and first appeared, with the 5 stanza form, in 1524.
The hymn was sung, May 9, 1525, at the funeral of the Elector Friedrich the Wise in the Court church at Wittenberg; by the weeping multitude at Halle when, on Feb. 20, 1546, Luther's body was being taken to its last resting-place at Wittenberg; and again as the last hymn in the Cathedral at Strasburg before the city was captured by the French in 1681. Stanza v. comforted the last hours of Christian, Elector of Saxony, 1591, of Johann Georg L, Elector of Saxony, 1656, and of King Friedrich I. of Prussia, 1723 (Koch, viii. 211-216).
Translations in common use:—
1. Out of the deep I cry to Thee, My. A free translation of stanzas i.-iii., v., by B. Latrobe, as No. 231 in the Moravian Hymn Book, 1789 (1849, No. 287). In 1848, it was given, slightly altered from the edition of 1826, and beginning "Out of the depths I cry to Thee, Lord, look," as No. 4 in the Dalston Hospital Hymn Book. The text of 1826, unaltered save stanza ii., 11. 3-4, was included as No. 440 in the Irish Church Hymnal, 1873.

All tunes published with 'Out of the deep I cry to Thee, My God, with heart's contrition'^ top 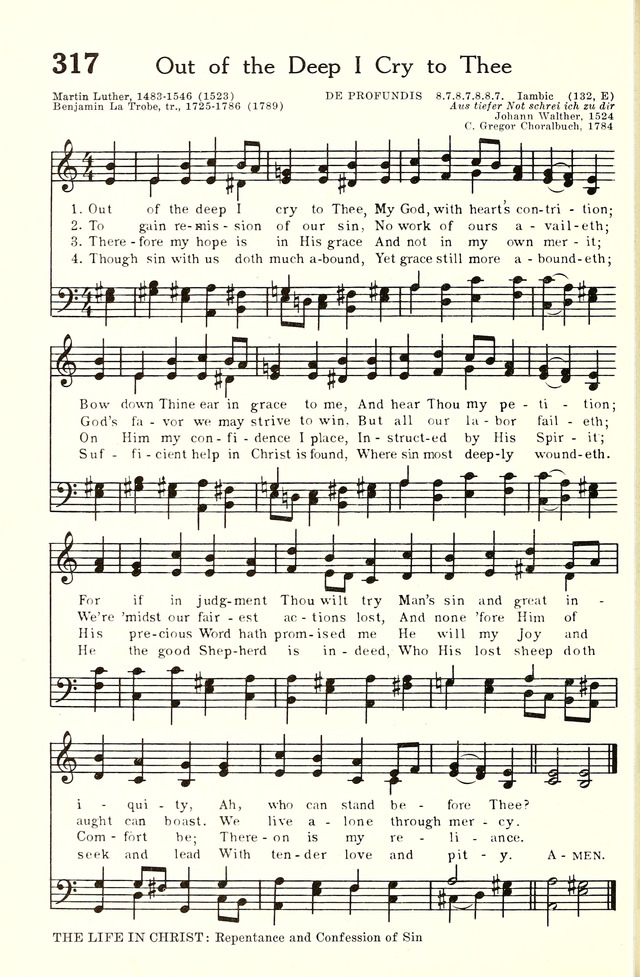 A Collection of Hymns for the Use of the Protestant Church of the United Brethren. (New and Rev. ed.) #251

A Collection of Hymns for the Use of the Protestant Church of the United Brethren. Rev. ed. #d599

A Collection of Hymns, for the Use of the Protestant Church of the United Brethren. New and Revised ed. #289

Hymnal and Liturgies of the Moravian Church #317

Hymnal and Liturgies of the Moravian Church #413

Offices of Worship and Hymns #742

The Liturgy and the Offices of Worship and Hymns of the American Province of the Unitas Fratrum, or the Moravian Church #742