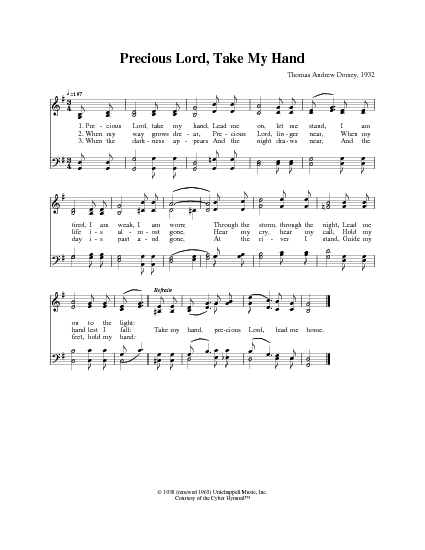 Audio files: MIDI, Recording
Representative text cannot be shown for this hymn due to copyright. 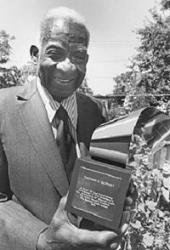 Thomas Andrew Dorsey was born in Villa Rica, a small rural town near Atlanta, Georgia. In 1919 he moved to Chicago. Most of his musical training was in the church, but he also studied and played jazz and blues. He later combined jazz and blues with religious texts, giving birth to gospel music. In 1931, along with Magnolia Lewis-Butts and Theodore Roosevelt Frye, he established the first gospel choir at Ebenezer Baptist Church in Chicago. He went on to lead the gospel choir at Pilgrim Baptist Church, which he led for 60 years. Dorsey was also instrumental in founding the National Convention of Gospel Choirs and Choruses (NCGCC) in 1933. The convention taught choirs all over the country how to sing gospel music. Dianne Shapiro, from "Gosp… Go to person page >
^ top

In 1932, a week after the death of his wife in childbirth and the subsequent death of his newborn son, Thomas Andrew Dorsey (b. Villa Rica, GA, 1899; d. Chicago, IL, 1993) wrote this text. He also arranged the George N. Allen tune PRECIOUS LORD to match his text. Dorsey is, considered the "father" of the African American gospel tradition (in distinction from the spiritual tradition) and was an active writer in this style from the 1920s through the 1950s. "Precious Lord" is the most popular of the early group of gospel songs that arose in the United States. Martin Luther King, Jr., chose the hymn as one of the "freedom anthems" of the Civil Rights Movement; since that time it has been included in many hymnals.

Given the circumstances surrounding Dorsey's writing of this text, it is not surprising that it has the character of the Old Testament lament psalms: we confess our own helplessness (st. 1), and we utter a cry for divine help (st. 2), but even in the face of death we are confident of God's saving power (st. 3).

Born into a Baptist preacher's family, Dorsey moved to Atlanta when he was five. There he studied music and came under the influence of local blues pianists. He moved to Chicago in 1915, where he studied at the Chicago College of Composition and Arranging and played in nightclubs as "Georgia Tom" or "Barrelhouse Tom," accompanying blues singers such as Tampa Red, Ma Rainey, and Bessie Smith. Because of his skill as composer, arranger, and pianist, he was in great demand. He also formed his own band, Wildcat's Jazz Band. After suffering from a severe illness in 1926, Dorsey became more involved with the Pilgrim Baptist Church and in 1932 began a forty-year tenure as the church's choral director. He wrote at least two hundred gospel songs (his total works number more than a thousand), organized and was president of the National Convention of Gospel Choirs and Choruses, and frequently directed other ensembles, including the Gospel Choral Union. His gospel songs were popularized by singers such as Mahalia Jackson, Roberta Martin, and Clara Ward.

Liturgical Use:
Similar to uses for Old Testament lament psalms: times of personal tragedy, communal disasters, international conflicts; services in which Christians want to express solidarity with the oppressed and those who experience "the valley of the shadow of death."

All tunes published with 'Precious Lord, Take My Hand'^ top

Hymns for a Pilgrim People #434

Sacred Selections for the Church #62

The Hymnal for Worship and Celebration #463