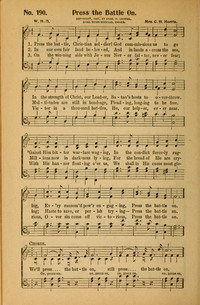 1 Press the battle, Christian soldier!
God commissions us to go
In the strength of Christ, our Leader,
Satan’s hosts to overthrow.
‘Gainst Him bitter warfare waging,
In the conflict fiercely raging,
Ev’ry ransom’d pow’r engaging,
Press the battle on.


2 In our own fair land beloved,
And in lands across the sea,
Multitudes are still in bondage,
Pleading, longing to be free.
Millions now in darkness lying,
For the bread of life are crying;
Haste to save, or perish trying—
Press the battle on. [Refrain]


3 On the winning side with Jesus
Never falter, never fear;
Victor in a thousand battles,
He our helper, ever near.
With His banner floating o’er us,
We shall in His cause most glorious,
Over sin come off victorious,
Press the battle on. [Refrain] 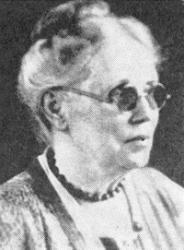 Lelia (Mrs. C.H.) Morris (1862-1929) was born in Pennsville, Morgan County, Ohio. When her family moved to Malta on the Muskingum River she and her sister and mother had a millinery shop in McConnelsville. She and her husband Charles H. Morris were active in the Methodist Episcopal Church and at the camp meetings in Sebring and Mt. Vernon. She wrote hymns as she did her housework. Although she became blind at age 52 she continued to write hymns on a 28-foot long blackboard that her family had built for her. She is said to have written 1000 texts and many tunes including "Sweeter as the years go by." Mary Louise VanDyke Go to person page >
^ top

All tunes published with 'Press the battle Christian soldier'^ top 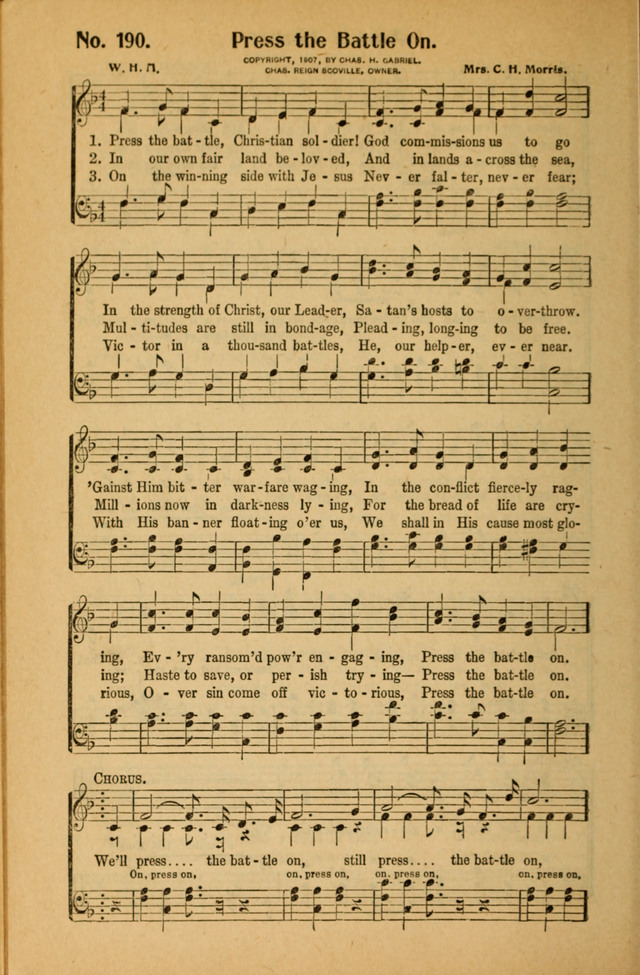