Lobwasser, Ambrosius, son of Fabian Lobwasser, inspector of mines at Schneeberg, Saxony, was born at Schneeberg, April 4, 1515. After studying law at Leipzig (M.A. 1535) he remained there as University tutor until 1550. After acting as travelling tutor, he was appointed in 1557 Rath and Chancellor at Meissen, and in 1562 made a tour in Italy, and received the degree of LL.D. from the University of Bologna. He was finally appointed in 1563 by Duke Albrecht of Prussia as professor of law and assessor at the High Court of Justice at Königsberg. He died at Königsberg Nov. 27, 1585 (Koch, ii. 394-401, &c). His principal poetical work was his version of the Psalter. One has passed into English in recent times, viz: Ihr Knecht des Herren all… Go to person page > 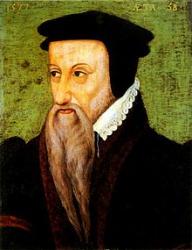 Bèze, Théodore de, born at Vezelay, in Burgundy, 1519; died 1605. Bèze’s father was of noble birth. He occupied the post of bailiff at Vezelay. Bèza received a first-rate classical education under Melchior Wolmar. Before he was 20 he wrote some poetry in imitation of Catullus and Ovid, the licentiousness of which he mourned and condemned in alter years. A brilliant prospect of Church emoluments turned his attention from the distasteful study of law. The income of the Priory of Longjumeau made him rich, and he became a prominent member of the literary world at Paris. But his entrance into Orders was barred by a secret marriage with Claudine Denosse. Subsequently, when the offer of the abbey of Froidmont by his uncle made it necessary f… Go to person page > 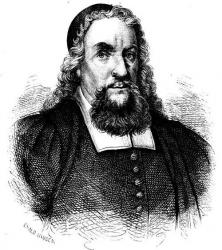