Shout, For The Blessed Jesus Reigns

Shout for the blessed Jesus reigns

1 Shout, for the blessed Jesus reigns;
through distant lands his triumphs spread;
and sinners, freed from endless pains,
own him their Savior and their Head.


2 He calls his chosen from afar;
they all at Zion's gates arrive;
those who were dead in sin before
by sov'reign grace are made alive.


3 Gentiles and Jews his laws obey;
nations remote their off'rings bring,
and unconstrained their homage pay
to their exalted God and King.


4 O may his holy church increase,
his Word and Spirit still prevail,
while angels celebrate his praise,
and saints his growing glories hail.


5 Loud hallelujahs to the Lamb,
from all below and all above!
In lofty songs exalt his name,
in songs as lasting as his love.

The text "shouts" the cosmic reign of Christ over all nations, a reign that is joyfully confessed by his chosen people on earth and celebrated by saints and angels in heaven. In the midst of these powerful exclamations of praise to Christ the Lamb comes a prayer for the increase of the church (st. 4). This is presumably one of the earliest "church growth" hymns!

Beddome originally pursued a medical degree and was apprenticed to a surgeon. However, after his conversion at age twenty, he became pastor of the Baptist congrega¬tion at Bourton-on-the-Water in Gloucestershire, where he remained until his death. (The following story is told about Beddome: When he received a caller from London asking him to accept a call from a much more prestigious church, one of his parishioners went to the parsonage, confronted the London caller with the line "robbers of churches are the worst sort of robbers," and turned loose the man's horse!) Beddome wrote more than eight hundred hymn texts, many of which were composed to be sung by his congregation after the morning sermon.

Liturgical Use:
A fine hymn of praise or doxology for general use; fitting for church festivals like Worldwide Communion and All Nations Sunday; during Epiphany.

All tunes published with 'Shout, For The Blessed Jesus Reigns'^ top 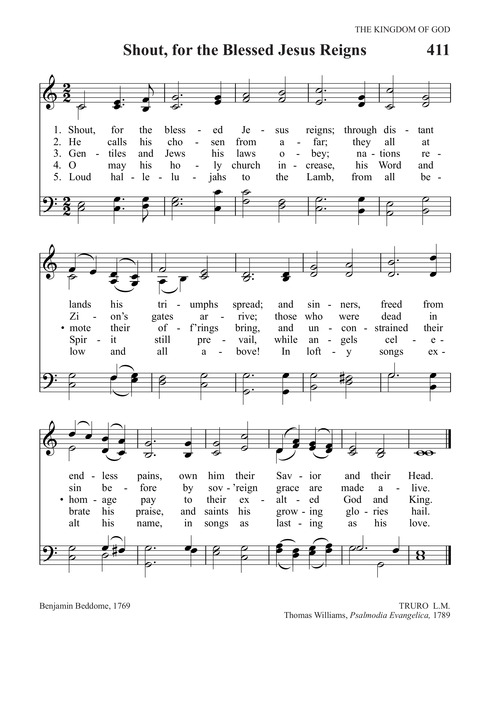