Sing Alleluia forth in duteous praise 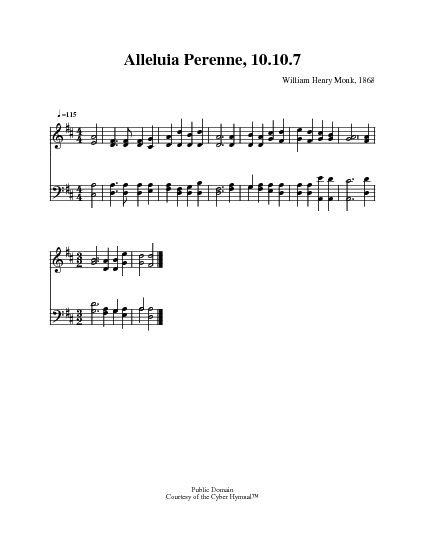 Sing Alleluia forth in duteous praise

1 Sing Alleluia forth in duteous praise,
O citizens of heaven, and sweetly raise
An endless Alleluia.


2 Ye next, who stand before th' Eternal light,
In hymning choirs re-echo to the Height
An endless Alleluia.


3 The Holy City shall take up your strain,
And with glad songs resounding wake again
An endless Alleluia.


4 In blissful antiphons ye thus rejoice
To render to the Lord with thankful voice
An endless Alleluia.


5 Ye who have gained at length your palms in bliss,
Victorious ones, your chant shall still be this,
An endless Alleluia.


6 There, in one grand acclaim for ever ring
The strains which tell the honour of your King,
An endless Alleluia.


7 This is the rest for weary ones brought back;
This is glad food and drink which none shall lack,--
An endless Alleluia.


8 While Thee, by whom were all things made, we praise
For ever, and tell out in sweetest lays
An endless Alleluia.


9 Almighty Christ, to Thee our voices sing
Glory for evermore; to Thee we bring
An endless Alleluia.

Alleluia piis edite laudibus. This anonymous hymn, Mone, 1853, i. p. 87, assigns to the 5th century, on the ground that it was included in the Mozarabic Breviary, in which no hymns were admitted which arc of later date than the 8th century, and that the shortened strophe indicated that date. He gives the text from a Munich manuscript of the 10th century, and adds numerous readings and a few notes.
The text is also in the Hymnarium Sarisburiense, London, 1851, pp. 60,61, where it is given as the hymn at Matins on Septuagesima Sunday and through the week, and as from a manuscript (date 1064), formerly belonging to Worcester Cathedral; which manuscript professes to contain Ambrosian Hymns for the different Hours, according to the Constitutions of our Father Benedict, and to have St. Oswald as its compiler. [Rev. W. A. Shoults, M. A.]

Translations in common use:—
3. Sing Alleluia forth in duteous praise. By J. Ellerton. First published, with an explanatory and historical note, in The Churchman's Family Magazine, 1865. In 1868 it was embodied in the Rev. R. Brown-Borthwick's Supplemental Hymn and Tune Book, and again, after revision by the translator, in the Appendix to Hymns Ancient & Modern the same year. It was revised a second time for Church Hymns, 1871, and has also been printed elsewhere with the alteration of a word or two, but usually with the translator's consent. Original translation as above; authorised translation in Church Hymns Since its publication in Hymns Ancient & Modern, 1868, it has been included in almost every hymnal of note in Great Britain, and most English-speaking countries. It is the most vigorous, musical, and popular rendering of the "Alleluia piis edite" which we possess.

All tunes published with 'Sing Alleluia forth in duteous praise'^ top 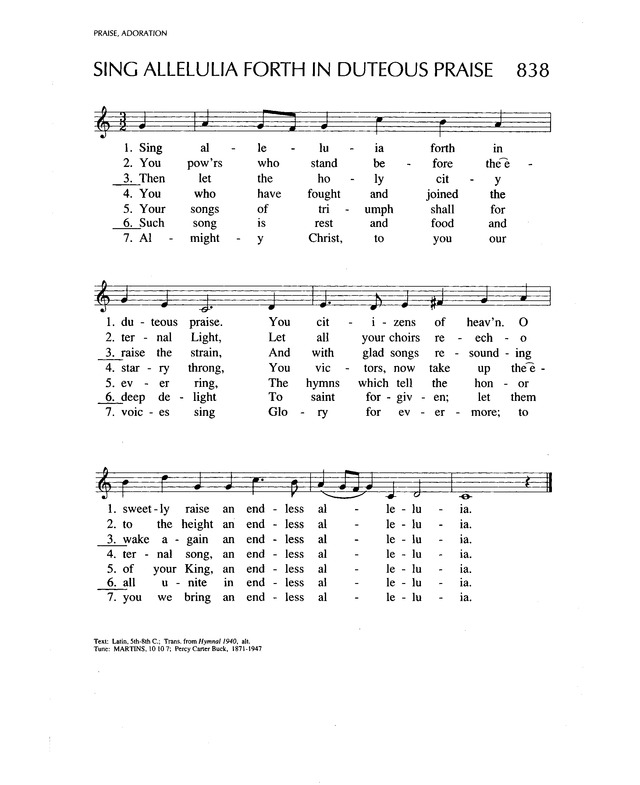