Thanks to God Whose Word Was Spoken

Thanks to God whose word was spoken

Reginald T. Brooks (b. Wandsworth, London, England, 1918; d. London, 1985) wrote this hymn in 1954 for the 150th anniversary of the British and Foreign Bible Society; it was first published in the 1964 Methodist Hymnal. The text has been altered for publication in the Psalter Hymnal. More comprehensive than the similar text at 277, Brooks's hymn helps us offer thanks to God for the various ways in which the Word comes to us: through creation (st. 1); through Christ, the incarnate Word (st. 2); through the Bible, God's written Word, published in many languages (st. 3-4); and through the Holy Spirit, who speaks to us within (st. 5).

Brooks was an ordained minister in the United Reformed Church in England and served as a radio and television producer for the Religious Broadcasting Department of the BBC. Always known as R. T. Brooks, he was educated at the London School of Economics and studied theology at Mansfield College, Oxford, England.

Liturgical Use:
The entire song is suitable for festive use at high points in the church year and for special events such as ordination, profession of faith, missions, Reformation, and more. Stanzas 1 through 3 (and perhaps 4) are suitable before the sermon, and stanza 5 is a fitting post-sermon response.

John Goss (PHH 164) composed LAUDA ANIMA (Latin for the opening words of Psalm 103) for this text in 1868. Along with his original harmonizations, intended to interpret the different stanzas, the tune was also included in the appendix to Robert Brown¬ Borthwick's Supplemental Hymn and Tune Book (18… 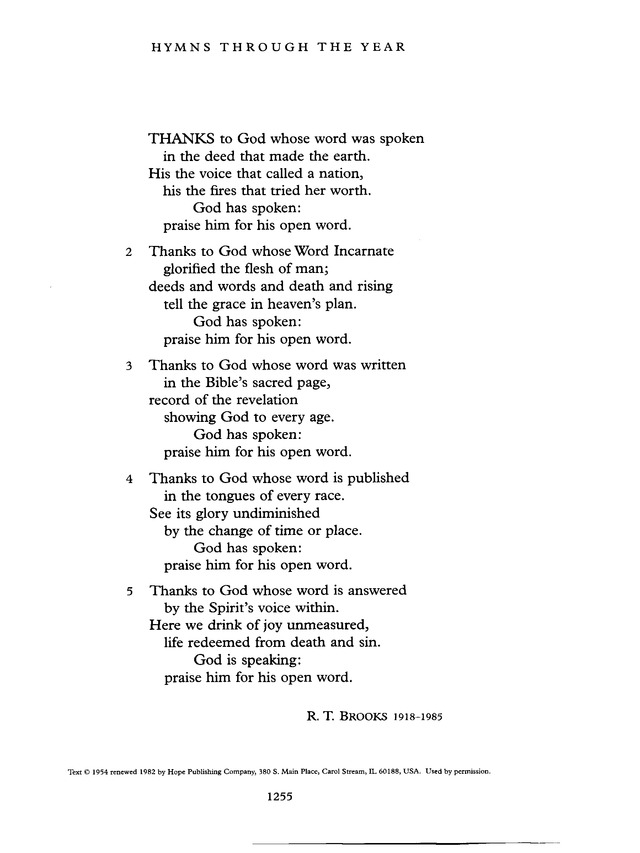