Break Thou the Bread of Life

Break thou the bread of life

Author: Mary A. Lathbury (1877)
Tune: [Break thou the bread of life] (Sherwin)
Songs of Illumination
Published in 687 hymnals

1 Break now the bread of life, dear Lord, to me,
as once you broke the loaves beside the sea.
Beyond the sacred page I seek you, Lord;
my spirit waits for you, O living Word.


2 Bless your own word of truth, dear Lord, to me,
as when you blessed the bread by Galilee.
Then shall all bondage cease, all fetters fall;
and I shall find my peace, my All in all!


3 You are the bread of life, dear Lord, to me,
your holy word the truth that rescues me.
Give me to eat and live with you above;
teach me to love your truth, for you are love.


4 O send your Spirit now, dear Lord, to me,
that he may touch my eyes and make me see.
Show me the truth made plain within your Word,
for in your book revealed I see you, Lord. 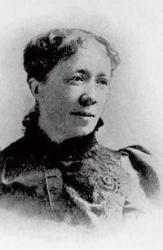 Lathbury, Mary Ann, was born in Manchester, Ontario County, New York, Aug. 10, 1841. Miss Lathbury writes somewhat extensively for the American religious periodical press, and is well and favourably known (see the Century Magazine, Jan., 1885, p. 342). Of her hymns which have come into common use we have:— 1. Break Thou the bread of life. Communion with God. A "Study Song" for the Chautauqua Literary and Scientific Circle, written in the summer of 1880. It is in Horder's (Eng.) Congregational Hymns, 1884. 2. Day is dying in the west. Evening. "Written at the request of the Rev. John H. Vincent, D.D., in the summer of 1880. It was a "Vesper Song," and has been frequently used in the responsive services of the Chautauqua Literary and Sc… Go to person page >
^ top

Mary A. Lathbury (b. Manchester, NY, 1841; d. East Orange, 1913) is known primarily for two hymns: this one (originally "Break Thou the Bread of Life") and "Day Is Dying in the West." She wrote both at the request of Bishop John H. Vincent for use in the services of the Chautauqua Assembly, well-known in the late nineteenth and early twentieth centuries as a conference center that offered a rich fare of Bible study, Sunday school teaching methods, concerts, and plays. Vincent, the secretary of the Methodist Sunday School Union, founded the Chautauqua Institution on Chautauqua Lake in upper New York State in an effort to educate Sunday school teachers. An assistant to Vincent at the camp, Lathbury was also a well-known writer, editor, and illustrator of children's books. Her literary skills earned her the nickname "Poet Laureate of Chautauqua."

Lathbury wrote stanzas 1 and 2 in 1877; they were first published in Chautauqua Carols (1878). Alexander Groves (b. Newport, Isle of Wight, England, 1842; d. Henleyon-Thames, Oxfordshire, England, 1909) added stanzas 3 and 4 later, and they were first published in the Wesleyan Methodist Magazine (London, Sept. 1913). Groves's career included being a grocer and accountant as well as a trustee, auditor, and actuary for the Henley Savings Bank. He served as organist of the Henley Wesleyan Chapel but later in life became a member of the Anglican Church in Henley.

Some expressions in "Break Now the Bread of Life" may not satisfy everyone in the Reformed community, but these verses were not written to define doctrine in sharp detail. They were intended to be used as a simple prayer for illumination for Bible study groups and in the meetings of the Chautauqua Literary and Scientific Circle. Tradition also calls for the hymn's use during Sunday-evening vespers at the Lake Chautauqua' assembly grounds.

The hymn text draws on biblical images to depict Scripture's role in our lives. Stanzas 1 and 2 recall the breaking and the blessing of the bread at Jesus' feeding of the five thousand. Stanza 3 confesses Christ as the bread of life. Stanza 4 calls for the Spirit's presence and alludes to Christ's healings of various blind people.

Liturgical Use:
A simple prayer for illumination; vespers. (Though it uses the "bread of life" image, this is not ordinarily a hymn for the Lord's Supper.)

[Break thou the bread of life] (Sherwin)

William F. Sherwin (PHH 8) composed BREAD OF LIFE in 1877 for the stanzas by Lathbury when he was the music director for the Chautauqua Institution. A good fit for the hymn text, BREAD OF LIFE is a quiet tune, meditative in tone but with a fine climax in its final phrase. Sing this tune in harmony a…

All tunes published with 'Break Thou the Bread of Life'^ top

This hymn has served as both a comfort and inspiration to many people since its first publication. Before every mid-week service, the great English preacher G. Campbell Morgan would read the words to this hymn to help him focus on his message. The primary focus of this hymn is centered upon Bible study and the desire to glean truth from God’s word.

The words to this hymn were authored by Mary Lathbury, who often wrote hymns to accompany various parts of the Bible. Eventually known as the “Poet of Chautauqua,” Lathbury was seen as a kind and gentle Christian soul whose creativity was immense. “Break Now the Bread of Life,” is one of her two most widely known hymns. Many have been misled in thinking that this hymn is a reference to the Lord’s Supper, when it is actually centered upon studying God’s word. This hymn can be seen in reference to John 6:35 which reads, “And Jesus said unto them, I am the bread of life: he that cometh to me shall never hunger; and he that believeth in me shall never thirst.” In some hymnals, the third and fourth stanzas are omitted and the text is modernized.

The tune most commonly sung for this hymn is BREAD OF LIFE, specifically written for the text by William F. Sherwin in 1877. The notes are both gentle and reassuring, complimenting Mary Lathbury’s lyrics, and allowing the singer to focus on each word of the hymn. It is a slow, flowing tune, but uplifting nonetheless.

This hymn works well throughout the course of the year, especially on Sundays of contemplation and right before scripture readings. This hymn is not ordinarily used for the Lord’s Supper. This hymn should be sung in harmony at a firm tempo.

Suggested music for this hymn: 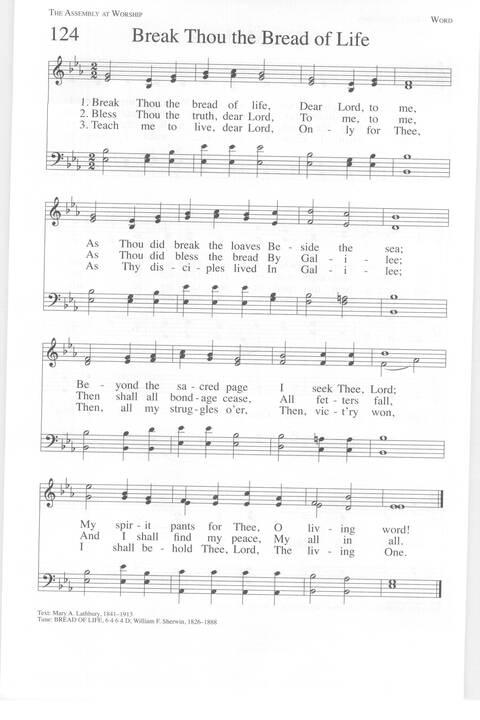 Great Songs of the Church (Revised) #312

Hymns for a Pilgrim People #250

Hymns of the Christian Life #411

Sacred Selections for the Church #51

The Hymnal for Worship and Celebration #274

The Song Book of the Salvation Army #650