That Easter Day with Joy Was Bright

That Easter day with joy was bright

1 That Easter day with joy was bright:
the sun shone out with fairer light
when to their longing eyes restored,
th'apostles saw their risen Lord.


2 His risen flesh with radiance glowed,
his wounded hands and feet he showed;
those scars their solemn witness gave
that Christ was risen from the grave.


3 O Jesus, King of gentleness,
do thou thyself our hearts possess,
that we may give thee all our days
the willing tribute of our praise.


4 O Lord of all, with us abide
in this, our joyful Easter-tide;
from ev'ry weapon death can wield
thine own redeemed forever shield.

Aurora lucis rutilat. [Easter.] This hymn is ascribed to St. Ambrose, but was not received among his undoubted works by the Benedictine editors. In rendering the hymn into English some translators have given the text in full, whilst others have taken a part only.
This translation by Dr. Neale, in two parts, was published in the Hymnal Noted, in 1852, and continued in later editions. Pt. i. consists of lines 1-20, and 4 lines, and a doxology not in the original, but in the Sarum Breviary, pt. ii. of lines 21-44, and the closing lines of pt. i. repeated.
In 1861, the Compilers of Hymns Ancient & Modern gave this rendering in that collection with rather extensive alterations, and rearranged in three parts, thus:— 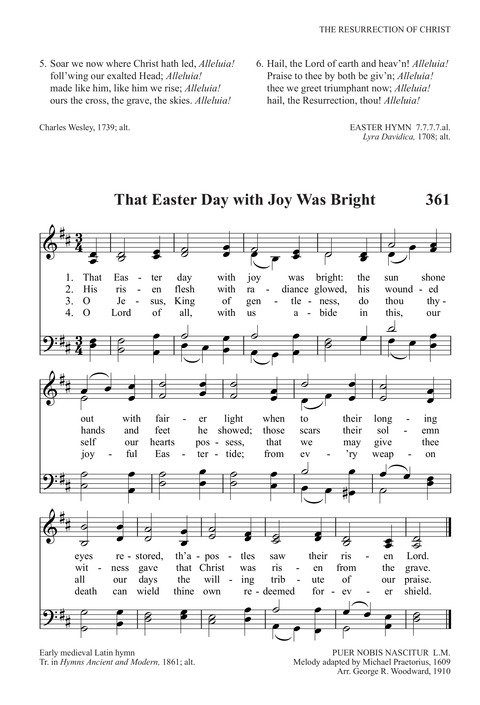