The City Is Alive, O God

The city is alive, O God

Audio files: MIDI, Recording
Representative text cannot be shown for this hymn due to copyright.
To see the text, purchase a flexscore.
See page scan previews below.

William W. Reid, Jr. (1923-2007), after graduating from Oberlin College and Seminary and Yale Divinity School served for more than fifty years as pastor in the Wyoming Conference in rural and inner-city Methodist churches. He served on the Executive Committee of The Hymn Society of America. He was involved in social issues, serving as a councilman and county commissioner. His hymns are widely published in hymnals of many denominations. Mary Louise VanDyke… Go to person page >
^ top

Ideas about the mission of the church have gone through many changes in the twentieth century. Thus the Hymn Society of America conducted a search in 1968 for new hymns about the task of the church in the world. The Society chose this hymn by William W. Reid, Jr. (b New York, NY, 1923), as one of the best texts from the more than eight hundred' submissions. It was published in the Hymn Society pamphlet, Nine New Hymns on "The Mission of the Church" (1969).

In Isaiah 61: 1-3 the prophet foretells the coming of the Messiah, who will "preach good news to the poor … bind up the brokenhearted, proclaim freedom for the captives… and comfort those who mourn." This text takes that view of Christ's ministry and applies it to Christian service in the urban context. The major cities of the world are fascinating places, but they also contain "loneliness and greed and hate," and "crime and slums and lust abound." Just as Christ ministered "through healing touch, through word and cross," so must the church minister the gospel in word and deed throughout the whole world, but especially in the cities. "The City Is Alive" encourages us to be servants in those urban centers, to give Christian hope to the world, and to offer a new song of shalom to its citizens.

Reid was a Methodist minister serving congregations in Camptown, Pennsylvania (1950-1957); Carverton (near Wyoming), Pennsylvania (1957-1967); and the Central United Methodist Church in Wilkes-Barre, Pennsylvania (1967-1978), where he wrote this text. In 1978 he was appointed superintendent of the Wilkes-Barre district of the Methodist Church. Reid received his education at Oberlin College in Ohio, where he concentrated in botany. He served in the United States Army Medical Corps during World War II and survived imprisonment in a German prison camp. The recipient of a divinity degree from the Yale Divinity School, Reid was inspired to write hymns by his father, the founder and first executive secretary of the Hymn Society. A number of Reid's hymns were published in pamphlets issued by the Hymn Society in 1955, 1958, and 1959.

Liturgical Use:
Worship that focuses on the variety of Christian ministries carried out in the world, especially in its cities.

STAR OF THE COUNTY DOWN

Eric H. Thiman (b. Ashford, Kent, England, 1900; d. Camden, London, England, 1975) composed STOKESAY CASTLE in 1923 as a setting for "Stand Up, Stand Up for Jesus." The tune was published with a variety of other texts in the British Congregational Praise (1951) and in the Canadian Anglican and Unite…

All tunes published with 'The City Is Alive, O God'^ top 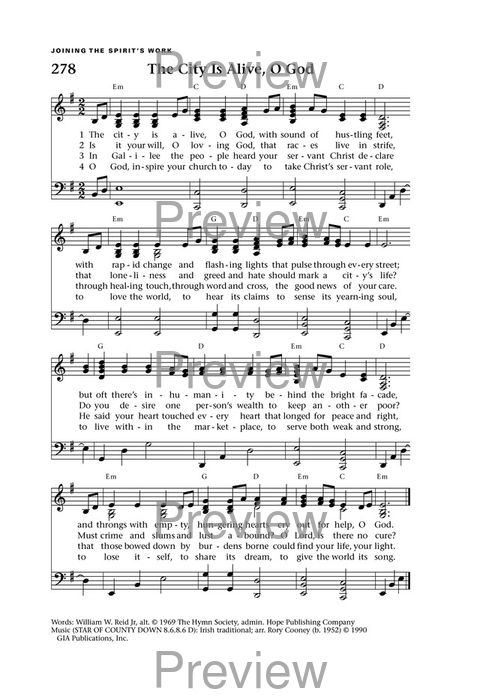