The Eternal Gifts of Christ the King 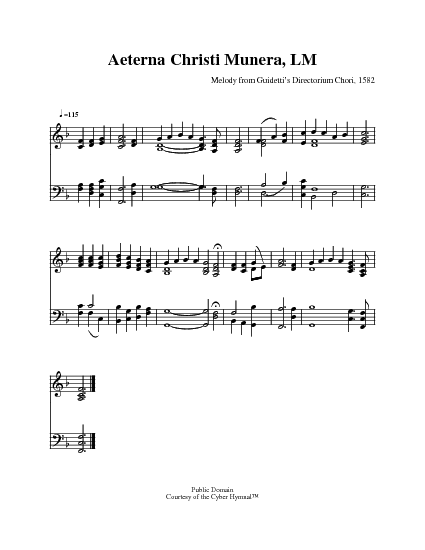 The eternal gifts of Christ the King, The Apostle's glory let us sing

1 Th'eternal gifts of Christ the King,
th'apostles' glory, let us sing;
and all, with hearts of gladness, raise
due hymns of thankful love and praise.


2 Theirs is the steadfast faith of saints,
and hope that never yields nor faints,
and love of Christ in perfect glow
that lays the prince of this world low.


3 In them the Father's glory shone,
in them the will of God the Son,
in them exults the Holy Ghost,
through them rejoice the heav'nly host.


4 To thee, Redeemer, now we cry,
that thou wouldst join to them on high
thy servants, who this grace implore,
for ever and for evermore.

Aeterna Christi munera, Et martyrum victorias. Ambrosian. This hymn, originally written for "Martyrs," has been adapted for Apostles," and (in another form) for "Martyrs" in the Roman Breviary ....This hymn is received by the Benedictine editors of St. Ambrose as a genuine work of that Father, on the authority of the Ven. Bede; who, in his work, De arte metricâ, speaks of it as a "hymn for blessed martyrs, composed with most beautiful grace," "pulcherrimo est decore compositus hymnus beatorum martyrum." (See the Benedictine edition of St. Ambrose, in Migne's Patrol, tom. 16.) Mone, No. 733, in his note on the hymn, says, "Vezzosi remarks justly that the congregation of St. Maur [i.e. the Benedictine editors] ascribed this hymn on an obscure reference of Bede to Stanzas Ambrose, whose it is not, though it is yet most likely of the 5th century."
Amongst the earliest manuscripts in which it is found are two of the 11th century, in the British Museum (Harl. 2961, f. 248; Jul. A. vi. f. 646), and another, perhaps of the 8th or 9th century, formerly belonging to that eminent scholar in the Anglo-Saxon and cognate languages, Franciscus Junius. The latter was No. 110 among the manuscripts bequeathed to the Bodleian by Fr. Junius at his death in 1677, but "has been missing from the Library for more than 100 years." [F. Madan, Sub-Librarian, Bodl. Lib. Aug. 21, 1884.]
It should be added that in some Monastic Breviaries this hymn has been adapted to Festivals of Confessors and Virgins. [Rev. W. A. Shoults, B. D.]
Translations in common use:—
1. The eternal gifts of Christ the King, The Martyrs' glorious deeds we sing. By J. M. Neale, published in the enlarged edition of the Hymnal Noted, 1854, No. 80, in 5 stanzas of 4 lines, and from thence into one or two collections, including the Hymner, 1882, No. 94. It is from the York Breviary, and consists of stanzas i., iii., iv., v. and viii. of the original.
2. The eternal gifts of Christ our King, The Martyrs' victories let us sing. By J. D. Chambers, from the York Breviary, first published in his Lauda Syon, Pt. ii., 1866, p. 15, in 5 stanzas of 4 lines. In the People's Hymnal, 1867, No. 211, it is given unaltered. In the Hymnary, 1872, No. 399, a mixed translation from Neale, Chambers, and others, is given, and is wrongly ascribed, in the Index to the Hymnal Noted 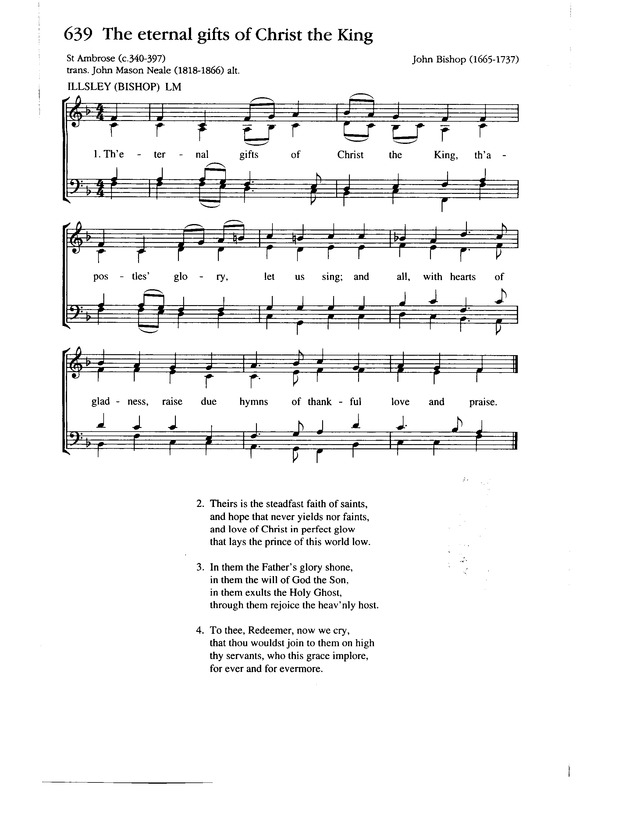 The New English Hymnal #213a

The New English Hymnal #213b