Praise for the Fountain opened

There is a fountain filled with blood Drawn from Emmanuel's veins

There is a Fountain filled with blood. W. Cowper. [Passiontide.] This hymn was probably written in 1771, as it is in Conyers's Collection of Psalms and Hymns, 1772, in 7 stanzas of 4 lines. It was republished in the Olney Hymns, 1779, Bk. i., No. 79, with the heading "Praise for the Fountain opened." It is based on Zech. xiii. 1, "In that day there shall be a Fountain opened to the house of David and to the inhabitants of Jerusalem for sin and for uncleanness." This hymn in full or abbreviated is in extensive use in all English-speaking countries.
A well known form of this hymn is "From Calvary's Cross a Fountain flows." This appeared in Cotterill's Selection, 8th ed., 1819, No. 43, in 5 stanzas of 4 lines, and consists of stanzas i.-v. very much altered. In Bickersteth's Christian Psalmody, 1833, No. 49, that same opening stanza is given, with a return, in most of the remaining six stanzas, to the original text. The question as to by whom these alterations were made, first in Cotterill's Selection off 1819, and then in Bickersteth's Christian Psalmody, 1833, is answered by R. W. Dibdin, in the Christian Annotator, vol. iii., No. 76, for July 5, 1856, p. 278, where he writes concerning this hymn:—

"About 18 years ago, I was regretting to the late James Montgomery, the poet, of Sheffield, that hymns were so frequently printed differently from the originals as written by their authors. I pointed out the very hymn mentioned in the Rev. Edward Bickersteth's Collection as an example. He smiled, and said,'I altered it as you see it there; Bickersteth asked me to alter it.'"

We know from Montgomery's Memoirs that he altered hymns for Cotterill's 1819 edition of his Selection and here by his own confession we have one of those alterations. Previously to this, however, he had acknowledged having rewritten the 1819 text as in Cotterill's Selection in these words:—

”I entirely rewrote the first verse of that favourite hymn, commencing ‘There is a Fountain filled with blood.' The words are objectionable as representing a fountain being filled, instead of springing up; I think my version is unexceptional."

In these alterations of the text the sustained confidence and rapture of Cowper are entirely lost. This may suit public taste, but it gives an entirely false view of the state of Cowper's mind when he wrote this hymn. Our positive knowledge of the poet's frequent depression of spirits and despair is painful enough without this gratuitous and false addition thereto. Five stanzas of this hymn, taken from the commonly received text, are rendered into Latin in R. Bingham's Hymnologia Christiana Latina, 1871, as: "Fons est sanguine redundans." Dr. H. M. Macgill has however taken the original text for his rendering into Latin in his Songs of the Christian Creed and Life, 1876, where it reads:—"Sanguis en Emmanuelis." In addition to Latin, various forms of the text have been translated into many other languages.

All tunes published with 'Praise for the Fountain opened'^ top

When William Cowper, who had suffered from severe depression since the death of his mother when he was just six years old, was faced with the prospect of a final law examination before the House of Lords, he experienced a mental breakdown that he never fully recovered from. Having been sent to St. Alban’s asylum for eighteen months, he began to read the Bible, which brought some peace to his mind, and he was able to leave and live with his good family friend, famed author of “Amazing Grace,” John Newton. Newton helped Cowper recover, and together Cowper and Newton wrote poetry and religious verse, which they later published in their own hymnal. “There is a Fountain Filled With Blood” is one such hymn, and it is a dramatic illustration of Cowper’s faith. The last verse in particular speaks to Cowper’s hope of redemption; it reads, “When this poor lisping, stamm’ring tongue lies silent in the grave, then in a nobler, sweeter song I’ll sing thy pow’r to save.” The mental breakdown at his examination gave Cowper a lisp and stutter that he had the rest of his life, but he knew there was a greater song to be sung than any his earthly voice could raise, a song of praise to the dying Lamb.

Cowper’s original text has undergone a few changes – many of them in the early nineteenth century by the hymn writer James Montgomery. While not all of these changes stuck, this change remains in many hymnals: in the 2nd verse, the last lines were changed from the declarative “and there have I, as vile as he, wash’d all my sins away,” to the prayerful “and there would I though vile as he, wash all my sins away.” I think this is a good change to the original, since it acknowledges that though Christ paid the price, we are still sinners in need of cleansing each and every day, waiting for the day when we will be washed clean forever.

Now, as mentioned in the teaser paragraph, the first line of this text has raised some eyebrows and made some folks uncomfortable. The imagery of a fountain being filled with blood and then standing beneath that fountain as the blood pours over you isn’t the prettiest image. But then, when did we ever say our faith was pretty? Ray Palmer writes that this criticism “takes the words as if they were intended to be a literal prosaic statement. It forgets that what they express is not only poetry, but the poetry of intense and impassioned feeling, which naturally embodies itself in the boldest metaphors. The inner sense of the soul, when its deepest affections are moved, infallibly takes these metaphors in their true significance” (Lutheran Hymnal Handbook). The particularly uncomfortable and gruesome language of the first verse is meant to be just that – an expression of our deep discomfort when we acknowledge the awesome act of salvation made for each one of us. And the hymn doesn’t stop here. As we continue to sing, the gruesome imagery is layered upon by beautiful images of joy, faith, and hope. Isn’t this hymn then a true representation of the Christian walk? Pain and guilt, washed white by God’s grace – something worth singing about.

The tune CLEANSING FOUNTAIN was written by Lowell Mason in 1830 for Cowper’s text, and was first published in Thomas Hastings’ Spiritual Songs for Social Worship (1832). When this tune is taken too quickly, as is often done, it’s difficult to really sit with the words and dwell on the meaning of the text. A fast tempo can in fact cheapen the words, causing them to lose their power. Take it slow on this one – don’t drag – but give the congregation enough time to really chew on the words. Also, the moment you sweep up to the last line into the repeats is a big moment, so don’t be afraid to really emphasize the high notes.

Here are some versions and variations for arrangement inspiration:

With some imagery of the Passion, this hymn works beautifully for both Lent and Easter, especially during Communion. However, the imagery is also generic enough to be used throughout the year as a communion hymn. 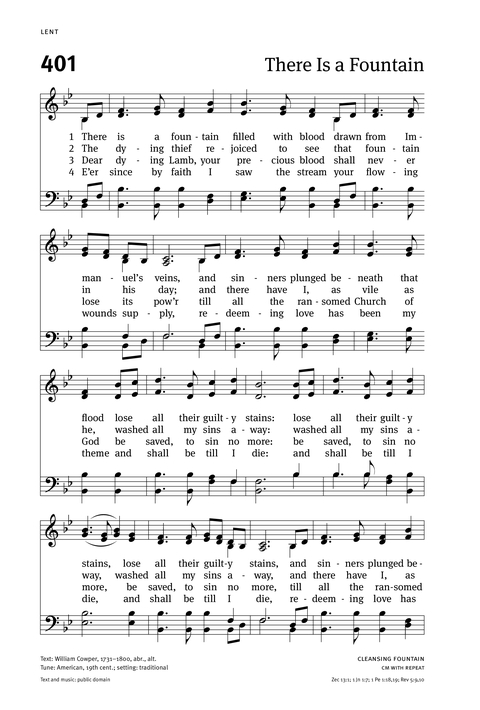 Great Songs of the Church (Revised) #217

Hymns for a Pilgrim People #336

Hymns of the Christian Life #94

Lift Every Voice and Sing II #39

Sacred Selections for the Church #160

The Hymnal for Worship and Celebration #196

Display Title: The Fountain of Life First Line: There is a fountain filled with blood Tune Title: THE FOUNTAIN OF LIFE Meter: C.M. Date: 2012
The Sacred Harp #46

The Song Book of the Salvation Army #132

Display Title: I do believe, I will believe First Line: There is a fountain filled with blood Author: William Cowper (1731-1800) Date: 1986 Subject: The Lord Jesus Christ | Atoning work
The Song Book of the Salvation Army #132