Alas, and Did My Savior Bleed

Alas, and did my Savior bleed

1 Alas! and did my Savior bleed,
and did my Sovereign die!
Would he devote that sacred head
for sinners such as I?


2 Was it for crimes that I have done,
he groaned upon the tree?
Amazing pity! Grace unknown!
And love beyond degree!


3 Well might the sun in darkness hide,
and shut its glories in,
when God, the mighty maker, died
for his own creature's sin.


4 Thus might I hide my blushing face
while his dear cross appears;
dissolve my heart in thankfulness,
and melt mine eyes to tears.


5 But drops of tears can ne'er repay
the debt of love I owe.
Here, Lord, I give myself away;
'tis all that I can do.

Written by Isaac Watts (PHH 155) in six stanzas, this text was published in Watts' Hymns and Spiritual Songs in 1707. The final line in stanza 1 originally read, "for such a worm as I."

Watts' original heading for the text, "Godly sorrow arising from the suffering of Christ," fits stanzas 1-3 well. Stanza 3 contains the profound paradox of God the creator dying for the sin of human creatures: "Christ, the mighty Maker, died for his own creatures' sin." Stanza 4 moves from penitent sorrow to gratitude and tears of joy.

Liturgical Use:
Holy Week; with sermons on atonement and redemption.

Alas! and did my Saviour bleed. I. Watts. [Passiontide.] First published in the first edition of his Hymns and Spiritual Songs, 1707, and again in the enlarged edition of the same 1709, Bk. ii., No. 9,in 6 stanzas of 4 lines, and entitled "Godly sorrow arising from the Sufferings of Christ." At a very early date it passed into common use outside of the religious body with which Watts was associated. It is found in many modern collections in Great Britain, but its most extensive use is in America. Usually the second stanza, marked in the original to be left out in singing if desired, is omitted, both in the early and modern collections.
A slightly altered version of this hymn, with the omission of stanza ii., was rendered into Latin by the Rev. R. Bingham, as "Anne fundens sanguinem," was included in his Hymnologia Christiana Latina, 1871, pp. 245-247.

All tunes published with 'Alas, and Did My Savior Bleed'^ top

The first two stanzas of this hymn address the same paradox that Paul wrote about in Romans: “For one will scarcely die for a righteous person—though perhaps for a good person one would dare even to die— but God shows his love for us in that while we were still sinners, Christ died for us.” (Romans 5:7-8 ESV) Isaac Watts shows the contrast very powerfully:

“When Christ, the mighty Maker, died For man, the creature's sin.”

The only appropriate response to the realization that such selfless sacrifice on the part of a perfect God was for the sake of the imperfect, selfish creatures we know ourselves to be is total surrender. We know we can never repay our debt of gratitude, so we sing:

This hymn is one of Isaac Watts's best known texts, and was first published in Watts's Hymns and Spiritual Songs as “Godly Sorrow arising from the Sufferings of Christ” in 1707. Ralph Hudson added a refrain in the nineteenth century, and this version is often listed under the title “At the Cross,” after the first line of the refrain. Of the six original stanzas, the second (which begins “Thy body slain, sweet Jesus, thine”) is usually omitted. Of the five stanzas in common use, the fourth (beginning “Thus might I hide my blushing face”) is the most frequently omitted. The first, second, and third are always sung, and the fifth is frequently sung.

In the third stanza, Watts originally wrote “When God, the mighty Maker, died / For man, the creature's sin.” (The Psalms and Hymns of Isaac Watts, #II.9) “God” is often changed to “Christ” to avoid literally stating that God is dead (Carlton R. Young, Companion to the United Methodist Hymnal, p. 188). In the next line, “man” is not gender-inclusive, so the line is often rendered “for his own creature's sin.” While this does solve the problem of inclusivity, it somewhat weakens the contrast between God and humanity in Watts's powerful metaphor.

There are two common tunes – MARTYRDOM (also called AVON) and HUDSON. It is fairly common for a hymnal to contain both versions of the song. The setting to HUDSON is often titled “At the Cross,” after the first line of the refrain, though sometimes both settings are given the title of the first line of the hymn.

The tune MARTYRDOM was originally a Scottish folk tune. The title may come from a Scottish village, Fenwick, which is also the last name of a Scottish Covenantor martyr, James Fenwick. Hugh Wilson, who first adapted the folk tune as a duple-meter hymn, lived in Fenwick. However, the version of the tune that is usually sung is in triple meter, by Robert Smith, a Presbyterian music minister who worked in Edinburgh.

HUDSON is named after its composer, Ralph E. Hudson. It was first published in 1885 in Hudson's Songs of Peace, Love and Joy. William J. Reynolds has argued that the text and tune of the refrain were part of the camp meeting tradition, and were merely added on by Hudson. He cites two instances printed in 1887, after HUDSON was first published, where the refrain appeared separately and was not attributed to Hudson (Companion to the Baptist Hymnal, p. 28-29). Though the absence of an example published before 1885 somewhat weakens this argument, the contrasting musical character of the stanza and refrain melodies, and the differing themes of Watts's stanzas and the refrain text support the idea of separate composition.

This hymn is usually sung during Lent and Holy Week. Because of the refrain text, “At the Cross” is also associated with the theme of personal redemption.

The two contrasting tunes associated with this text present a wide range of possibility for using this hymn in worship. In addition to MARTYRDOM and HUDSON, there is a contemporary setting of Watts's text with an original refrain by Bob Kauflin. Victor Johnson has also written a choral setting of this text to original music titled "Love Beyond Degree". Billy Madison has set "At the Cross" for violin and piano, trading the melody between the two instruments. This arrangement is also available for other solo instruments, including flute and trumpet. Anna Laura Page's piano arrangement of MARTYRDOM is part of her collection "Tell the Story". "Beneath the Cross of Jesus," "At the Cross," and "When I Survey the Wondrous Cross" are the three hymns in the orchestral medley "The Cross" by Lloyd Larson and Brant Adams. 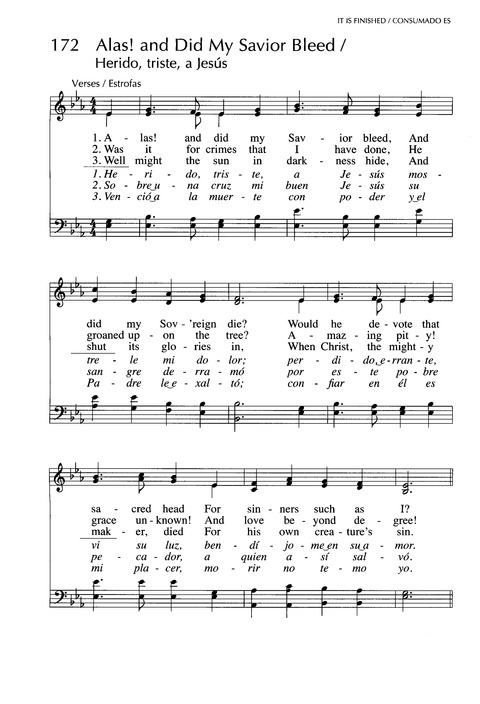 Hymns for a Pilgrim People #177

Hymns for a Pilgrim People #186

Hymns of the Christian Life #85

Display Title: At the cross, at the cross, where I first saw the light First Line: Alas, and did my Savior bleed? And did my Sovereign die? Author: Ralph E. Hudson; Isaac Watts, 1674-1748 Date: 1992
Hymns of the Christian Life #85

Lift Every Voice and Sing II #30

Sacred Selections for the Church #136

Sacred Selections for the Church #321

Display Title: At the cross, at the cross where I first saw the light First Line: Alas! and did my Saviour bleed Tune Title: MARTYRDOM (AVON) Author: Isaac Watts Meter: 8.6.8.6
Small Church Music #15

Display Title: At the cross, at the cross where I first saw the light First Line: Alas! and did my Saviour bleed Tune Title: HUDSON Author: Isaac Watts
Small Church Music #50

The Hymnal for Worship and Celebration #188

The Hymnal for Worship and Celebration #208

The Song Book of the Salvation Army #105