This Is My Father's World

This is my Father's world And to my listening ears 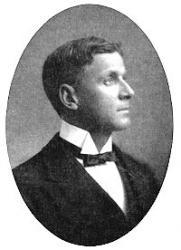 Maltbie D. Babcock (b. Syracuse, NY, 1858; d. Naples, Italy, 1901) graduated from Syracuse University, New York, and Auburn Theological Seminary (now associated with Union Theological Seminary in New York) and became a Presbyterian minister. He served the Brown Memorial Presbyterian Church in Baltimore, Maryland, and the Brick Presbyterian Church in New York City. In Baltimore he was especially popular with students from Johns Hopkins University, but he ministered to people from all walks of life. Babcock wrote hymn texts and devotional, poems, some of which were published in The School Hymnal (1899). Bert Polman… Go to person page >
^ top

TERRA BEATA was originally a traditional English folk tune, a variant of which, entitled RUSPER, appeared in The English Hymnal in 1906. Franklin L. Sheppard (b. Philadelphia, PA, 1852; d. Germantown, PA, 1930) arranged the tune for Babcock's text and published it in the Presbyterian church school h…

All tunes published with 'This Is My Father's World'^ top

In ancient times, people believed that as the planets revolved in the universe, they made music or harmony. This is the belief Maltbie Babcock referred to in the line, “and round me rings the music of the spheres.” Though this belief has since been disproven, we know that objects in space do in fact emit sounds. Even more amazing, the ocean is also making noices at its very lowest and darkest depths - sounds which scientists are still unable to identify. The whole universe is singing a song of its creation, revealing something to us about He who created it. But, as Albert Bailey writes, “in stanza three, the author realizes that all’s not right with the world” (The Gospel in Hymns, 553). Creation is fallen and broken. Yet, it also still belongs to God. We are thus charged to listen attentively to the voice of God in His world – from the heights of space to the depths of the ocean - and witness how He restores it, listening for our own calling to be stewards of Creation.

Maltbie D. Babcock wrote this poem in sixteen stanzas of four lines each. Some hymnals, such as the Presbyterian Hymnal and The Psalter Hymnal include only two verses. There are a number of variations in how the phrases are arranged. For example, The Worshiping Church uses the first four lines of verse two as the first half of verse two, and the last four of verse two as the first half of verse three. There are also a number of changes in the text. The Worshiping Church and Worship and Rejoice end verse two with, “He trusts us with his world, to keep it clean and fair – all earth and trees, all skies and seas, his hand the wonders wrought.” A number of hymnals, including the Baptist Hymnal 1991, end the third stanza with “The battle is not done; Jesus who died shall be satisfied, And earth and heaven be one.”

TERRA BEATA, Latin for “beautiful world” was originally a traditional English folk tune. It was arranged by Franklin L. Sheppard for Babcock’s text. This light and lilting tune requires bright foundation stops or instrumentation, such as guitars, recorders, flutes, or upper-register piano. Watch out for weightiness – keep the tempo moving and the instrumentation light. Fernando Ortega has a very simple and beautiful piano-led version of the hymn.

This hymn is very easily learned by children, and is a very popular Sunday School song or children’s choir piece. It can be sung as a hymn of praise during any service, but fits particularly well in services focusing on creation, providence, or stewardship. You could sing this as an opening hymn, after a litany about creation and God’s providence for His people, or as a closing hymn. It could be very powerful to pray that God would reveal Himself to His people, and that we would be ready and listening for His presence. Follow this with a time of silence in which you calm your hearts to listen, and then sing this hymn. 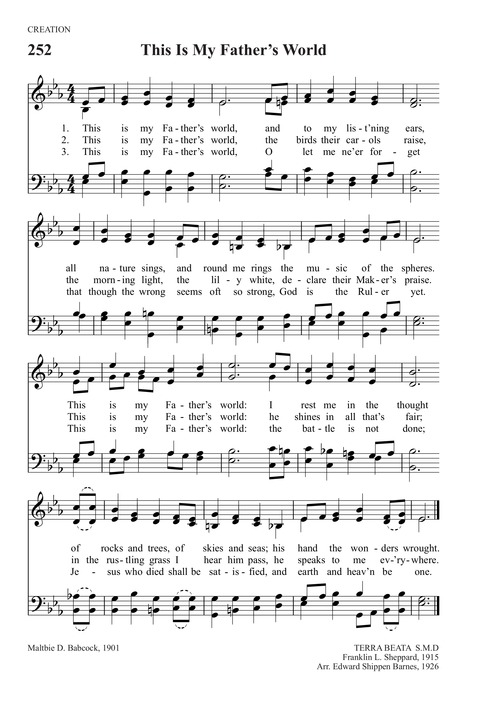 Hymns for a Pilgrim People #263

Hymns of the Christian Life #28

Hymns to the Living God #41

Praise! Our Songs and Hymns #56

Display Title: This Is My Father's World First Line: This is my Father’s world, and to my listening ears Tune Title: TERRA BEATA Author: Maltbie D. Babcock Date: 1979 Subject: Worship | The Father
Praise! Our Songs and Hymns #56

Display Title: This Is My Father's World First Line: This is my Father's world Tune Title: TERRA BEATA Author: Maltbie D. Babcock Meter: SMD Date: 1985 Subject: In The Beginning | Creator of Heaven and Earth; Warfare, Spiritual |
Rejoice in the Lord #14

Sacred Selections for the Church #578

The Hymnal for Worship and Celebration #58

The Song Book of the Salvation Army #42